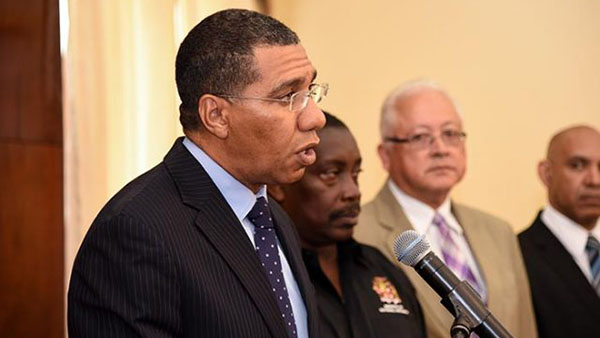 KINGSTON, Jamaica, March 19, 2018 (CMC) – Prime Minister, Andrew Holness, yesterday, declared a State of Public Emergency in sections of the central parish of St. Catherine, in an effort to fight crime.

Holness, who made the announcement during a press conference at the Office of the Prime Minister, declared that the State of Emergency was effective as of Sunday and will remain in place, initially for 13 days.

According to Holness, this was necessary in order to facilitate enhanced security measures in areas faced with high levels of criminality, which have threatened pubic order.

The Prime Minister added that under the enhanced measures, security forces will have the power to search, curtail business operating hours and detain persons without a warrant.

As a result, all persons using roads in and out of the area will be subject to being searched.

The area under curfew is the base for one of the most notorious gangs operating in the islands – the Clansman gang.

Operating hours for businesses and other establishments in sections of the St. Catherine North Police Division, where the State of Public Emergency was declared, have been adjusted in keeping with stipulations under the enhanced security operation.

According to the Constabulary Communication Unit (CCU), the closing hours for all businesses in Spanish Town, Linstead and Bog Walk are now between 6:00 p.m. and 7:00 p.m.

The police encourages persons to adhere to these conditions, to avoid being prosecuted for violations.

The specified boundaries within which the operation is being undertaken are:

The CCU has indicated that the security forces will also be placing special focus on bus parks within the targeted communities.

The Prime Minister says he will address Parliament shortly on the measure.