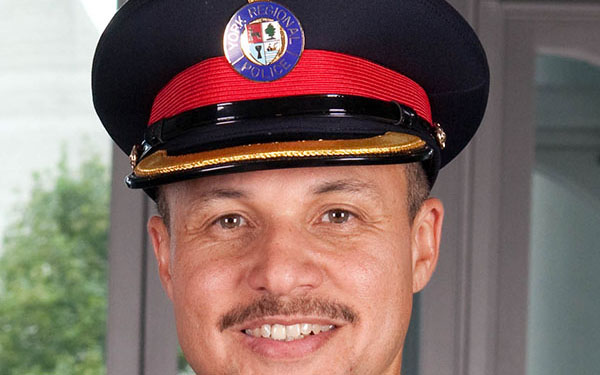 YORK REGION, Ontario – Superintendent André Crawford made history today (Wednesday, November 6) when he was sworn in as deputy chief of York Regional Police. He is the first Black or visible minority person to hold that office.

In all of his 27 years as a police officer of the York Regional Police, the Jamaica-born police officer never thought he would rise to the level of deputy chief.

He views his appointment as recognition of the contribution that he has made to the police service over those years.

“I’m very pleased that I’ve been able to work hard and get to this level of the organization. It’s not something that I had planned, not a position that I had even seen myself in,” said Crawford, noting that he thought that a female officer would have been appointed as there has never been a female deputy chief. He also thought that there were other officers who could have been considered for the executive command team post.

During his 27-year career with the police service, his assignments have included uniform patrol duties in #2 District and #5 District, criminal investigations, intelligence, sexual assault, crimes against children, homicide/missing persons and training and education.

“The Board is very pleased to announce Superintendent André Crawford as the Region’s new Deputy Police Chief. He brings exceptional investigative and operational knowledge and a strong commitment to community. He is an excellent addition to the Executive Command Team’s mandate to deliver excellence in policing services,” said Chair Frank Scarpitti of the Regional Municipality of York Police Services Board.

Prior to his new appointment as deputy chief, Crawford was the superintendent in charge of community services responsible for building partnerships and engaging citizens through innovative outreach programs, crime prevention initiatives and volunteer opportunities.

Crawford said that as superintendent, he really pushed the youth program because the youth are the future and it is necessary to look after the youth to ensure that “when we leave, it’s still a safe place to live.”

He said it’s all about crime prevention, which is about taking care of the youth. “If I can save a youth when they’re in their pre-teens and their teens and they don’t commit a crime, that’s prevention. You can’t measure stuff like that,” he said.

The York Regional Police works closely with schools, different organizations and community groups to try and reach as many children as they can. Anti-bullying programs were introduced in schools in grade 3 instead of the earlier practice of only in grade 6.

They run programs from junior kindergarten to high school and there are university students who are even hired as summer students with the service.

Deputy Chief Crawford was born in Kingston, Jamaica but grew up in Innswood Estate, just outside of Spanish Town. He attended Mount Alvernia elementary school and Campion College, one of the top high schools in Jamaica.

In 1972, he immigrated to Canada with his parents and three siblings where they lived in Downsview first and then moved to Willowdale.

He attended A.Y. Jackson Secondary School and then gained a Bachelor of Arts Degree in Fine Arts from the University of Waterloo where he was also an avid football player.

When he graduated from university, he worked for the Royal Bank of Canada for six years, and as he was getting closer to being 30, he started looking around for some other opportunity.

“I can tell you that policing wasn’t one of the things that I’d ever grown up thinking that I’d ever do. I have to be quite honest about that,” he said, noting that, “back home in Jamaica being a ‘Babylon’ isn’t highly looked at.” ‘Babylon’ is a popular word used in Jamaica in reference to police officers.

However, after conversations with a cousin who works with the Toronto Police Service and a Toronto police officer who used to make deposits at RBC where Crawford worked, he started looking seriously at the possibility of working with the police service.

Crawford said policing here, compared to Jamaica, is more about giving back to the community, making a difference in the community and being a part of the community in a positive way.

This became attractive to him and he applied to the Toronto Police Service and was in the process for almost a year but then was stopped in his tracks when Toronto had a hiring freeze in 1985-1986.

His cousin soon called and told him that York Regional Police was hiring and three months later he was on the job.

Crawford is a graduate of the Rotman School of Management Police Leadership Program and the Senior Management Institute for Police in Boston.

“We created a mental health team where we partner an officer with a social worker. The officer gets all kinds of training about mental health and dealing with crisis,” he said.

He described the relationship that the police have with the social agency as wonderful, noting that both try to the best of their abilities to deal with people in the region who are suffering from mental health issues.

“I would like to thank our Board for recognizing our commitment to our organizational values of competence and leadership and for supporting our dedication to building leaders from within. I am extremely pleased to welcome Superintendent Crawford to our Executive Command Team, and I look forward to working alongside him as we continue to build an organization that is vision- inspired, mission-focused and values-driven,” said Chief Eric Jolliffe.

Crawford has also been distinguished with a Chief of Police Award for investigative excellence and with a Gold Medal from the Human Rights & Race Relations Centre.

“Their success is my success because they brought us all up to be good people and to be respectful, work hard, earn a decent living, take care of one another – the typical Jamaican village thing, everybody takes care of everybody else,” he said about the role that his parents played in his life.

Sergeant Tony Brown, a veteran of the York Regional Police, remembered a time when he was the only Black officer in the police service. He says, he is very proud that a Black police officer has risen to the position of deputy chief.