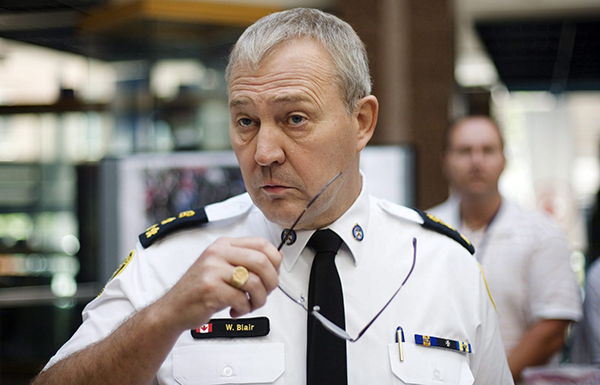 TORONTO, Ontario – The Black Action Defense Committee (BADC) wants racial profiling and carding to stop and to achieve this it has filed $65 million and $125 million class action lawsuits against Toronto Police Chief Bill Blair and the Toronto Police Services Board (TPSB) and Peel Police Chief, Mike Metcalf, and the Peel Police Services Board, respectively.

On November 15, the Police Chief and the TPSB were served with a statement of claim for damages in the amount of $50 million for racial profiling (and carding), “which is a violation of his constitutional rights of the class of persons represented by the plaintiff pursuant to the Canadian Charter of Rights and Freedoms (the “Charter’); and the Ontario Human Rights Code.”

And on November 25, BADC, joined by the Justice is Not Colour Blind (JNCB) organization, along with three civilian plaintiffs, filed a class action lawsuit, against the Peel Police Chief and the city’s Police Services Board, claiming $70 million for racial profiling (carding), $40 million for punitive messages and $15 million for exemplary damages.

The four defendants have within 20 days of being served the suit to file a statement of defence.

The plaintiff also wants “an order requiring the defendants to desist from engaging in and condoning racial profiling against the plaintiff and all class members and against all African-Canadians and other ‘colourful’ minorities.”

“Literally, if we could just get that order, we don’t care about the money because once such an order is issued then the message would be sent to the police that you better be sure that the person you are carding or arresting has indeed committed a criminal offence or is about to commit a criminal offence,” said Munyonzwe Hamalengwa, the lawyer retained by BADC and who filed both claims.

He said, it is very difficult to predict the outcome of lawsuits, especially one involving class action.

“Canada is not a class action nation, per se. The US is much more experienced in class action but in a perfect world, in a perfect judicial system this suit should succeed because there is multi, provable, statistical evidence and human experience that racial profiling and carding take place in Canada, Ontario, Toronto on a continuing and systematic level,” he said.

Hamalengwa said, the police chief, deputy chief and chair of Toronto Police Services Board have all acknowledged that racial profiling exists and the statistics are irrefutable.

Released on November 11, the report by the board chair recommends as a policy that the “Board rejects and does not condone any individual or institutional policing practice that results in profiling generally and racial profiling specifically, whether intentionally or by impact, against individuals because of their membership of particular groups identified by characteristics including, but not limited to, race, ethnicity, sex, sexual orientation, age, disability and socio-economic status.”

Mukherjee said the purpose of this policy is to eliminate conscious or unconscious profiling of individuals as a result of the practice of carding while supporting the legitimate collection and retention of information needed for bona fide investigative purposes.

The chair also recommended that the gathering and retention of contact information under clearly defined circumstances, based on bona fide reasons and proper supervision can be a legitimate tool for effective police work related to criminal investigation and crime prevention.

He noted that the most recent analysis by the Toronto Star of September 28-29, 2013 is more extensive than the previous ones.

“It is also the most disconcerting in that it shows that at the very time when the Board and the Service were establishing stronger policies and procedures, implementing enhanced training and education, and going through a comprehensive process to change organizational culture and practices through the Human Rights Charter Project, carding – especially carding of Black and Brown youth and poor White youth – was at an all-time high continually year after year,” he said, noting that further action needs to be taken.

The PACER Report states that: “There are communities in Toronto who believe they have experienced biased-based policing during their interactions with the police. This is especially prominent in the Black community, and particularly among Black youth, based upon some of their community engagement experiences.”

The report notes that, “one of the most important practices impacting the relationship between the police and the community is the manner in which officers engage with the community and how those interactions are documented.”

It further states that, “the process of recording these interactions, referred to in the community as “carding” has been at the centre of this debate.”

The PACER report has 31 recommendations and one of its goals is “to assess and address issues of racial profiling and bias in community engagements (at both the individual and systemic levels) to enable the delivery of bias-free police services.”

On November 18, the Board held a special meeting at Toronto City Hall where 23 deputations from the public, organizations and community groups were presented on both reports.

At its meeting of October 7, the Board approved a motion to hold a special public Board meeting dedicated to soliciting community input.

In her deputation, Bev Salmon, a former Toronto city councillor, voiced strong opposition to the practice of police street checks and carding.

“I urge you to cease this carding practice that disproportionately impacts too many of our innocent Black youth, particularly socially and economically deprived males who have been caught in the web of criminalization. The effect of being carded can have severe and long lasting consequences for too many innocent people. This is not the South Africa of old,” she said.

Peter Rosenthal, a lawyer, said street checks are not in compliance with the Toronto Police Services Act and that, in his view, to continue carding is inappropriate.

“What the practice of carding is doing is creating generations of citizens that hate the police because of the constant harassments. This precludes these generations from having respect for the police and makes them hostile to the police,” said Kingsley Gilliam of the BADC.

Representatives of the Law Union of Ontario, Ontario Human Rights Commission, Canadian Civil Liberties Association, Justice Is Not Colour Blind, Osgoode Society Against Institutional Injustice all called for carding to be stopped.

The Toronto Police Service is the only jurisdiction in Canada practicing carding.

“The Board must exercise its legal right and responsibility as stated in the Police Services Act, to protect the public by ruling that the practice of carding/street checks/community engagement, shall cease immediately, “ said Joy Bullen, a parent and concerned citizen.

Bullen said she supported the recommendation in a July 2 letter to the Board from Barbara Hall, chair of the Ontario Human Rights Commission, that “the current practice be stopped until policies and procedures are fully developed and completely and transparently assessed against the Code and the Charter.”

In the PACER Report, the police said their legal services consulted with three eminent lawyers and all three were unanimous in stating “police officers may, for recognized policing reasons, approach members of the community and seek their voluntary cooperation in responding to questions and that such police conduct does not violate an individual’s rights under the Canadian Charter of Rights and Freedoms (Charter).”

When pressed by lawyers, who presented deputations, and the Board to reveal the names of the eminent lawyers from which the police sought advice, Deputy Chief Peter Sloly, said they were: Donald McLeod, Murray Segal and Alan Gold.

The deputy chief said the PACER Report is not perfect but it is a work in progress.

Mukherjee described his report on carding as a starting point of conversation and wants to present a new version of the board’s proposed policy to the public, which will take into consideration the deputations.

The meeting ended with a consensus by the members of the Toronto Police Services Board that the issue must be decisively dealt with in December.

They, especially councillors Michael Thompson and Mike Del Grande, do not want the matter carried over into 2014.