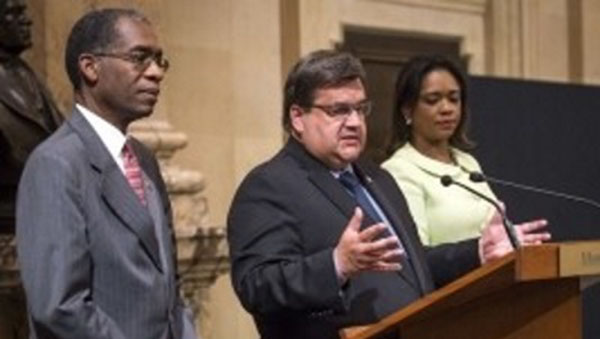 MONTREAL, Canada, August 9, 2017 (CMC) – Haiti says it is prepared to accept its nationals if they are not accepted by Canada, as two ministers, including Foreign Affairs, Minister Antonio Rodrigue, arrived here for talks with Canadian officials, following the arrival of several thousand Haitian nationals seeking asylum in the country.

Rodrique, accompanied by his colleague, Stéphanie Auguste, the Minister of Haitians Living Abroad, said they have been mandated by President Jovenel Moïse to meet with Canadian and provincial authorities and determine what could best be done, regarding the situation of migrants flowing to the Canadian border and to facilitate their integration into Canadian society.

Speaking at a joint news conference with the Mayor of Montreal, Denis Coderre, the Haitian Foreign Minister said that the visit was aimed at “reassuring” Haitian nationals, who had experienced the trip to Canada, if necessary “if there were any, for whatever reason, do not have the identification, passport or other documents they need, we have come to assess this situation with them”.

The Haitians fear that as many as 60,000 of them in the United States could lose their “Temporary Protection Status” (TPS) and be expelled from that North American country.

“Maybe people see that the new migration policy in the United States is unfavourable to their conditions. Maybe they see Quebec and Canada as more hospitable,” he said, noting that Haitians speak French “and perhaps they think they can better integrate”.

“If there are people who are not accepted in Canada, Haiti will welcome them….The government is making efforts to improve things in Haiti. Not only to keep nationals, but to allow those who want to return to find their place in Haitian society,” Rodrique added.