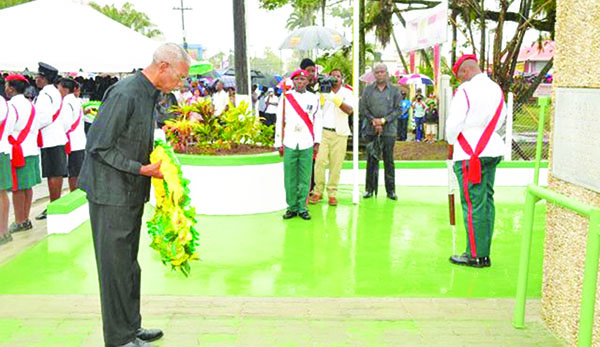 Photo above is of His Excellency, David Granger, laying the first wreath at the newly refurbished Independence Arch at the wreath laying ceremony in observance of Guyana’s 49th Independence Anniversary. Photo credit: GINA.

First to arrive were Prime Minister, Moses Nagamootoo, and his wife, Seeta Nagamootoo. Their arrival was followed by that of His Excellency, David Granger, and his wife, First Lady, Sandra Granger. Upon his arrival, the Head of State took the Presidential salute, which was followed by a two-minute silence for those who struggled for Guyana’s Independence.

Meanwhile, in his address to the nation on the occasion, President Granger said, the event should be seen as a solemn remembrance of the lives and labour of Guyana’s heroes.

“Today celebrates the Independence gained on the May 26, 1966, after 350 years of Dutch and British colonisation. We are assembled at this national monument, in solemn remembrance of the lives and the labours of our heroes.”

The Head of State said, that homage must be paid to those who agitated for decades to achieve national Independence.

Now being the heirs to what has been accomplished, the President said, all Guyanese have a duty to actualise the vision of the nation’s founding fathers, who fought to create the new state.

“We had a duty to continue the work they started to transform a united colony to a united nation. Today is a day of thanksgiving, to give thanks for the gift of Independence.”

Independence, President Granger said, was not the work of one person or one party, but it was the product of a movement of the Caribbean, and the Guyanese people, and a process that took place over a long period of 50 years.

Workers, he said, were the true pioneers of Independence, as they were the ones who rebelled against British colonialism, first during the distress after the first and second world wars in 1918 and 1945 respectively.

Reflecting on Guyana’s history, the President made mention of the 29 workers who were killed and 115 who were injured during the labour rebellion of the 1930s.

While hailing the efforts of workers in Guyana gaining its Independence, the President said, the legislators also played a significant role.

President Granger, reflecting on history, added, that it was Theophilous Lee, the first President of the British Guiana Trade Union Council, a Chinese Guyanese and a member of the Legislative Council, who moved a motion there, that led to the establishment of the Waddington Commission.

This commission, he said, in turn, led to the introduction of Universal Adult franchise, and also this is the same franchise which all Guyanese were allowed to exercise on May 11, in the General and Regional election.

“It is the Waddington Commission also, which put us on the path to internal self governance, and finally Independence. Today we pay homage to our legislators for their leadership,” he said.

In addition, the President said, that the suffrage of the ordinary citizen must not be forgotten as they bore the brunt of the disturbances of 1964, as the government of the day employed every devious device to delay election under the proportional representation system.

Noting that Guyana has indeed come a far way, President Granger said, this is the very system that installed his new government recently.

“Today we pay homage to the 176 persons who were killed during that awful years during the struggle for Independence,” he added.

Meanwhile, going forward, the President called on all citizens not to dwell on the pains of the past, but look with faith to the future.

In wishing the Guyanese nation happy Independence, the President closed his speech with a quote, saying, “Independence is a means to an end, the end must be to the changing of our society and the revolutionising of the economy, change indeed, is never ending.