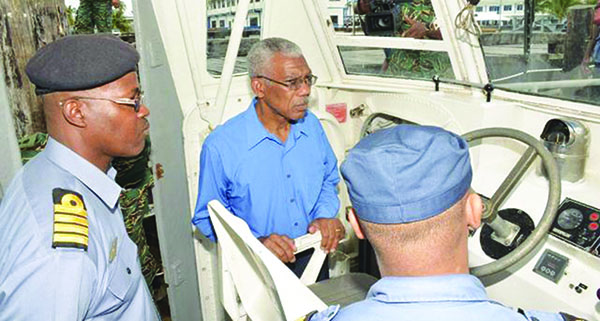 Photo above: Guyana President, David Granger, centre, being briefed on some of the daily operations of the Coast Guard while onboard one of the unit’s patrol vessel. Photo courtesy of GINA.

GEORGETOWN, Guyana (GINA) — Acknowledging that there are some challenges in the daily operations of the Guyana Defence Force (GDF) Coast Guard, Head of State David Granger has given his commitment towards institutional strengthening of that unit.

During a tour of the Ruimveldt Coast Guard Headquarters today, President Granger was briefed on what currently obtains, and what is required to bring about optimum results and efficiency.

Speaking to the importance of the Coast Guard, the President said, when it was established 25 years ago the maritime threat existed, and today it still exists.

“But, as they say eternal vigilance is the price we have to pay for freedom, and one of the most vulnerable frontiers of Guyana is this fore frontier, this coastland and we can only depend on you to protect this entire frontier.”

Reminding the ranks of their role, the President observed that they all have important law enforcement functions, in terms of combating maritime crimes, including smuggling, piracy and all forms of trafficking.

“These crimes distort the economy, most of the crimes of contraband and trafficking contribute to keeping Guyana poor, and that is why you’re given a law enforcement function,” the President told the ranks.

Describing the ranks as Guyana’s best and first line of defence against maritime crimes, President Granger pointed out that no other agency can effectively carry out the mandate that rests on the shoulder of the coast guards.

He however, noted that they must not shy away from their responsibility to protect Guyana’s assets, particularly humans and military resources.

Equally, the President said, it is imperative to ensure that foreign trade is protected, while ensuring that citizens feel safe as they traverse Guyana’s waterways.

The Head of State added that while it is important to protect the country’s territorial integrity, the presence of the Coast Guard must be felt in every area.

Speaking on the issue of training, President Granger said it is his view, that specialised training must be given on issues relating to the United Nations Convention on the Law of the Seas, since Guyana has a very large sea frontier.

Each rank, he said, should have a clear understanding of both land and sea frontier issues. He noted that while the Coast Guard has a role to play, his administration intends to resolve some outstanding border dispute issues amicably.

“The fact is that unless we resolve these maritime claims, we will not be able to exploit a source of one of our most important resources that is offshore petroleum.”

Meanwhile, the president has assured that under his administration, the Coast Guard will be given the much needed attention it requires. Discussions will soon begin in an effort to bring the Coast Guard up to strength in terms of manpower as the possibility of a Reserve arm of the unit will be explored.

Training both locally and overseas would be given much priority while the upgrading of equipment will also be looked at.

However, in the interim, the President called on the ranks to be responsible by taking care of the equipment that are in hand, as they have over the years costed the government huge amounts.

In addition, some of the recommendations, which were made by the Disciplined Forces Commission several years ago, will now be implemented in an effort to address some of the challenges facing the Coast Guard.

President Granger further assured that his administration would continue as long as it is financially possible to provide the resources needed to protect the territorial integrity of Guyana.

While congratulating the ranks for the professionalism shown over the years, the President reiterated the call for every effort to be directed towards the suppression of criminality, and to ensure that piracy and smuggling are brought to an end.

The Head of State was also given a tour of the entire facility on the base.