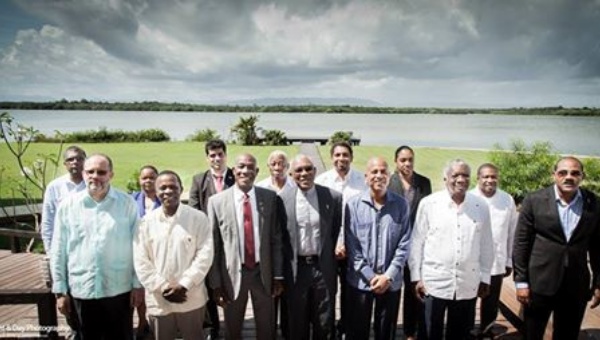 PLACENCIA, Belize (CMC) – Caribbean Community (CARICOM) leaders have re-affirmed their support for Belize and Guyana in their territorial disputes with Guatemala and Venezuela respectively.

A communique issued at the end of the 27-th CARICOM Inter-sessional summit here, last Friday, noted, that the leaders had also “expressed concern at the continuing grave human rights situation of Dominicans of Haitian descent threatened by statelessness” in the Dominican Republic.

CARICOM had suspended the application from the Spanish-speaking Caribbean Forum (CARIFORUM) country for membership within the 15-member regional grouping, in light of the Constitutional Court ruling that stripped Dominicans of Haitian descent of their citizenship.

Earlier this month, the Inter-American Commission on Human Rights (IACHR), in a report on the human rights situation in the Dominican Republic, noted, “the situation of statelessness, generated by judgement 168/13 that has not yet been completely corrected after the measures adopted by the Dominican State, is of a magnitude never before seen in the Americas.”

The CARICOM leaders agreed that the human rights situation of Dominicans of Haitian descent must form part of the Agenda of the CARIFORUM-EU policy or political dialogue.

Regarding the Guyana-Venezuela border dispute, where Caracas is claiming ownership of a substantial portion of the South American country, the regional leaders said, they received an update on the recent developments with respect to the controversy between the two countries.

They noted, that February 17, 2016, marked the 50th anniversary of the signing of the Geneva Agreement of 1966 between the Parties, which was intended to provide a solution to the controversy arising from Venezuela’s contention that the 1899 Arbitral Award, which definitively settled the land boundary between Guyana and Venezuela, is null and void.

“Heads of Government also noted, that the Secretary General of the United Nations, having had discussions with the Heads of State of Guyana and Venezuela in September 2015, has since made a proposal to the two countries on the way forward towards a decisive end to the controversy.

“Heads of Government expressed their full support for the role of the United Nations Secretary General and his efforts, in keeping with the provisions of the Geneva Agreement, to bring the controversy to a definitive and judicious conclusion,” according to the communiqué.

It noted, that the regional leaders “affirmed their unequivocal support for the maintenance and preservation of Guyana’s sovereignty and territorial integrity”.

On the issue of Belize and Guatemala, the regional leaders expressed their hope that a referendum would be called early in both countries to decide on whether to submit Guatemala’s claims to the International Court of Justice for a final ruling.

The communiqué said, that the leaders “encouraged both Belize and Guatemala to continue their efforts at constructive engagement and building of friendly relations for the betterment of their peoples.

“Heads of Government recognized the important role of the Organization of American States (OAS) in support of the efforts of the Belize and Guatemala governments to secure lasting peace and development.

“They called on the international community to support the efforts of these two countries, and to be especially generous in their support for the sustained involvement of the OAS in these efforts,” the communiqué stated, adding, that the regional leaders also reaffirmed their “unequivocal support for the maintenance and preservation of Belize’s sovereignty and territorial integrity”.