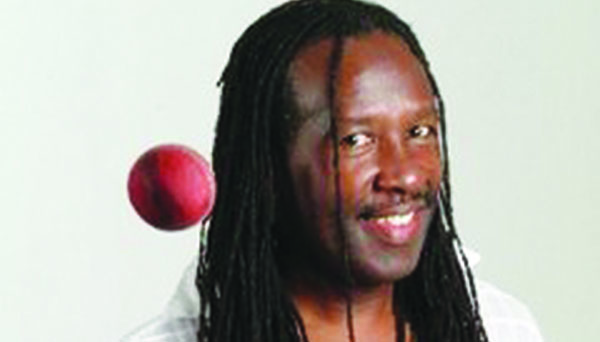 David Rudder To Be Honoured By UWI

Photo above is of David Rudder toying with a cricket ball. Photo credit: davidmichaelrudder.com.

PORT OF SPAIN, Trinidad CMC – Ajax resident, Calypsonian David Rudder, is among eight Trinidad and Tobago nationals, who will be honoured by the St. Augustine campus of the University of the West Indies (UWI) when it holds its graduation ceremony later this year.

UWI said, that the eight people are being awarded for their sterling contributions to Caribbean development in areas ranging from business and culture to music and law.

In October and November, UWI will confer honourary degrees on 21 individuals during graduation ceremonies on the four campuses, Cave Hill (Barbados), Mona (Jamaica), St Augustine and the Open Campus.

UWI Chancellor, Sir George Alleyne, will confer the degrees at the UWI graduation exercises of each campus. As is customary, one of the honorary graduands will address the audience at each of the ceremonies.

“I just do the work and I give it to the people, I never expect anything. I’m a Caribbeanist because of the love that people have shown me from across the region and they are the reason that I do the work,” said the Canada-based Rudder.

UWI singled out Rudder classics such as ‘Ganges meets the Nile’, ‘Hosay’, ‘The Power of the Glory’, ‘High Mas’ for their impact in further inculcating all facets of the country’s social fabric into song saying that he more than any other local artiste has been recognised internationally for his integration and capture of the essence of Trinidad and Tobago’s multicultural society through his music.

The campus will pay tribute to Besson, founder of Paria Publishing, for his contribution to the establishment of a library at the President’s House at the time of the presidency of Noor Hassanali.

He was also the convenor of the Cabinet-appointed work group occasioned by the centenary anniversary of Tobago becoming a ward of the unified colony of Trinidad and Tobago, 1887-1987.

Sabga is being recognised as a leading entrepreneur in the region who manages one of the most diversified conglomerates in the Caribbean with some 6,000 employees.

Sabga is also the Chief Executive of the ANSA McAL Group and has been pivotal in the expansion of the group’s business through St Kitts, Grenada, Barbados, Guyana and the United States and made significant headway into introducing new commodities and business models in the region.