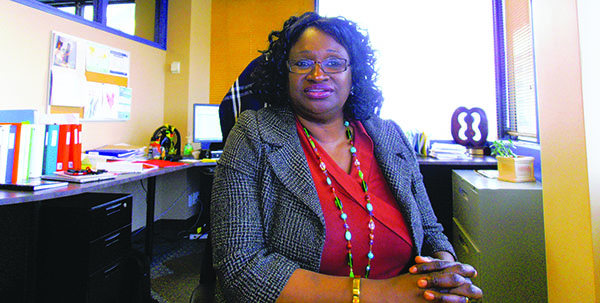 Photo above is of Simone Atungo relaxing in her spacious office. Photo by Lincoln Depradine.

TORONTO, Ontario — In July 2014, Simone Atungo left a very secured job at Mount Sinai Hospital, where she worked for almost five years as Director, Community Development & Integration. She had decided to quit to take up a contract job with Toronto Community Housing, because she saw it as “an opportunity to expand my own professional growth and development’’.

The TCH job – Interim Vice-President of Resident & Community Services – has also enabled Atungo to continue with her passion for helping others, especially marginalized groups such as African-Canadians.

“Since being here at TCH, I just see the great potential to continue to directly impact many people’s lives and so I quite enjoy the work,’’ Atungo told Pride News Magazine in an exclusive interview.

“The team that I have is amazing; talk about a dedicated, committed group of people; you couldn’t find such a group of people, anywhere else, who are dedicated to making a difference in the lives of the residents.’’

Greg Spearn, President and CEO of TCH, on commenting on Atungo and the department she heads, told Pride that “the Resident & Community Services Division that Simone leads is doing important work that really makes a difference in improving the quality of life in our communities, including connecting our vulnerable residents to hundreds of local social service agencies, engaging residents so their voices are heard in decision-making, and overseeing the operations of our Community Safety Unit.”

Spearn was commenting following an official ceremony in which the Toronto Blue Jays, through the Jays Care Foundation, announced additional funding for a partnership program with TCH.

The ceremony was held at the Toronto Blue Jays Club House and included team members and officials of the baseball club; TCH representatives; students and youth; and Toronto Mayor John Tory and his special advisor for Youth Engagement and Development, Gwyneth Matthew-Chapman.

The money, which brings the Foundation’s funding for the Rookie League of the TCH to $500,000, was received after a collaboration resulted in the drafting of an application by Atungo and Sherwin Modeste, Manager of Grants Development and Sponsorship at Toronto Community Housing. The funding application was submitted last fall.

The Jays-sponsored TCH Rookie League, for kids 6-12 years from more than 60 Toronto Community Housing neighbourhoods, has been in operation each summer for the past 27 years.

More than 1200 children, who received items such hats, water bottles, backpacks, gloves and T-shirts – imprinted with the names of current Toronto Blue Jays players – participated in the 2015 summer program.

Atungo says the additional sum received last week from the Toronto Blue Jays will be used to expand the Rookie League program.

“It will be expanded to be a year-round program and to involve more youth from Toronto Community Housing,’’ Atungo said.

“This new funding announcement was an exciting day for us, for the Jays Care Foundation, for the Blue Jays as an organization, and for the residents of the TCH communities,’’ she added. “The children and youth were all very excited to be there. They had a chance to be in the Blue Jays Club House, to meet some players, meet the Mayor, and get some Blue Jay gear.’’

Atungo has more than 28 years combined experience working in the healthcare and social services sector including for not-for-profit community-based organizations, and in primary care and acute care hospital settings.

As a healthcare worker, and now as a TCH executive, Atungo is motivated by the same thing. “Just being able to impact the lives of the residents, that’s the thing that drives me and gets me here every day.’’ She conceded.

“It could be in a big way like this where there is new money that we asked for and got it; or, it could be just in the small ways where I just go out into the communities and I talk with people to better understand what their experience is, and try to figure out how the work that we do can support them to really live better lives and have healthier outcomes.’’

TCH has various and vast partnerships, said Atungo, “all with that common focus of trying to improve lives. We pay particular attention, of course, to the children and youth; encouraging them to stay the course, to apply for scholarships, pursue post-secondary education and end up in a really great career where you feel fulfilled and you’re making a meaningful contribution to society.’’

A former executive director at the Parkdale Community Health Centre, Atungo came to Toronto from Guyana at age 7. Shortly after arriving here, she said, her father left the family, leaving her mother to raise three children on her own.

She said she began volunteering while still at high school, “assisting people who are experiencing barriers to achieving success’’.

“The people who experience barriers to accessing health and social care services are the people that I really have honed in on. It kind of resonates with some of the barriers my mother faced,’’ explained Atungo, who is married with three children – ages 16, 13 and 7.

“I saw them as so poised and eloquent,’’ said Atungo. “They always smile beautifully whenever you see them. But behind those smiles, I knew there was a lot of struggle and hardship that they had endured to get where they were and to be able to maintain those positions.’’

Atungo remains very concerned with equality of opportunities for African-Canadians.

“I’d like to see that we have the same access to opportunities as any other community does; such as equality of opportunities to pursuing education and employment,’’ she said.

“Racism is still very much alive and prevalent and can create a huge barrier for us in terms of our progress. I would like to see barriers removed and see young people feeling like they can aspire to be anything.’’