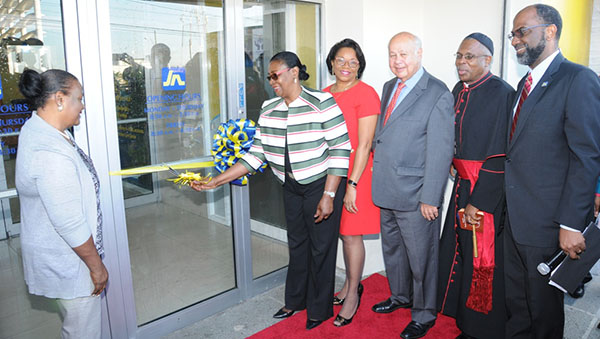 JN Bank Commences Operations With A Covenant With Members

ST. ANDREW, Jamaica February 3, 2017 — The Jamaica National Group launched Jamaica’s first commercial bank owned by its “savers and borrowers”, JN Bank, on Wednesday, announcing a covenant with its members and Jamaicans to treat them with dignity and to work with them to improve their financial outcomes.

The Bank’s covenant was presented to members during its opening on February 1 and is published and available to the public on its website and in its branches.

Maureen Hayden-Cater, the managing director of the new bank, pledged that JN Bank will provide convenient and innovative solutions, supported by advanced technologies; and that it will offer “competitive interest rates while charging fees lower than market rates” for its services.

“This is our covenant, ladies and gentlemen. This is the way of your JN Bank,” she declared, “We are no ordinary bank… We are different. We are the only commercial bank, fully owned by our savers and borrowers and, in that vein, we are established to serve our Jamaican members and customers, wherever they reside around the globe.” 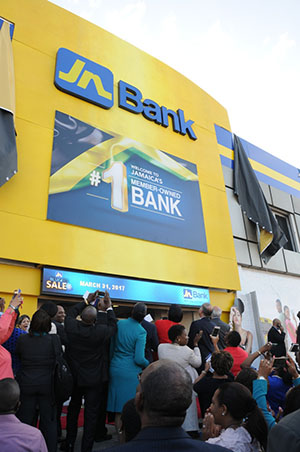 The new JN Bank sign at the company’s main office in Half-Way-Tree, St Andrew is unveiled to fanfare during a ceremony on February 1.

Chairman of The Jamaica National Group, of which JN Bank is a subsidiary, Oliver Clarke, said the organisation has had a strong history of stability and service and that the reorganisation of the Group will strengthen JN’s ability to protect the savings of its members.

The chairman added that under the reorganisation, the company has been separated into non-financial and financial entities, which are owned by a single mutual organisation, The Jamaica National Group.

“We are proud to be this unusual organisation owned by our members in this country,” he said at Wednesday’s opening at the Bank’s main office in Half-Way-Tree, St Andrew.

Earl Jarrett, head of The Jamaica National Group, noted that the conversion to JN Bank was tantamount to a “rebirth” for Jamaica National, as it expands its reach through products and services which support the organisation’s philosophy of improving people’s financial outcomes.

He underscored that the launch of JN Bank highlights the capability and strength of Jamaicans.

“JN has always had to find its own way. It never had a head office [overseas] to tell it what to do. It has had to design its own strategy and establish its own path and our people have had to deliver world-class standard,” he said.

The bank’s special opening activities include a 50 percent discount on all premiums for all new personal lines motor insurance through JN General Insurance (JNGI) branch network and JNGI online. The bank is also offering no processing fee on JN Auto and unsecured loans, waiver of select in-branch fees, as well as free membership in the Jamaica Automobile Association.

Hayden-Carter says the bank will provide clear, relevant and timely information to assist members to make the right decisions; and handle their requests, suggestions and complaints with care and with the highest level of confidentiality, fairness, integrity and urgency.

“Our vision is to provide extraordinary life experiences for all of our members; create wealth and sustain long-term value through the quality of the products, services and initiatives we will implement,” Hayden-Cater has assured.

“JN expects its members to hold the organisation to its promise to provide consistently better service to our members than any other financial institution in this country,” Clarke stated.

Outlining a list of “firsts” by Jamaica National over its 142-year history, Hayden-Carter made the case that becoming the country’s first commercial bank to be mutually-owned was only a natural progression for the company, as it sought to build on its philosophy of improving people’s lives.

“Today, The Jamaica National Group continues that rich tradition of facilitating people’s desire to improve their financial outcomes by being bold and courageous with the launch of JN Bank, a commercial bank which is dedicated to the financial growth and success of its members,” she said, pointing out that the Bank would be a positive force for success.

And General Manager Jarrett concluded, “I believe that at Jamaica National, we have demonstrated that, as a country, we can achieve great things; our conversion is evidence of that. The doors of JN Bank are open for all to enter in.”