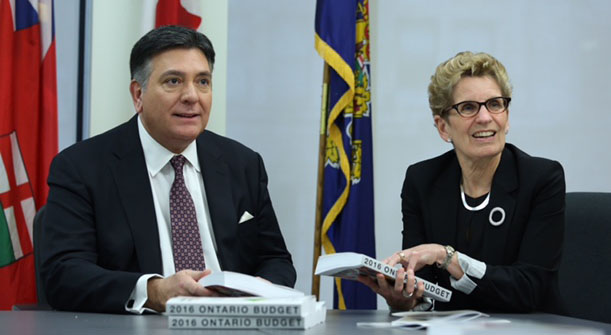 Minister of Finance and Premier

Photo above: Ontario Minister of Finance, Charles Sousa, and Premier Kathleen Wynne, check out the 2016 Budget.

TORONTO, Ontario — Yesterday, Finance Minister, Charles Sousa, tabled the 2016 Ontario Budget: Jobs for Today and Tomorrow, that outlines plans to, starting in the 2017-18 school year, offer “average college and university tuition (that) will be free for students with financial need, from families with incomes of $50,000 or less”.

The government said, tuition will also be made more affordable for middle-income families, through the new Ontario Student Grant (OSG) — “a simple, integrated, upfront grant” that it plans to create.

The Budget promises that, “More than 50 per cent of students from families with incomes of $83,000 or less, will receive non-repayable grants, in excess of average tuition, and no Ontario student will receive less through the OSG than they are currently eligible for, through the Ontario Tuition Grant.”

Cheryl Jenson, President of Algonquin College, said, “I applaud the efforts by the government to help ensure more Ontarians have access to a quality postsecondary education.

“We believe education is one of the best ways to ensure a better quality of life for your family, and new investments in college-based applied research — as outlined in the budget — is an important boost to innovation within our communities. We also congratulate the province for their continued investment in postsecondary education and training for First Nations, Métis, and Inuit learners.”

The government says, it will also expand financial support for mature and married students, and access to interest-free and low-cost loans for middle- and upper-income families will be increased by reducing their expected parental contributions.

“Most students will have less debt than they would under the current system, and the maximum Ontario Student Assistance Program debt level will be capped at $10,000 annually for higher-income families.

“Ontario will continue to offer financial assistance for students who have difficulty repaying their student loans,” outlined the government in the Budget.

Minister of Finance, Sousa, said, “The plan invests in people’s talents and skills and their ability‎ to get and create the jobs of the future, by expanding access to high-quality college and university education.”

The 2016 Budget also outlined the next phase of the government’s plan to create jobs and economic growth stating, that the Kathleen Wynne administration had created more than 600,000 jobs since the recessionary low in June 2009.

“After 13 years of reckless spending and mismanagement, the Wynne Liberal Government is attempting to balance its books on the backs of Ontario’s students, seniors, and families, it said in a release yesterday.

The Ministry of Finance is forecasting growth in Ontario, of real GDP of 2.5 per cent in 2015 and 2.2 per cent in 2016, adding that Ontario’s economic growth is now outpacing national growth, and is expected to continue being among the strongest in Canada over the next two years.

The government adds, its plan “is creating good jobs today in communities across Ontario by investing in infrastructure and in a low-carbon economy, driven by innovative, high-growth, export-oriented businesses.

In this Budget, the government forecasts investing more than $137 billion, over the next 10 years, in roads, bridges, public transit, hospitals and schools, supporting more than 110,000 jobs each year, on average.

The province notes, that it remains on track to generate $5.7 billion, over time, from maximizing the value of government-owned assets and, net revenue gains from the sale of qualifying assets will be dedicated to the Trillium Trust, to help fund public transit, transportation and other priority infrastructure.

Toronto mayor, John Tory welcomes, and is encouraged by, the province’s commitment to fund public transit and housing.

“Our relationship with the province is a vitally important one, and I’m encouraged to see that the 2016 Ontario Budget acknowledges Toronto’s priorities including transit and housing. I welcome the province’s commitment to SmartTrack and look forward to working collaboratively to deliver this important project to the people of Toronto,” siad the mayor.

The government said, it will also update the Long-Term Affordable Housing Strategy to continue the transformation of Ontario’s housing and homelessness system, and continue to move ahead with its Special Needs Strategy to help children and youth with special and complex needs receive timely and effective services at home, at school, in the community, and as they transition to adulthood.

Ontario says it will invest $333 million, over five years, to redesign and improve autism services.

In 2016, the government revealed it will increase rates by 1.5 per cent for adults receiving Ontario Works and people with disabilities relying on the Ontario Disability Support Program, and will also “provide a further top-up to those with the lowest social assistance rates — singles without children receiving Ontario Works — bringing their total increase to $25 per month, which is $100 more per month than they received in 2012”.

“The government is also continuing to transform Ontario’s universal health care system to give Ontarians faster access to the right care, now and in the future.

“Highlights include increasing funding to hospitals by $345 million; lowering wait times for key services; creating more integrated, team-based primary care; making more care available at home and in the community; proposing to make the shingles vaccine available free for eligible seniors aged 65 to 70 — saving them about $170 in out-of-pocket expenses; and investing an additional $75 million in community-based residential hospices and palliative care, for a total investment of about $155 million over three years,” said the Budget document.

“This was an opportunity for the government to show the people of Ontario that they were listening,” said PC Leader Patrick Brown. “Unfortunately, life is about to get more expensive for the people of Ontario. Tax revenue is expected to rise by more than $3 billion to pay for Liberal scandal, waste, and mismanagement. Ontarians will see $1.9 billion more in personal income tax, $700 million more in corporate taxes, and $500 million in carbon taxes.”

The government says, it has increased choice and convenience for Ontarians by responsibly expanding beer sales to grocery stores, and is now expanding wine sales, and adds, this Fall, up to 70 grocery stores will be authorized to sell wine, beer and cider together across Ontario, and that wine will eventually be available in up to 300 grocery stores.

“We continue to have very serious concerns about the credibility of the government’s numbers,” concluded Brown.

“The government’s revenue projections for 2017-18 are $4 billion higher than the Financial Accountability Officer’s best-case scenario he laid out last fall. If this Government is going to balance the budget, there will be more taxes and more cuts in store.”

With the economy expected to continue to grow and the government’s ongoing commitment to transform government programs and services, Ontario is forecasting to remain balanced in 2018-19, said the 2016 Budget paper.

“The province’s economic plan supports good jobs today, in communities across Ontario, by investing in infrastructure and in a low-carbon economy driven by innovative, high-growth, export-oriented businesses. The plan also helps all Ontarians achieve a more secure retirement,” said the Minister of Finance.

Michael Van Cooten is the Publisher and Editor of Pride News Magazine. He can be reached at pridenews@bellnet.ca.