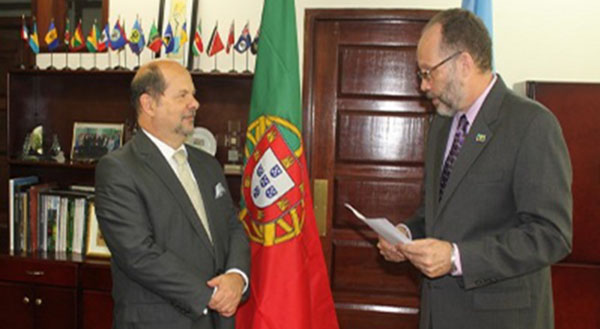 GEORGETOWN, Guyana, Mar 5, (CMC) – The Caribbean Community (CARICOM) is calling on Portugal to help remove a number of Caribbean countries from a list of non-cooperative tax jurisdictions developed by the European Union.

Portugal is among several European countries that have deemed some CARICOM member states as non-cooperative tax jurisdictions, even as the regional countries insist they are in compliance with standards established by the Financial Action Task Force (FAFT), the Global Forum and other international bodies.

LaRocque told the Portuguese envoy, that CARICOM is gravely affected by the listing, as financial services are of vital economic importance to the Caribbean Community, with implications for its efforts at growth.

“It would certainly be a step in the right direction if this unjust and unfair action be rescinded,” he said, noting, that CARICOM would also welcome Portugal’s advocacy on the swift implementation of the 2030 Development Agenda, ensuring sensitivity towards small states, and the provision of financing for development.

He also called for support for CARICOM’s effort to stem the trend toward graduation of Small Island Developing States (SIDS) from access to concessionary financing.

In response, the Portuguese diplomat said, that his country has always supported the CARIFORUM-EU Economic Partnership Agreements, and this remains for his country, the main framework for developing and strengthening ties with the region.