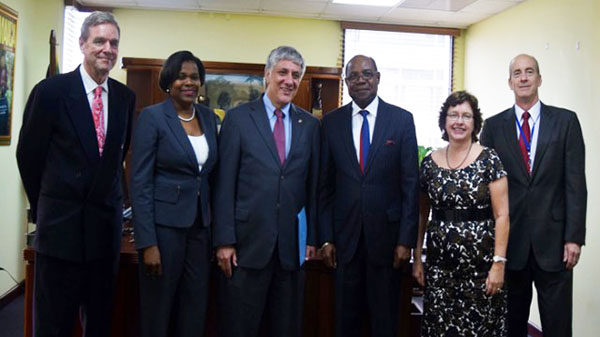 KINGSTON, Jamaica, Mar. 10, (CMC) – The prospects for pre-clearance operations privileges for Jamaica were on the agenda of talks between newly appointed Tourism Minister, Edmund Bartlett, and US Ambassador to Jamaica, Luis Moreno, when they met, yesterday.

Bartlett who indicated, “It is crucial for us to strengthen the relationship between Jamaica and the United States,” said, pre-clearance operations will help the drive investment in the tourism sector and open doors for the entry of more US brands in the local tourism industry.

Pre-clearance facilities, which are being expanded by the United States, currently applies to 15 foreign airports in six different countries. Caribbean islands which have such privileges, include The Bahamas, Bermuda, Aruba as well the Dominican Republic (Punta Cana).

Pre-clearance allows US Border inspection and clearance of commercial airline passengers and their goods and is typically the same inspection which a traveller would undergo at a US port of entry. As a result, passengers who go through pre-clearance do not have to undergo a second inspection upon arrival in the US.

Among the other issues discussed were efforts to further boost visitor safety and steps to enhance the Tourism Courtesy Corp.

This is Ambassador Moreno’s second meeting with a member of newly appointed Cabinet, which was sworn in on March 7.

The US Ambassador and his staff are also the first foreign officials to meet with Bartlett since his return to the Ministry in his second stint as Tourism Minister.