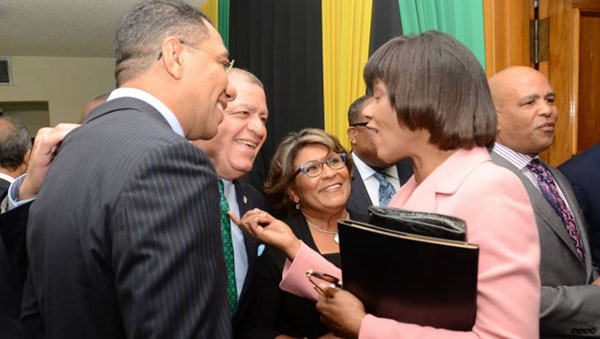 Photo above: Prime Minister the Most Hon. Andrew Holness (left), shares a light moment with Leader of the Opposition the Most Hon. Portia Simpson Miller (right), along with Minister of Finance and Public Service Hon. Audley Shaw (2nd left) and Member of Parliament for South Trelawny, Marisa Dalrymple-Philibert. Occasion was the swearing in of Members of Parliament and Senators yesterday (March 10), at the opening of the new Parliament at Gordon House. Photo credit: JIS.

KINGSTON, Jamaica, Mar. 11, (CMC) – New Prime Minister, Andrew Holness, has promised Jamaicans that the main focus of his administration will be on economic growth, job creation, debt reduction and improving the well being of Jamaicans.

Holness — in an address, yesterday, at the official opening of Parliament and the swearing in of Members of Parliament — also said, his government has started the process of fast-tracking investment projects and consulting on tax reforms.

“We have started work, with the support of the IMF, on our proposed reforms to the tax system, to ensure that we have already started to take charge of the potential threats of diseases. “I pledge to be an activist Prime Minister , I pledge to lead by example ….”

“I am sure that the realities of the seat distribution of Parliament is not lost on us, and I am equally sure that we are mindful of the challenges. This is a moment that requires cooperation. This moment requires maturity, partnership, consensus-building and, importantly, the patriotism that I am sure resides in all of us. This is the time for us to put Jamaica first,” he said. 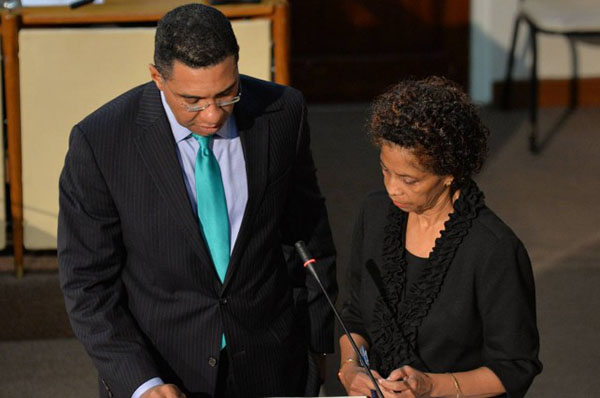 Prime Minister, the Most Hon. Andrew Holness, takes the Oath of Office during the swearing-in of Members of Parliament on March 10 at Gordon House. Clerk of the Houses of Parliament, Heather Cooke, observes the proceedings. Photo credit: JIS.

And leader of the main opposition People’s National Party (PNP), Portia Simpson Miller, promised that the Parliamentary Opposition will be strong, vigilant and firm.

However, she issued a warning to Holness.

Concerning her leadership of the PNP, Simpson Miller refused to say whether she will be stepping down as party President, following the PNP’s defeat in the February 25 general election.

Over the past two weeks, there have been mounting calls for Simpson-Miller and other high-ranking officials of the Party to walk away and allow for rebuilding.

At yesterday’s swearing ceremony, 21 members of the Senate were sworn in, and all but two members took the oath of office. They were Derrick Kellier, who won the St. James Southern seat and was in the parish monitoring a magisterial recount, and Dr. Omar Davies, who is still recuperating following his recent hospitalisation.