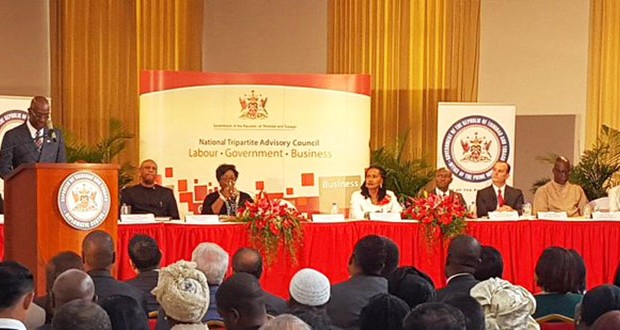 PORT OF SPAIN, Trinidad, Mar 15, (CMC) – Trinidad and Tobago, today, launched its National Tripartite Advisory Council (NTAC) with a warning from the labour movement that it is not prepared to be a sacrificial lamb in the socio-economic development of the twin-island republic.

Prime Minister, Dr. Keith Rowley, also sought to highlight the importance of the Council to his six-month-old administration, saying, it is not intended to be a talk shop or a social gathering.

He described the formation of the Council as, “the dawn of a new era in genuine democratic governance of Trinidad and Tobago”.

“If ever Trinidad and Tobago needed frank, open and honest discussion and an unmitigated willingness to take all constructive views and opinions on board, as we travel along the path to nation-building, that time is now,” Rowley said, noting, that his government is not prepared to gloss over the “troubling issues standing in the way of our national progress.

“This is about finding the most cost-effective and practical solutions. The issues of government and governance, clinically designed to give Trinidad and Tobago the best chance of standing shoulder to shoulder, once again, with the most progressive and influential developing nations of the world.”

He told the launch that, the NTAC should be regarded as “restoring Trinidad and Tobago to the pride of place which it once enjoyed as one of the most enlightened, progressive and modern societies for a country of its size.”

But President of the Joint Trade Union Movement (JTUM), Ancel Roget, told the ceremony, that while the “horse has already bolted” and thousands of workers have lost their jobs in recent weeks, the labour movement is insisting that everyone must be prepared to make sacrifices for the socio-economic development of the country.

He said, that for the past 78 years the labour movement has played a significant role in the development of the oil-rich, twin-island republic, but warned “we come to the table…not as sacrificial lambs for anybody’s agenda”.

He said, given the prevailing socio-economic conditions here, every effort must be made to put back the horses in the stable and, “as we navigate these waters, we want to ensure that every worker…every member of business in the country make the sacrifice he or she is called upon to make.

“It is not going to be a case of the worker being asked to make sacrifices but in our respectful view it is a sacrifice to be borne by everybody,” he said, acknowledging, that the “journey won’t be easy, but it is a journey to which we have no choice”.

NTAC will comprise 19 members, with six each from the public and private sector and labour movement and a representative from the Tobago House of Assembly. It will be chaired by Planning and Development Minister, Camille Robinson-Regis.

Executive member of the National Trade Union Centre (NATUC), Michael Anisette, said, that NTAC should allow for critical thinking and should be a “pragmatic approach to problems (and if) dialogue is allowed and we put Trinidad and Tobago first, I believe we can solve our problems”.

President of the Trinidad and Tobago Chamber of Industry and Commerce, Robert Trestrail, said, with the country facing an uncertain future, given the global situation occasioned by the drop in oil prices, it is important for there to be an alternative to the present socio-economic policies.

He said, the private sector group would continue to play a significant role in achieving a “robust and long lasting” economy.

Trestrail said, that the Council could also play “a pivotal shift in the way business has been done”.

Earlier, Rowley said, that the decision to establish the Council is “perhaps the most far-reaching measure that we have undertaken to date”.

He said, his administration anticipates that “all of our people will reap abundant fruit from the seed which we have planted here today.

He said, the Council will have as its main focus, “the role of providing sound and informed multi-sectoral advice to the government, not only on matters which fall under their terms of reference, but on such matters which warrant their informed and balanced counsel from time to time”.

“We anticipate, and we expect, that advice coming to us would be based on sound data,” he said, noting, that his administration will soon establish the Statistical Institute “which will provide the unbiased and sound data base on which discussions can be advanced at the tripartite council”.

He said, the Council will also engage civil society and the public at large in discussions on issues, as may be determined from time to time, and that it will also seek to promote consensus-building and democratic involvement among key stakeholders.