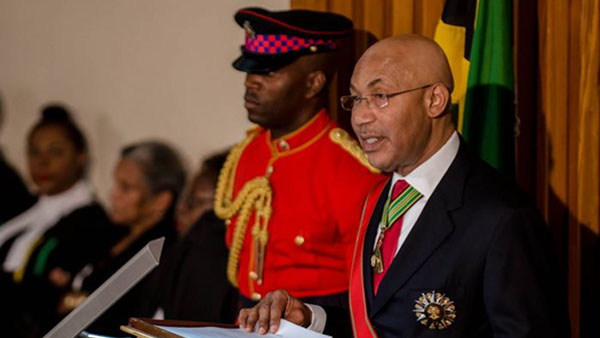 KINGSTON, Jamaica, Apr. 14, (CMC) – Governor General, Sir Patrick Allen, says there is urgent need for the restoration and trust in the Government as this is a “key ingredient in building a partnership for prosperity”.

Sir Patrick, in delivering the Throne Speech on Thursday following the usual pomp and pageantry of the ceremonial opening of Parliament, said Jamaicans are obligated to conduct to behave in a manner that commands the respect of all.

“The Jamaican people have a right to demand quality service from their government; in this regard, this new administration will be accelerating efforts to strengthen public sector efficiency and responsiveness,” he said.

According to Sir Patrick, the first step to building an accountable government is transforming the efficiency and effectiveness of government.

“The restructured and smaller Cabinet sends a strong signal of the intention of the administration to extend and evolve the reform of the governance system.”

The Throne speech with the theme “ Building a Partnership for Prosperity” also reiterated the government’s plan to continue with the public sector transformation and modernization program of trade and investment facilitation, managing public sector costs and government efficiency and service delivery.

Sir Patrick said, during this fiscal year, the Andrew Holness-led administration will pursue initiatives that include the implementation of an electronic business registration system, a trade facilitation program, the rollout of the ICT program and implementing the human capital management enterprise system.

Concerning the national insurance scheme, he said the Ministry of Labour and Social Security will reduce pension processing times. There will also be the introduction of direct deposits for new pensioners.

In addition, there will also be a comprehensive review of the NIS Act.

Sir Patrick also said the Disabilities Act will be fully implemented during the year.

In the area of health, Sir Patrick said primary health care will continue to be a major focus of the administration.

“Government will continue to stress the importance of partnership and community mobilization in promoting and protecting the health of our people, and will be taking steps to improve its capacity to identify and respond to public health issues,” he added.

Concerning Tourism, he said the Tourism Ministry will reposition the sector to generate higher growth rates in job creation, visitor arrivals and earnings.

“The tourism linkages hub will be strengthened, to create pathways and opportunities to facilitate strong economic linkages between tourism and other sectors, such as manufacturing, agriculture and entertainment,” he intoned.

He added that legislation is also being developed to create a tourism workers’ pension scheme.

“This pension scheme will be tailored to deal with issues of seasonality, self employment and contract work in the tourism industry,” he revealed.

The Andrew Holness administration will also place emphasis on trade and investment promotion through the Ministry of Foreign affairs and Foreign Trade.

Sir Patrick said the Ministry will “leverage our Jamaican Diaspora in diplomacy, investment and trade ….. help to manage and maximize Jamaica’s existing bilateral trade relations as well as relations within the Caribbean Community (CARICOM) and between CARICOM and third states.

“Other areas of focus will include the environment – in that the government will review existing environmental laws and seek to strengthen sports, entertainment, culture and heritage.”

Sir Patrick said the legislative agenda for 2016/2017 will include a Constitution Amendment Bill to replace the Queen with a non-executive President as Head of State, the Arbitration Bill, which governs the conduct of domestic and international arbitration in the country, and the focus on fixed election dates for parliament and the creation of term limits for the Prime Minister.