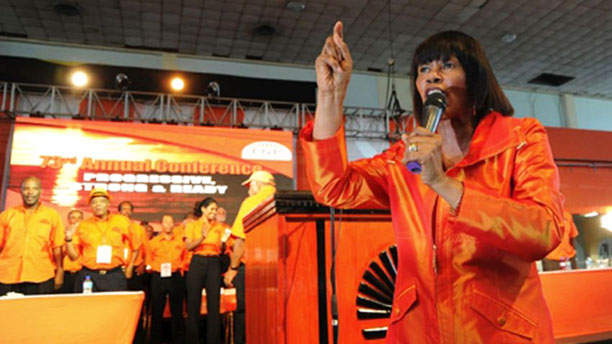 KINGSTON, Jamaica, July 18, 2016 (CMC) – The Leader of the main opposition People’s National Party (PNP) says she will not allow her detractors to destroy the party, as she criticised those who continue to call for her to step down, following the loss at the February 25 general election.

“With each setback we must regroup and renew our party; renewal is not about discarding people who have given their lives to the movement, it must include looking at where we went wrong and correcting the problem,” she told the 43rd annual conference of the PNP Women’s movement on Sunday.

“I have always supported renewal. In fact many of the loudest voices for renewal were brought in by me. I will not allow the PNP to be destroyed by those who will not take the time to learn its best tradition and principles,” the Opposition Leader added.

Simpson-Miller led the party into the general election and lost to the now-ruling Jamaica Labour Party (JLP) by one seat.

Since then there have been calls for the 7o-year-old politician to step aside, with some party members urging her to publicly declare a timeline for her departure from the coveted position.

But she has, so far, resisted their calls and have received the endorsement of South East St. Ann legislator, Lisa Hanna, and her colleague North West St Ann Member of Parliament, Dr. Dayton Campbell.

Meanwhile, Peter Bunting, the PNP’s spokesman on National Security, says he will not be challenging Simpson-Miller for the top post during the elections scheduled for September.

Bunting had, earlier this year, confirmed his desire to lead the PNP, and it had been widely expected that he would have mounted a challenge for the leadership at the upcoming conference.

However, at a constituency conference for Central Manchester on Sunday, he said that he will not be doing so this year.

Nominations for posts within the party closes on Wednesday.