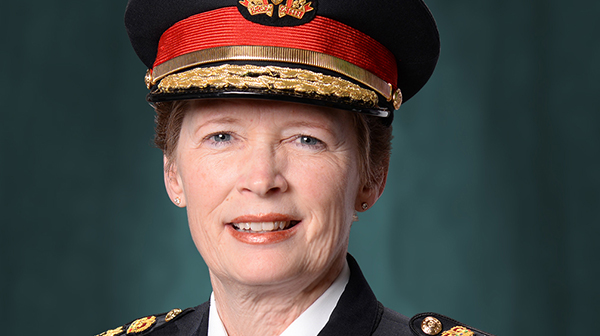 Peel Region's Police Chief Jennifer Evans said she recognizes that there is much work to be done between her force and the region's Black community.

PEEL REGION, Ontario August 31, 2016 — Black community leaders and Peel Regional Police are working in partnership to improve the relationship between the police and the community.

A press release from Peel Police notes that after listening to the concerns of community members throughout the region, Peel Regional Police Chief Jennifer Evans sought direct change that would influence these important relationships.

Angela Carter of PRP BAC says the committee was formed by Chief Evans which was her way of reaching out to the community, noting that the chief has also done that with the South Asian community in Peel. There are also plans to establish a Chinese Advisory Committee.

“Community leaders from all aspects of the black community within the Region of Peel agreed to participate on a committee to bridge the gap,” said the police.

They include members of organizations such as the United Achievers, Free For All Foundation, Congress of Black Women, Malton Black Development Association, Black Community Action Network (BCAN), RESQ Youth International, United Way and school board trustees.

Carter said the police once had a race relations committee in the 90s but this is the first time that there are advisory committees for specific communities.

The objective of the Black Advisory Committee is to act as a resource and advisory group to the Peel Regional Police on matters of policy, communication and training.

The group says it brings to the table an independent voice that reflects the needs and concerns of the community and is committed to working with the Police to reduce the negative perceptions of both the Black community and the Peel Regional Police.

The committee was established during the period when the Black community was dealing with a number of unsettling issues such as street checks.

In the report, “Fighting An Uphill Battle: Report on the Consultations into the Well-Being of Black Youth in Peel Region,” done by the F.A.C.E.S. of Peel Collaborative in 2015, it found that Black youth are over-represented in Canadian prisons even as the incarceration rates of young men have steadily declined since the introduction of the Youth Criminal Justice Act in 2003.

The F.A.C.E.S. report – Facilitating Access, Change and Equity in Systems – examines the social well-being of Black youth in Peel Region and the supports needed to ensure the opportunity to thrive.

“Black youth in Peel reported their distrust of Peel Police due in large part to racial profiling of blacks by police and the fact that police tend to stop blacks for questioning more than other groups. They also reported not feeling comfortable with police in schools. One of the factors related to negative interaction between Black youth and the police is the inaccessibility of safe recreational spaces for Black youth due to the fees charged for using those spaces or the cost of public transportation to get to those spaces,” said the report about policing in Peel.

It noted that instead of going to communal recreational spaces such as community centres, tennis clubs, and programs for youth, Black youth would often “hang out” in shopping malls or public parks which do not charge a fee for being on the premises.

However, in a society characterized by anti-Black racism, such gatherings of young Black men is not valued and is seen as potentially dangerous and, thereby, cause for surveillance by the police, the report found.

Among the recommendations for the police services in Peel are: mandatory training of police officers about the Black community and how to provide services to the latter in culturally appropriate ways, and the hiring of Black police officers.

The report also calls for a review and modification of the practice of having police in schools and the impact on Black students. It wants a focus on using police as positive role models for Black youth and as a way of building trust and respectful relationships between the police and Black youth.

The F.A.C.E.S report also recommends data collection and public reporting on interaction between police officers and members of the community by characteristics of citizens (gender, race, age, disability, etc.). In particular, issues of racial profiling should be examined through the collection and analysis of police contact and arrest data by race and gender in Peel Region.

In the meantime, the Peel Regional Police Black Advisory Committee believes that solutions can be developed by engaging in difficult and courageous conversations that address the underlying systemic biases and mistrust that impact the relationship between the two groups.

It says it recognizes the chief’s leadership in reaching out to the diverse communities in Peel, through the formation of various advisory committees; being the first chief to implement the provincial recommendations around street checks; and in initiating a series of town hall meetings to hear from members of the community.

“We’ve brought the issues to the police. We let her know how we felt about the street checks in Peel Region, how it’s affecting the community, how we feel, how the average Black person feels when they have to be stopped by the police, who just feel that they have been stopped because of their colour. We discussed this openly with her,” said Carter, who noted that the F.A.C.E.S. Report generated a lot of discussion last year in various organizations in Peel and was a catalyst for the formation of the advisory committee last year.

“She has publicly stated why she believed that street checks were necessary, however, after the provincial government had done its community discussions and laid out a number of recommendations for police services across the province to adopt, she was one of the first to start implementing the recommendations,” Carter said about Chief Evans.

She said from their discussions with Chief Evans, the police have reviewed their training material and they are looking at implementing more training for the rank and file that will reflect the concerns of the advisory committee.

She said the committee would monitor what is being done to see the progress of changes that are implemented.

The police said through the committee, “open dialogue is the norm and difficult conversations are challenging us to come up with creative solutions.”

Following recommendations from the committee, the Recruiting Bureau hosted two recruiting events and the advisory committee invited police to participate in events such as the Free For All Basketball Awards Night and Community Basketball camps, the United Achievers Dinner as well as participating in the Success With Age and Guidance (SWAG) graduation.

At a recent meeting, Chief Evans confirmed that she welcomes the equity audit and publicly acknowledged this at her presentation to regional council on June 23.

“She is committed to working with the Police Services Board and looks forward to any recommendations flowing from this equity audit. She hopes this will also highlight the ongoing initiatives already implemented by Peel Regional Police,” said the police.

The advisory committee is encouraging members of the Black community to engage with Chief Evans and her officers by attending the town hall meetings, inviting them to community events, considering a career with Peel Regional Police, visiting their website at peelpolice.ca and following them on social media.

“We’re working hand in hand with the police to make sure that there is transparency, to make sure that we’re actually forging better relations and that the community as a whole will benefit from the interaction,” said Carter.

Chief Evans said she recognizes that there is much work to be done and is encouraged by the dedicated community leaders who are engaged with her to make a difference.