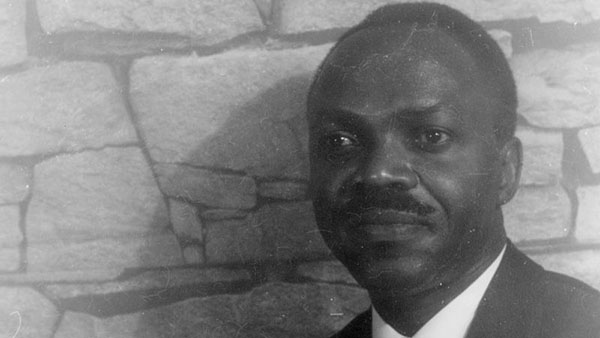 The British-American novelist, writer, teacher, and diplomat, best known for his stories of social conditions and racial discrimination against black people, was born June 27, 1912 in the colony then-called British Guiana.

Braithwaite had a privileged beginning in life as his mother and father were graduates of Oxford University, in history and engineering respectively.

An alumnus of the colony’s best secondary school, Queens College, Braithwaite describes growing up with education, achievement and parental pride surrounding him, acceding to a desire to return to the mother country following graduation.

By the late 1930’s, he was attending graduate school at Cambridge University, where he graduated in 1949 with a doctorate in physics and confidence that he was well suited for his chosen field.

During World War II Braithwaite joined Britain’s Royal Air Force as a pilot, although one of the very few non-white airmen in the RAF, he did not feel discriminated against.

He was soon to discover, like many black veterans, that his background and qualifications meant nothing in the civilian world, as his applications were repeatedly rejected for various jobs and also housing.

It was at this point that Braithwaite had his first experience with racism.

Disillusioned, Braithwaite was finally hired as a teacher at a predominantly white secondary school in a tough bombed-out East End neighbourhood, “hating it at first, treating it as a temporary exercise in survival until something better came along”.

He taught for nine years, long enough to be called “Sir” by his students.

While employed at the London welfare department, helping minority children find homes, Braithwaite began thinking about his classroom experiences and was urged to write a book, by a London couple, who had taken him in as a surrogate son. Initially reluctant, he quickly completed a manuscript.

For the title, he remembered a package of monogrammed cigarettes his students had given him, on the wrapping of the box, they had stuck a piece of paper and written on it, ‘To Sir, With Love,'”

The novel was adapted into a Hollywood film version, starring Sidney Poitier as Braithwaite (renamed Thackeray), and Judy Geeson as Lulu. The film was a box-office success, and the title song became a No. 1 hit that year. The setting for the film was changed from postwar London to the “swinging ’60s.”

In 1996, Poitier reprised his role in the TV movie, To Sir, With Love II, and in 1996 Poitier starred in To Sir with Love II, a television sequel to the original film, in which Thackeray retires from his London post only to take one up at an inner-city school in Chicago.

In 2007, there was a dramatization for BBC Radio 4. A stage production of the original story toured in 2013.

To date, no Caribbean author has replicated this feat of having one of their works turned into a successful Hollywood movie.

Braithwaite also wrote the books “Paid Servant” (based on his time and experiences as a social worker in London), “Honorary White” (a report of his visit in the 1970’s to apartheid South Africa), “A Kind of Homecoming”, “House of Straws”, and the autobiographical “Reluctant Neighbours”.

Braithwaite’s numerous writings have primarily dealt with the difficulties of being an educated black man, a black social worker, a black teacher, and simply a human being in inhumane circumstances.

Disillusioned with England, Braithwaite left for Paris, working as a Human Rights Officer for the World Veterans Federation (1960-63) and then as an education consultant to UNESCO (1963-66).

On achieving independence in 1968, Linden Forbes Burnham, Prime Minister of Guyana appointed Braithwaite as the country’s permanent representative to the United Nations (1966-68), and then ambassador to Venezuela (1968-70).

The two countries had historically had a fractious relationship, with Venezuela claiming much of Guyana’s territory. Braithwaite managed to put affairs on a more even keel and helped to negotiate a temporary settlement between the neighbours, which still holds.

In 1973 the South African government lifted a ban on his books. The visa status he was given for a visit there – more privileged than for indigenous black people, but less privileged than for white people – provided the title for his account of the experience, “Honorary White” (1976).

E.R marked his centenary in 2012 by returning to Guyana to receive the country’s highest honour, the Cacique’s Crown.

The accomplishments of recognizing rejection due to the color of his skin, to simply being called “Sir” by all those around him, made Braithwaite legendary.

Go on to your well-deserved rest “Sir”, with love, you have not only done Guyana proud but the entire world.