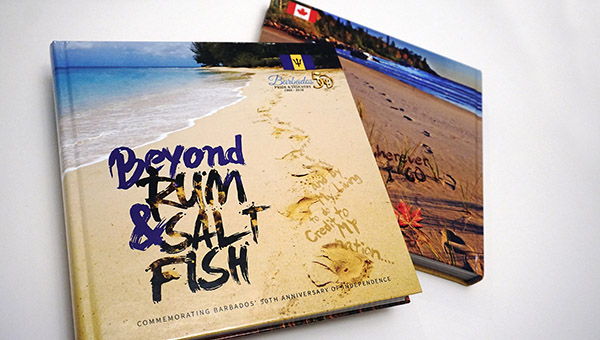 The front and back covers of "Beyond Rum & Salt Fish". The beautiful souvenir book was designed by twin sisters, Lisa and Leslie Jones. Photo contributed.

PICKERING, Ontario March 16, 2017 — Amid an ambiance of national pride and conviviality, about 100 of the Who’s Who of Barbados’ Canadian Diaspora, and other guests, bore witness to the official Canadian launch of ‘Beyond Rum & Salt Fish’, a glitzy, high quality, 293-page tome, that commemorates the 50th Anniversary of Barbados Independence.

Held at its publisher’s luxurious, 3-car-garage home — one of a quiet enclave of expansive executive residences, backing unto a serenity-infusing landscape of naked, giant trees that embank Petticoat Creek — the aesthetically beautiful and editorially comprehensive volume rivals the venue’s rich and luxurious surroundings.

Dr. Grantley Morris, a Barbados-born philanthropist and the Publisher and Chief Executive of the collaborative volume, intimated, during his speech at the launch, that the concept of the book was hatched in the Fall of 2015, when a small group of Barbadian-Canadians “met at the home of Mark and Wendy Beckles to discuss what could be done to commemorate the significant milestone of Barbados’ 50th. year of Independence.”

In the preface of the book, Morris and Dr. Barbara Trieloff-Deane, the Editorial Team Lead, says the initial meeting was subsequently followed by a strategy session at Morris and his wife’s (Patricia Sammy) home, where three items emerged: “the appearance of the cricket legends of Barbados at the Independence Gala in Toronto on November 19, 2016; the need to prepare a book, commemorating Barbados’ 50th anniversary of Independence; and, in particular, the importance of recognising the contributions made by Barbadians to the advancement of Canada”.

In her welcome address, Trieloff-Deane mentioned that the commemorative book “forms part of the efforts to recognize contributions of Barbadians in Canada at important milestones in the history of both nations: Canada’s 150th anniversary this year and Barbados’ 50th anniversary as an independent nation in 2016.” 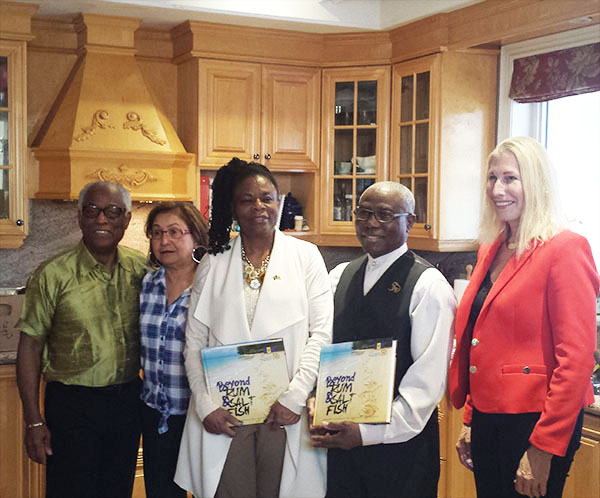 “The historic relationship between Canada and Barbados is symbolically reflected in the title, ‘Beyond Rum and Saltfish’. Ships brought saltfish from Canada and took back ‘liquid gold’ – rum bullion – good old Bajan rum,” she added.

‘Beyond Rum & Saltfish’ comprises two sections: the first tells the story of Barbados’ genesis as a nation; and the second highlights a number of Barbadian-Canadians, showcasing their contribution to their adopted home. 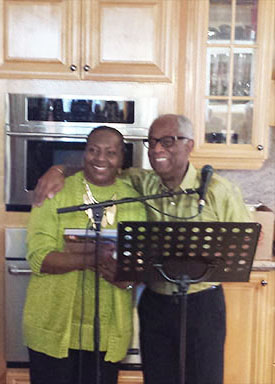 The book also contains a foreword by, and a message to the Barbados Diaspora in Canada from, Barbados’ Prime Minister, Freundel J. Stuart; a message on the occasion of the souvenir book from the country’s Canadian High Commissioner, Yvonne V. Walkes; and a message from Haynesley Benn, the Consul General for Barbados at Toronto.

Both Walkes and Benn attended and spoke at the official launch. Also attending the event was Dr. Pamela Appelt, former Citizenship Judge; Kathy Grant, first Vice-president of the Ontario Black History Society (OBHS); Kay McConney, former Barbados Consulate General at Toronto; a number of the contributing writers; and many of the distinguished, accomplished Barbadian-Canadians showcased in the book.

The book’s introduction poignantly sets the tone for the rest of the volume: “‘Barbados punches above its weight.’ This iconic statement, made by the former Secretary-General of the United Nations, Kofi Annan, has resonated for decades and can be seen as articulating the level of impact made by Barbadians in Canada, over the years, while also looking forward to the future promise of our leaders of tomorrow.”

Comprehensive, expertly-written articles populate the first section of the souvenir book, including: “Brief Historical Review of Barbados”, by the late Robert E. Morris; “The Rt. Excellent Errol Walton Barrow, Founder Of Barbados As A Nation”, by Dr. Jean Holder; “Thanks And Praise To Our National Heroes”, by Sir George A. O. Allen, Chancellor, University of the West Indies; Prime Ministers Of Barbados And Their Respective Roles In Shaping Barbados As A Nation”, by Wendell Callender; “Barbados — One Of The Oldest Parliaments In The World (1639 to present)”, by The Hon. Robert Morris; “The Future Of The Barbados Economy”, by Dr. DeLisle Worrell; “The Barbados Rum Industry”, by Richard Seale; and “Cricket A Prominent Sport In Barbados”, by Dr. Keith A. P. Sandiford.

Contained in the second section are profiles of distinguished, illustrious Barbadian-Canadian achievers and their significant contribution to Canada, in areas such as: Academia and Education; Business; Community Service; Financial Services; Health Care and Hospital Administration; Law and Politics; Media and the Arts; Medical Fields and Research; Public and Social Services; Religion; Sports.

It also includes “Leaders of Tomorrow”; and “Friends of Barbados” in a sub-section. 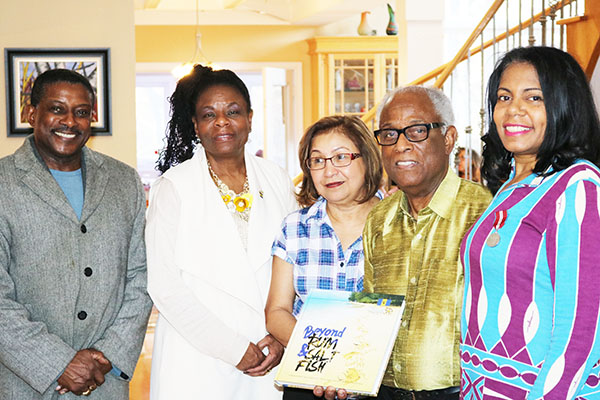 Kathy Grant (right), President of Legacy Voices and First Vice-president of the Ontario Black History Society (OBHS), who was one of the accomplished Barbadian Canadians profiled in the souvenir book, poses for a photo with, from left to right: Michael Van Cooten, Publisher and Editor of Pride News Magazine and Founder and CEO of the African Canadian Achievement Awards of Excellence (ACAA); Yvonne Walkes, Barbados’ High Commissioner to Canada; Patricia Sammy and her husband, Dr. Grant Morris. Photo contributed.

Towards the conclusion of her welcome speech, Trieloff-Deane took liberty, saying that Barbados’ “Founder of the nation” would be proud of the individuals profiled: “From time to time, I have reflected on the famous address of the Right Hon. Errol Walton Barrow in May 1986, as he challenged his audience to reflect on the mirror image of themselves and the implications of that image.

“I feel confident that he would be proud to read these stories of individuals whose mirror image is truly that of global citizens, ‘writing their names on history’s page’, ‘doing credit to their nation wherever they go’.”

‘Beyond Rum & Salt Fish’ — which its publisher says “..is designed as a hard-cover, coffee table book, which should be in all Barbadian homes in Canada…” — retails for $70.00, plus HST, with the proceeds going to charity.