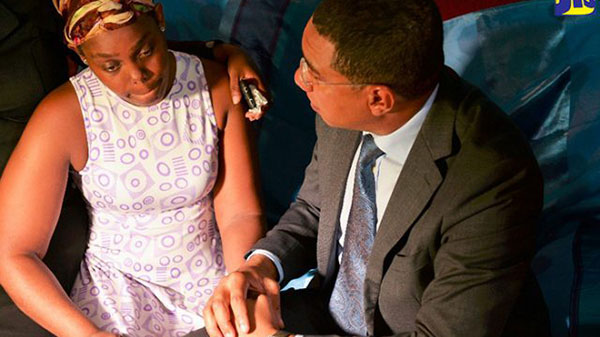 KINGSTON, Jamaica, August 9, 2017 (CMC) – Prime Minister, Andrew Holness, has described as “one of the vilest attacks on our young women”, the murder of 17-year-old school girl, Micholle Moltan, reportedly, because she refused to give into sexual demands by some men in her community.

The secondary school student was shot in the head at her home in the community of Arnett Gardens, on Sunday night, as she slept. Her 12-year-old sister was also shot and injured in the incident.

“There can be no divide on crime in the country. We all have to come together and draw a line in the sand and, those with the criminals, should recognize the criminals are no respecter of lives. They will turn on you one day,” Holness said, as he visited Micholle’s mother, yesterday, to personally offer condolences and assistance.

The Ministry of Labour and Social Security and professional counselling services have been tasked to provide assistance.

“I thought I would come here and say your daughter’s death cannot be in vain. We have to put a stop to it, to prevent other innocent girls and boys from being killed. This could be anybody’s child. This is a great distress, but we are resolved to deal with it and to support you in this time,” said Prime Minister Holness.

Holness has called on the police to spare no effort in investigating the crime, and also urged members of the community to provide information to the police, so as to bring the perpetrators to justice.

“The wider Jamaica is very distressed and very angry and I want to reassure the country that the government is moving, very quickly, to have the Zones of Special Operations implemented, and to ensure we bring safety, security and peace and prosperity to the Jamaican people.”

Earlier, National Security Minister, Robert Montague, and Opposition leader, Dr. Peter Phillips, condemned the murder of the Meadowbrook High School student, with Montague saying the incident was a harsh reminder of the realities “we face as a nation”.

“Even while we have much to celebrate, some have no thought for the future, preferring to hurt our youth and destroy their hopes and dreams,” he said, adding that the Jamaica Constabulary Force (JCF) has given the assurance that “no effort will be spared to bring to justice the criminals who carried out this dastardly act” and urged Jamaicans to unite against crime”.

Phillips has called on the Arnett Gardens community to help the police in their investigations.

“This brutal killing of the 17-year-old and the shooting of her younger sister, signal a new low to which our society has plunged, in relation to crime and violence,” Phillips said in a statement.

““I offer condolences to the family, community, schoolmates and teachers, and pray for a speedy recovery for her sister, who suffered injury in the attack,” he added.