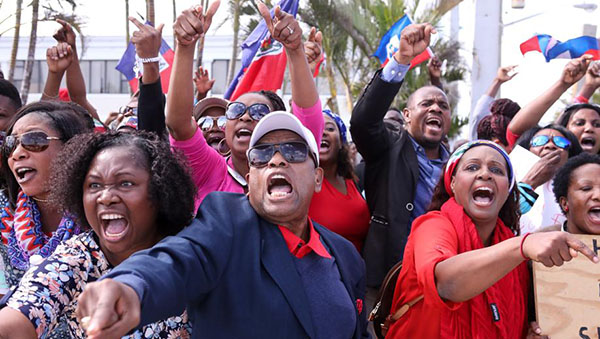 The group of about 400 protesters, including doctors and pastors, students and attorneys, almost all of Haitian descent, gathered in the spirit of a US federal holiday, recognizing the nation’s most recognized activist, the Rev. Dr. Martin Luther King Jr. and on a day on which the President, himself, was likely to see them as he zipped by in his motorcade.

The Palm Beach Post reported that those who stood at the southwest corner of Southern Boulevard and Flagler Drive said they were driven to protest by President Trump’s reported disparaging remarks, last week, including “Why do we want all these people from ‘shithole countries’ coming here?” and Trump’s assertion that America should instead, bring in more people from countries such as Norway, which is overwhelmingly White.

“We know the country (Haiti) is not a ‘shithole’ country,” said Charlemagne Metayer, a Lake Park zoning board member, who came to the US in 1985, became a citizen and is father to four.

“We help America to fight. Some of us work two or three jobs to make a living. We are hard-working people. We deserve an apology from the President,” Metayer said.

Byrnes N. Guillaume, an attorney and one of the protest organizers, said the expectations don’t end with an apology.

“We want an immigration policy to be unbiased — one that does not favor people from Norway over Haiti. And we want people who are of like minds to vote,” Guillaume said.

The protesters carried signs declaring Haiti is not a “shithole” and “Let’s make America Great Again, NOT all white again.”

The crowd was swathed in bright reds and blues of the Haitian national flag.

At times, protesters broke out in song from that not too distant land. In between, they called and answered: “What do we want? Apology,” the Post added.

The protest was a first for 27-year-old Sheena Marceline, a nursing student from West Palm Beach.

“I’m Haitian-born, but I’m an American citizen,” said the young woman, who arrived in Florida when she was 7. Her father, she said, fled after his politically-active brother was assassinated in the 1990s.

“We are good people,” Marceline added. “We had to leave the country because of our political beliefs. We are not bad people. I never really cared for Trump or Clinton. But he’s (Trump) just been very disrespectful.”