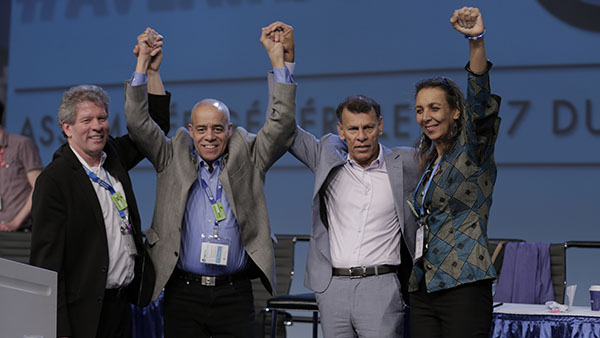 TORONTO, Ontario May 15, 2017 (PRIDE) — In its 61-year history, this is the first time that three out of the top four officers of the Canadian Labour Congress (CLC), which represents 3.3 million Canadian workers, are people of colour.

Stalwarts of the labour movement, some retired, are applauding this significant and major step.

During its 28th Constitutional Convention in Toronto, the CLC’s membership re-elected the incumbent president, Guyana-born Hassan Yussuff, who was not contested.

Marie Clarke Walker, who served as executive vice-president for 15 years, was elected secretary-treasurer, a position that was held by Barbara Byers who is retiring.

Clarke Walker has created another first for the labour movement by becoming the first racialized woman to ascend to its secretary-treasurer position.

In 2002, she was the first black woman to be elected as an executive vice-president as well as the youngest-ever elected CLC officer.

Clarke Walker’s mother is a retired trade union activist and feminist originally from Jamaica; her father is a lawyer from Barbados who has represented workers all his life.

“I’m humbled and honoured at the amount of support I received. After being executive vice-president for 15 years, one would think that I would have learned something that qualifies me to be a secretary-treasurer. What I think surprised me, was the amount of people that kept talking about my qualifications,” says Clarke Walker, in an exclusive interview with Pride News Magazine — hours after the election in a room at the InterContinental Toronto Centre, where members of her campaign team; her mother, Beverley Johnson; and husband, Shaka Thomas, chief steward, Canadian Union of Postal Workers (CUPW) Toronto Local, gathered to celebrate her achievement.

“Every secretary-treasurer from Nancy Riche, Hassan Yussuff, Barb Byers, all were executive vice-presidents and moved up to secretary-treasurer. Why should I be any different?” she asked. To her, it seemed to be a natural progression.

Clarke Walker said she had been very responsible, in terms of her expenses, recognizing that it is the members’ money, whether it comes from their affiliate or not.

“That came out of a member’s pocket and so I’m always respectful of that. I know how hard it is for me when I cash my pay cheque to be able to pay my mortgage, when I had younger children to make sure that they were fed and clothed, and scrap together every last penny. I recognize the majority of our members are in that boat,” she explained. 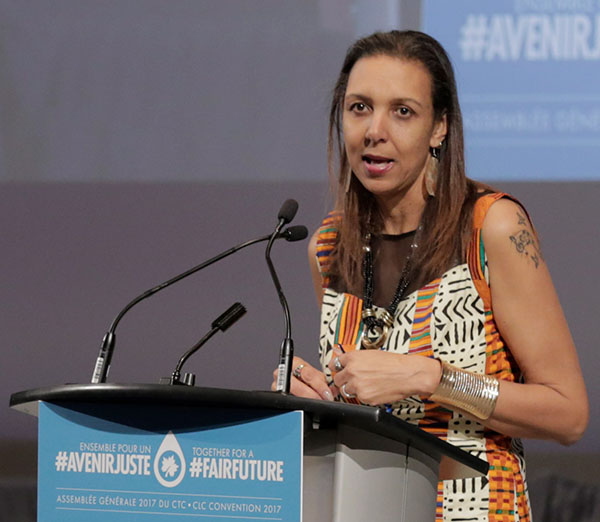 She said she is proud to be a part of this team, and if she could change something, it would have been to have the gender parity there, which is missing.

“They are still three, I think, amazing people to work with that are extremely qualified, extremely good at what they do, and for me, I’m just looking forward to the next three years,” Walker said.

Johnson is ecstatic about her daughter’s achievement. “I am very proud of the work that she has done. I think she has earned the position and I am confident that she will do an amazing job.”

She said the three officers are diverse in the experience that they bring.

On the convention floor while thanking her supporters, Clarke Walker dedicated her victory to Armstrong, and the late Fred Upshaw, another legendary trade unionist, who died at the age of 81 on March 1 of this year. She revealed that they would always encourage her work in the labour movement.

Rousseau says his victory is still sinking in and he would use the weekend to get some rest.

He actually attended two conventions, within days of each other.

Commenting on the historic significance, Rousseau said many in the workforce are represented by workers of colour.

“Immigration to our country is mainly by workers of colour. If we’re going to maintain the population of Canada, we know that it’s not been done demographically because Canadians aren’t having the number of babies that we should. So the demographic growth in Canada, a lot of it is through immigration, and immigration is a question of colour,” Rousseau noted.

He said one of the main themes of the convention was, “We need to organize and we need to grow the labour movement.

“A lot of that growth is going to come amongst the workers of colour out there, who are not organized currently, who do not have the benefits of collective agreements, who are not being paid the salaries that are necessary to provide for family, for kids, for education, etc.”

The new CLC executive vice-president said, many people are going to say that it is a good thing that the leadership of the CLC is going to be particularly sensitized to the importance of the way labour presents itself to workers of colour.

“And, if workers of colour are seeing themselves in leadership positions in the union movement, and this is a beginning, because the labour movement increasingly will have to reflect the workers that it serves, just like government. In that case, I think this is a good thing and I think we’re on the right track.”

His parents are from Haiti and Rousseau describes them as progressive individuals, and his mother as someone who was a “very headstrong feminist” at the age of 16 in Jacmel.

“Both of my parents raised us with extremely progressive values, so they would certainly be extremely proud if they were alive today, to know what has happened. My parents were very, very happy when I was working at the CLC. They’ve always been very pro-trade unionist and this is something that has followed us – my brothers and sisters as well.”

Two of his siblings are in the United States, and two are here in Canada. “We are a trade union family,” he said.

Rousseau’s first experience in the labour movement was when he started as a filing and stockroom clerk in the mailroom of the Canadian Labour Congress at the age of 18.

Soon after, he was elected shop steward for the Office and Professional Employees International Union Local 225 (now COPE).

He subsequently became a regional vice president with the Union of National Employees, and an employee of Statistics Canada.

His involvement in the GLBT, peace and social activist movements has been an integral part of his engagement and commitment for social justice.

Meanwhile, June Veecock, former director of human rights at the Ontario Federation of Labour (OFL) and a member of the Coalition of Black Trade Unionists (CBTU), says it’s great and long overdue.

“For well over two decades we, CBTU founding members, have been challenging the labour movement over equity and representation to reflect the workers they serve – in all areas of union activity: staffing, boards, agencies and commission, and of course, leadership positions,” she declared.

She recalled, as if it were yesterday, that Dory Smith, a CBTU member, first ran from the floor at the CLC’s 1992 convention and got over 1,200 votes.

“It was this move that led the CLC to establish two seats for racialized workers,” says Veecock, who is also an ACAA Lifetime Achievement recipient.

Herman Stewart, a former vice-president of the OFL executive board, says this is a far cry from when he was involved in the CLC, back in the 1980s.

“I was one of the guys that was pushing for minority rights and to see that now we have three officers there, that’s great. Marie is an experienced trade unionist and she has been around for a while and I think she will do a good job, and I’m quite pleased and happy for her.”

Stewart, also a former president of the Jamaican Canadian Association (JCA), said what the CLC has now, is more reflective of the workforce of Canada.

“When I was involved in it, it was all lily white and the workforce wasn’t lily white at the time. We were always left behind, so I’m quite pleased,” said Stewart who, in 1987, became the first person of colour to be elected to serve on any federation of labour executive board in Canada.

Stewart and Veecock were among the leaders of the successful campaigns to have minority representation on the CLC and the OFL Executive Boards in the 80s. They are also founding members of the Ontario chapter of the CBTU. 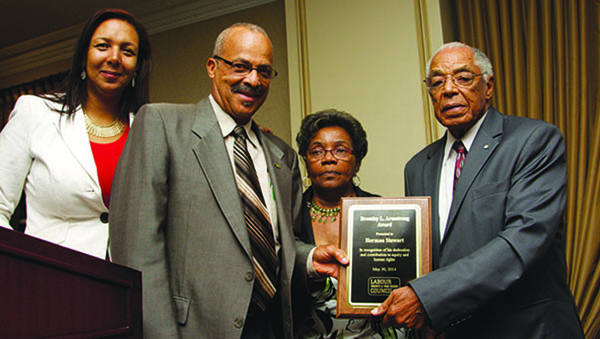 Marie Clarke Walker (left) seen with, from left to right, Herman Stewart, June Veecock and Bromley Armstrong. The foursome was photographed, in May 2014, at an event, where Stewart had received the Bromley L. Armstrong award that was initiated by the Toronto & York Region Labour Council. Clarke Walker was the emcee at the event. Photo contributed.

“When you think of the fact that racialized workers make 80% of what a non-racialized worker makes, then it’s crucial that the face of the labour movement reflects our priority,” he reasoned.

Alluding to the election of Donald Trump in the US and the racist incidents shortly afterwards, and the massacre at a mosque in Quebec, Dias said, in his opinion, “we are living in a time where racists feel almost as if they have a champion in Trump.”

“So a lot of the hatred, I will argue, that has been suppressed, is no longer suppressed, so people are feeling a lot more confident today about being openly racist. So, for the labour movement, in Canada, to do the opposite, to hire, in essence, three racialized workers, including one openly gay worker of colour, I think is an incredible move towards expressing our progressive values,” he noted.

He said this is going against some of the real challenges progressives are facing across the world.

John O’Dell, national representative for Unifor and a member of the CBTU, thinks that this change is reflective of the workers and face of Canada.

“Far too long aboriginal and workers of colour were underrepresented in the labour movement. I think that this team brings a true representation of the one percent, because they have been there, at some point and time in their lives,” he commented.

O’Dell said he has worked alongside Yussuff and Clarke Walker, and met Rousseau — “who exudes passion for the work he does” — at the convention.

“I have committed to giving my full support to the direction they will take the labour movement. I can assure you that, in my opinion, these three people, along with the rest of the executive, are not there to line their pockets and collect a pay cheque, they are the roll-up-your-sleeves types,” O’Dell declared.

The officers of the Canadian Labour Congress will serve a three-year term.