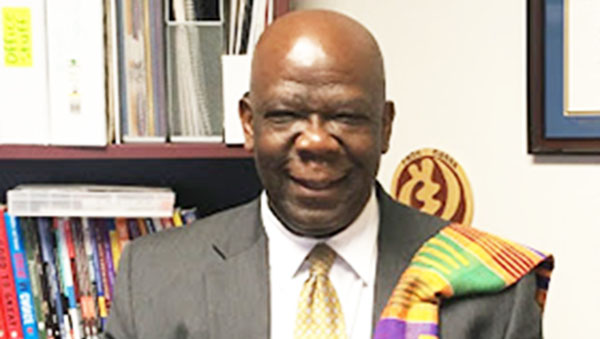 Luther Brown, Principal of the Africentric Alternative School, in his office at the school which is located in the Sheppard Avenue, West and Keele Street area of Toronto, Ontario.

TORONTO, Ontario June 27, 2017 — Luther Brown, principal of the Africentric Alternative School (AAS) in Toronto, has been in that role since February 1, and he describes it as being a good experience.

“The parents are welcoming and supportive, staff are enthusiastic and showing a sort of energy that I feel is a good energy to lead us in the direction we want to go. The students are bright; we don’t seem to know that. As a large group, to find so many students who are bright is not a regular occurrence,” Brown says.

There are 110 kindergarten to grade 8 students attending the school, which opened in September 2009 and is located in the Sheppard Avenue, West, and Keele Street area.

Brown says there is a wide array of students, in terms of abilities and how they give back; but he thinks that, in relation to the places he has worked, “my gut estimate of kids who are really good thinkers, we’ve got a lot of them in the building.”

This is part of the reason he wants the staff to be clear about helping them to become leaders, so that all of the students who graduate from there will create change by leading.

When he was appointed principal, Curtis Ennis, Toronto District School Board (TDSB) superintendent for the school, noted Brown’s strong sense of community and the fact that many grassroots organizations know him and his work.

He also described the new principal as a strong listener and a supporter of young people. 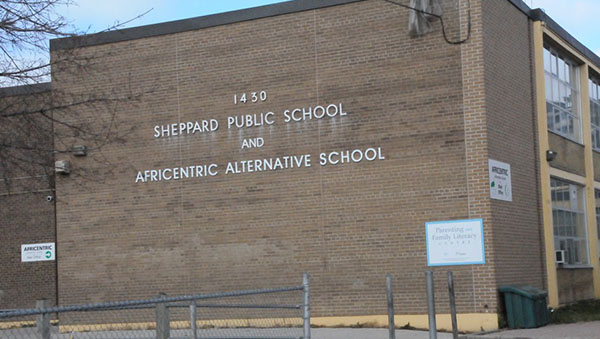 Brown said this connectedness to the community has been beneficial for him.

“It’s very helpful, I think, because when people already have an idea of who you are and have a positive connection with that idea, that translates into let’s be supportive even if we’re skeptical,” he surmised.

People have told him, on many occasions, that he is “the right man for the job.”

His first teaching job was at Brookview Middle School in the Jane Street and Driftwood Avenue area, where he did so for a few years before becoming the vice principal.

That was where his administrative career was launched, which took him “in a circuitous way back to Jane & Finch.”

“It is a good feeling to be connected again in this community the way I am,” says Brown, who lived in that community for “generations”, where he knew people like media personality, Dwight Drummond, and singer, Julie Black, who have also excelled in their work.

In the “Africentric Alternative School Research Project Year 3 (2013-2014),” Dr. Carl James and others recommend that: “A clearly articulated vision of the school, although an ongoing process, is necessary for the school and community to work together, without public misconceptions detracting from the school’s success.”

Brown says the morale in the school is good, and that the idea that the research generates is helpful, particularly to him, as someone who is coming in new.
“It gives me the opportunity to help to fashion what the vision can become, because it already had a vision. The vision might not have been articulated in ways that the people wanted to feel it, and as well, it was an early evolving vision, and so people would have all kinds of opinions about what it should be. I take my cues from the birth of the school. It was a fight to have black students, en masse, achieve at high levels. It was a fight to have a school where students feel connected, feel cared for, feel loved, and feel that they’re wanted,” Brown noted, passionately.

He says if one listens to most of the conversations that were public, those were the contentions that parents brought forward, not just to the TDSB, but to Canada, in general.

They wanted their children to be treated in a certain way, so according to Brown, “This school has to have a vision that seeks to meet those desires.”

That means high academic expectations, a good social environment, “we have to be connected with our culture, and we have to be able to understand that the African culture is not a uni-culture. It’s kind of like African music, it’s polyrhythmic in many different ways.”

Brown says they have to look at a broader spectrum and then have to focus.

“What we’ve been doing as a staff is, we’re looking to say, okay, we’re going to focus on academic excellence, on students’ wellbeing, and on building our community relations,” he related.

The other aspect of this vision is to ensure that, internally, there is clarity about it, Brown added.

As a result, partnering with Professor James, they had a staff retreat at York University on May 23, while back at the school, students were engaged with an arts education program, run by Just BGRAPHIC and supply teachers.

The purpose of the retreat was to re-examine the vision, determine which aspects to focus on, and to look at what their teaching practice will be.

According to Brown, “We know that there are some practices that work for students. If you’re going to teach me, tell me what you want me to learn, tell me how you’re going to know if I have learned it, give me feedback to help me get it, and things like those are critical in our day- to-day practice. Those are the things we were looking at.” 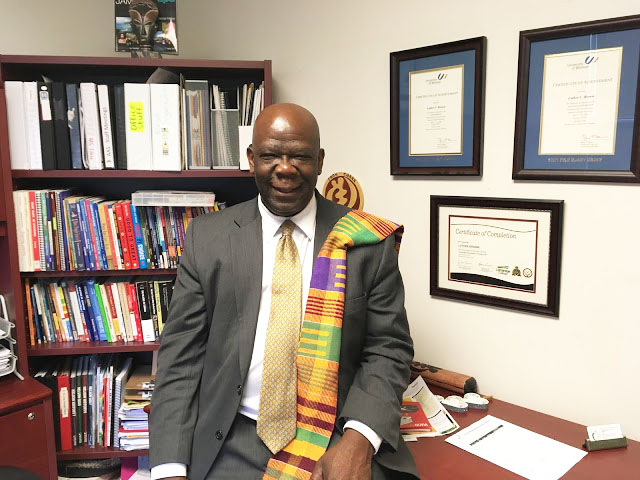 In welcoming the announcement that Brown was the new principal, Yolisa Dalamba, an active parent and member of the school council, said she hoped he would “work with us to restore academic excellence, healing and cultural pride in our school that makes up for all the turbulence, (which) especially our students, have endured since the school doors opened.”

She noted that they have very high expectations of the school’s new, experienced principal “to work in partnership with parents and other stakeholders to uphold and realize Africentricity in our philosophy, pedagogy, and political and cultural practice, infused with the pan-African and anti-colonial legacies of resistance left by our ancestors.

“Some of those include anti-oppression, decolonization, resisting white supremacist values and breaking down systemic barriers.”

Brown said if the AAS, as an Africentric school, cannot interrogate white supremacy without being fearful then they have a problem.

“But we also have to define that white supremacy isn’t just the notion of the KKK, etc. It’s an understanding of the power relationships that occur in society, where one race is highly dominant in just about every area. It’s not a hard research activity to find out. One could look at television and see how people are represented, see who delivers what, see who decides on images and who decides on knowledge that get shared and so on,” he said.

It also means considering the person of African ancestry who is female and has a different experience from the African Canadian who is male.

Brown says this brings into perspective the intersectionality of different things “coming together and every piece has its own impact.”

“We have to look at it from an Africentric standpoint, where we interrogate all of those things.”

The retreat examined texts, contexts, for example, visits to exhibitions and galleries to consider how the knowledge is presented, and to determine if erasure is happening to someone, using a social justice lens.

“The reality is, there are not going to be many texts or many exhibits that, in our current context, will be fully inclusive. And therefore we have to create that inclusion – which is a legacy of white supremacy, because it means I have to work harder to get to what is considered norm. Norm is a constructed thing,” Brown opined.

“I think as a school we have to be clear about our Africentric lens and be clear that we use it on a regular basis,” he continued.

Brown believes that teachers ought be modeling the way things are supposed to be, and, as principal, if he can’t inspire people to see and engage the vision “then we’re kind of in trouble.”

Brown says fundraising events, like the school’s annual gala, are helpful because they allow the school to do things that it typically couldn’t do.

“Partners for fundraising – we look for that and we’re encouraging and asking people to do that. So trips are one example of what we could do,” he said, noting that they are seeing a lot of literature about coding, but it is expensive, so partnerships are necessary.

Just BGRAPHIC recently came in and did an afterschool computer design arts program for 15 kids.

“TDSB has a partnership protocol so people can participate in that,” he says.

In terms of how the students are doing, academically, Brown said he is not happy with their results as measured by the Education Quality and Accountability Office (EQAO), however that’s going to change.

“A change gonna come, because once we become focused on the things that are good for students academically, and once we can help teachers to become comfortable in their space and to think about teaching as their first call, rather than conflictuous situations. My job is to sort of shield them so they can do what they have to do and to interpret what the outside is sending in to say, okay, this is what I think is coming from outside and let us find a way to respond to it appropriately.”

He thinks people are moving in the right direction right now. “We’re working to develop our long range plans that will allow everybody, prior to September, to say this is what I’m going to be teaching and parents will know.”

Brown has not been able yet to outreach to community organizations because he “is trying to learn the building and try to understand what our needs are and be focused.”

He describes the AAS as a “warm energetic place”.

“One of the things I love about this place, we know who our parents are. They are the rowdy ones who went to the board and said give us a school. They’re the ones who stood back and decided there’s a path to a school and we’re going to pursue that. And they’re the ones out here who were agitating — so all of that mix help to make this school happen,” Brown observed.

The principal said it is the children of these parents who are in the school and they come from places such as Oshawa, Mississauga, Brampton, they come from all over.

“These kids have opinions and they are not ashamed or afraid to share their opinions with you — we don’t want to silence those voices,” he emphasized.