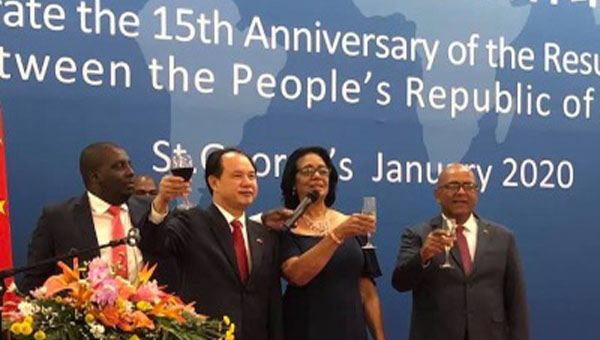 ST. GEORGE’S, Grenada, Thursday, January 16, 2020 (CMC) – Fifteen years after re-establishing diplomatic relations with the People’s Republic of China, Grenada, on Tuesday night, re-affirmed its commitment to adhere to the One-China policy, while also expressing satisfaction with the level of the relationship between the two countries.

“Mr Ambassador, tonight we formally place, on record, our satisfaction and pleasure with the deep and meaningful relations between St. George’s and Beijing, as well as an expression of our renewed commitment to continue our co-operation at the international level for the mutual benefit of our people,” Foreign Affairs Minister, Peter David, said during a reception to mark the 15th anniversary.

David said that when Grenada re-established diplomatic relations on January 20, 2005, it joined the vast majority of countries, around the world, that have embraced the policy, and, at the same time, made a conscious effort to advance a foreign policy, aimed at improving the socio-economic conditions of its people.

“Fifteen years later, it can be said that the relations between our two countries have progressed to the extent that the seeds of our collective efforts have already begun to blossom and, in many instances, to bear fruits,” said David, outlining some of the “tangible and intangible benefits” gained through mutual cooperation.

Referring to China’s Belt and Road Initiative, David said that Grenada believes that the initiative — a global development strategy, adopted by Beijing, involving infrastructure development — demonstrates the concept of a community with a shared future, and showcases the characteristics of jointly sharing rights and responsibilities.

China’s Ambassador, Dr Zhao Yongchen, said that during the past 15 years, there has been active and colourful cultural exchanges between the two countries.

“Since the official establishment of the Confucius Classroom at T. A. Marryshow Community College in October 2015, 1855, Grenadians have taken Chinese courses there. By the end of 2019, more than 2,100 Grenadians have participated in training and advanced education in China,” he told the ceremony.

The diplomat noted that the resumption of diplomatic relations between the two countries in 2005, opened a new chapter of bilateral exchanges.

“Though thousands of miles apart, our two peoples share the same dream of development,” he said, adding “both sides have always respected and taken care of each other’s core interests”.

“China stands for the equality of all countries, large or small. China respects Grenada’s sovereignty and independence, never interferes in Grenada’s internal affairs and helps Grenada build up its independent development,” said the Ambassador, who expressed appreciation that China highly appreciates Grenada’s adherence to the One-China Principle.

“The two sides have kept sound communications and cooperation on both international and regional issues, supported each other on issues concerning each other’s core interests and major concerns, and played an important role in safeguarding the interests of developing countries, maintaining regional and world peace and security, as well as maintaining the international order,” he said.