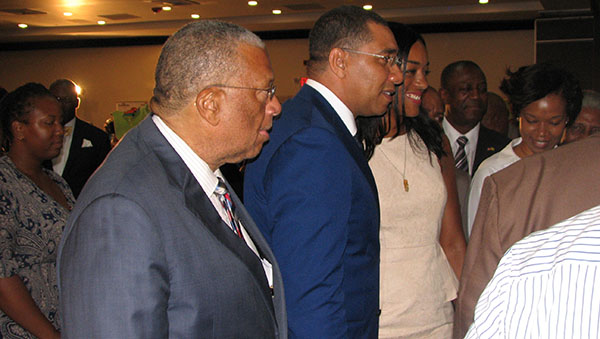 Jamaica Prime Minister, Andrew Holness (fourth from left), and Opposition Leader, Dr. Peter Phillips (third from left) meet and mingle with members of the audience at the Opening Ceremony of the Jamaica 55 Diaspora Conference, on Sunday, July 23. Photo by Michael Van Cooten.

KINGSTON, Jamaica July 31, 2017 (PRIDE) — In the world of contemporary politics, where opposing political parties embrace intense partisanship, and where consensus is rare and uncommon, Jamaica’s Prime Minister and Opposition Leader recently snubbed tradition, and agreed that the country’s Diaspora is important and essential to its economic development.

Last week Sunday, at the Official Opening Ceremony of the just-concluded Jamaica 55 Diaspora Conference, held inside the spacious, elegant and filled-to-capacity Grand Jamaican Ballroom, at the Jamaica Pegasus Hotel, Prime Minister Andrew Holness told members of the Diaspora, among the over 1000 in attendance, “I take this opportunity to reaffirm that the government is cognizant of the fact that you, our Diaspora members, are amongst our best assets, sharing your skills, creativity and boundless ingenuity, and we must use this to our nation’s benefit.

“Further, this administration pledges to continue facilitating your involvement in every facet of the country’s socio-economic development.”

Dr. Peter Phillips, Leader of the Opposition, in his message to the Conference, concurred with the Prime Minister’s sentiment about the importance of the Diaspora: “For a country like ours, in a region of small states, the role of the Jamaican Diaspora becomes all the more critical, if Jamaica is to fulfill its mission of delivering the benefits of modern life to all Jamaicans.”

“I would encourage this conference to focus on the establishment of a framework for the closest collaboration with, and access to, the expertise of Jamaican professionals and entrepreneurs in the Diaspora,” he added, noting, “For given the need to radically modernise the education and training of the Jamaican labour force, Jamaica needs to access the capacity of the professional and entrepreneurial groups within the Diaspora, if we are to compete successfully in today’s global marketplace.”

With its theme “Partnering for Growth”, the 2017 Jamaica 55 Diaspora Conference — a forerunner to the island-state’s celebration of its 55th. Independence Anniversary next month — was convened by the Ministry of Foreign Affairs and Foreign Trade, in collaboration with public and private sector organisations. 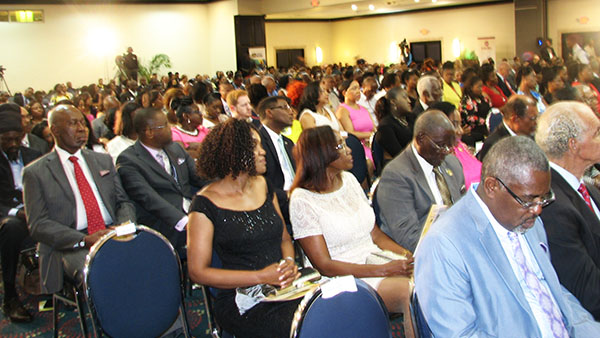 A cross-section of the huge audience pay rapt attention to the messages relayed by the speakers, including the Emcee for the evening, Earl Jarrett, the Chair of the Conference. Photo by Michael Van Cooten.

Under the stewardship of the Foreign Affairs Minister, Senator Kamina Johnson Smith, the four-day Conference was described by its organisers in the program magazine, as being “firmly positioned to encourage a new era of growth through the strategic engagement of our Diaspora. Structured transnational engagement with Jamaicans and persons of Jamaican descent has long been recognised as an important avenue, through which Jamaica can motivate Diaspora contribution to, and greater involvement in, the country’s affairs, towards discernible and quantifiable economic and social growth.”

The Conference, which attracted delegates from the UK, US, Canada, Japan, Nigeria, the United Arab Emirates, the Cayman Islands and other parts of the globe — and which, according to an official with the organiser, saw approximately 1200 people registered, including delegates, sponsors and exhibitors — took the form of an expansive vendors’ marketplace and four days, chocked full of plenary sessions that included presentations by expert panelists and interactive discussions, in the form of questions from the audience — answered by the panel members.

Topics dealt with in the plenary sessions included, “Caring, Building And Protecting Our Human Capital; Innovative Strategies For Inclusive Economic Growth And Job Creation; Investments and Expertise In Agriculture In Jamaica; Investments in Medical Marijuana and Nutraceuticals; Investments For Jamaica’s Cultural And Creative Industries; and Driving Economic Growth Through Tourism Innovation: A Role For The Diaspora?

At the Opening Ceremony, in her message, Foreign Affairs Minister Johnson Smith explained that the Conference was centered on Jamaica’s economic growth agenda, with emphasis on three main areas: building, caring for and protecting our human capital, our greatest asset; analysing and understanding the drivers of economic growth — what propels and what retards; and promoting sustainable socio-economic development — an imperative for our National Vision 2030. 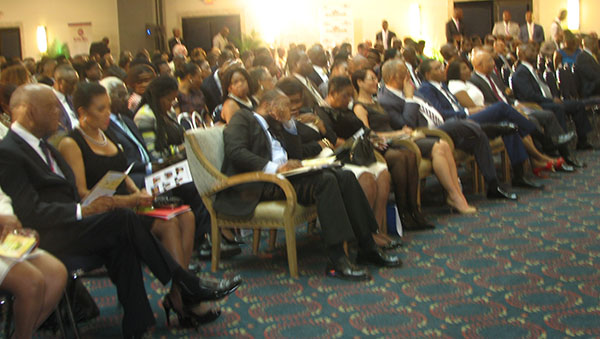 “The Jamaica 55 Diaspora Conference presents a platform for us to move strategically into a new era of Diaspora-homeland partnership. Let us seize this opportunity to re-energise, and re-engineer new partnerships for growth, as captured in this year’s theme,” she added.

Live-streamed globally on the Internet, many around the world and in attendance at the Opening Ceremony, heard the Jamaican Prime Minister and the Opposition Leader, seated in the front row, beside each other, further express similar sentiments about the country’s Diaspora.

“The convening of these Diaspora conferences is now a fixed part of the national agenda. It recognises the simple fact that the Diaspora is now an essential and integral part of the Jamaican family. In today’s globalised world, in which international borders are disappearing, Jamaica’s future and that of the Diaspora are inextricably inter-twined,” noted Phillips, who is also leader of the People’s National Party (PNP).

“Traditionally, we have concentrated mainly on the issue of remittances — in assessing the benefits flowing from the Diaspora. We need now, however, to recognise the role of the Diaspora as a source of investments into Jamaica and a vital market for Jamaica’s products.”

And in his Keynote Address, Prime Minister Holness, leader of the Jamaica Labour Party, in his deep, resonant voice, echoed Phillips’ recognition of the Diaspora’s significance: “I have personal knowledge, from my own travels to many Diaspora communities, that your heart strings are firmly attached to your roots in Jamaica; Jamaica land you still love. 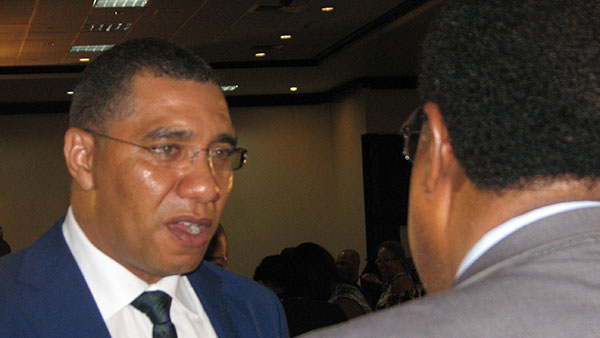 “And I know, from the many emails and the many letters and the many social media posts, that you still remain interested in the nation’s affairs. I know that your hearts swell with pride, as do ours, when our sportsmen and women fly Jamaica’s flag high, every time they represent this great nation; we continue to demonstrate to the world that ‘wi likkle but wi tallawah’!”

He continued: “It would be remiss of me not to recognise the significant contributions, oftentimes at great sacrifice, that the Diaspora makes to communities, schools and health facilities across the island. Let me express my profound appreciation on behalf of a truly grateful nation.”

The Prime Minister spent a part of his message updating the audience on some of the initiatives his administration has introduced.

“Over a year-and-a-half ago, we embarked on a plan to create prosperity for all Jamaicans. A critical objective of this policy thrust is the attainment of economic growth and job creation. We are of the firm belief that it is only through sustained growth that we will be able to provide the kind of services that our people so richly deserve. Consequently, we set ourselves a target of meaningful growth and job creation.

“We have an opportunity in this 55th. year of our Independence to normalise economic growth and prosperity, thereby reversing years of low growth. We commit to providing jobs for our people and releasing their entrepreneurial energies. Continued business and consumer confidence and a declining unemployment rate show that we are on the right path,” he relayed.

“I invite and encourage you, the Diaspora, to participate in this process. The government simply cannot do it alone. We need the participation of all our citizens, whether at home or abroad. It is therefore imperative that we build a strong and symbiotic partnership amongst Jamaicans across the globe,” he added. 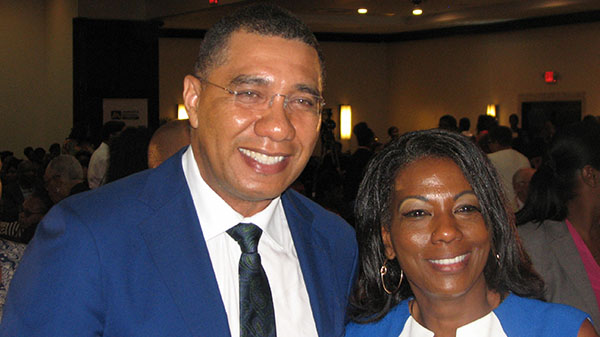 PM Holness shares a light moment with a female member of the audience during a break at the Opening Ceremony, which was held at the Jamaica Pegasus Hotel. Photo by Michael Van Cooten.

Holness stated that one of his government’s principal objectives is to make it easier for prospective investors, including members of the Diaspora, to conduct business in, and with, Jamaica.

“I know many of you, here, have expressed strong concerns about the bureaucratic processes that hinder investment. Our aim is to streamline the work of critical agencies and procedures to avoid duplication, thereby creating a more favourable business environment,” he noted.

An example of the government’s streamlining of agencies to advance efficiencies was revealed on Day 2 of the Conference, when Diane Edwards, President of Jampro Trade and Investments, revealed, during a session entitled “Facilitating Diaspora Investments”, that the registration of a new business has been improved and can now be completed, online, in a single day.

“We have passed a ground-breaking piece of legislation which, with others to come and other initiatives to be announced, will, for the first time since our Independence, empower our government to confront the breakdown in law and order and public safety in our country, and return Jamaica to a place of choice for you to come home, choose to live here, raise your families here, do business here and retire here, in Paradise, safe and secure.”

How to engage members of Jamaica’s Diaspora is a critical component of the government’s overall plan for growth and prosperity, Prime Minister Holness assured his audience.

“I want to emphasise that we are serious about strengthening the relationship between the Diaspora and Jamaica in every aspect, and so we are allocating the necessary time and resources to ensure that the national Diaspora policy adequately represents the level of commitment we ascribe to building this relationship,” he concluded.

Emceed by the Chairman of the Conference, Earl Jarrett, CEO of the Jamaica National Group, the Ceremony included an inspirational address from Jamaica’s Governor-General, Sir Patrick Allen, and the presentation of the Governor-General’s Achievement Awards to six exceptionally successful Diaspora members — two from each of the UK, US and Canada.

It also featured the brightly-coloured-uniformed Jamaica Military Band that played its rendition of Jamaica’s National Anthem; an appropriate and thoughtful prayer by Bishop Everald Galbraith, immediate past-President of the Jamaica Council of Churches; remarks from Olivia Grange, Minister of Culture, Gender, Entertainment and Sport; a welcome address from the mayor of Kingston, Senator Councillor Delroy Williams; a video presentation from the Jamaica 55 Diaspora Conference; greetings on behalf of the Diaspora, delivered by Tanesha Westcarr, a Diaspora Advisory Board Member from the UK; and energetic, choreographed Bob Marley-mimicking performances from an enjoyably entertaining group, The Boy Band 8.