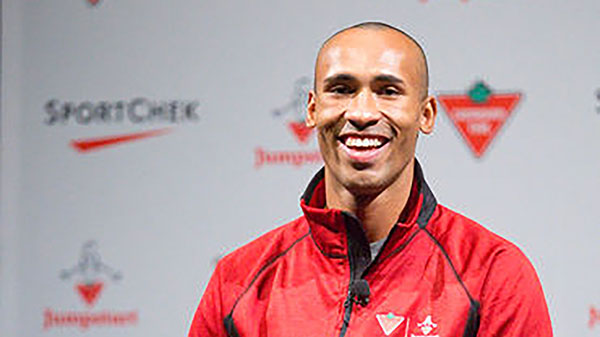 Pan Am Proud – Celebrating The Success Of Black And Caribbean Athletes

Photo above is of Damian Warner. Photo courtesy of QMI Agency.

Aside from every Torontonian, and Canadians as a whole, the Toronto 2015 Pan Am Games – which concluded on Sunday July 26 with a party-like atmosphere and concert featuring artists like Serena Ryder, Pitbull and Kanye West – really made those of us in the African Canadian and Caribbean communities proud of the performances of athletes with ethnic backgrounds from these regions.

For the sake of clarity, this is not about exclusion – especially when the successful mandate of the Games was about diversity and inclusion – rather, it is an attempt to appreciate the roots of the athletes with African and Caribbean backgrounds.

Whether it be Gavin Smellie from the 100m and 4×100 relay competitions who was born in Jamaica and came to Canada at a young age. Or it might be the gold winning decathlete Damian Warner, whose father is from Barbados and still lives there.

For athletes whose cultural roots never reside in one national distinction – where there is often a confluence of identities – Canada will celebrate their successes at the Games representing the Maple Leaf … while some of their relatives, parents and friends might celebrate them because of the athletes original birthplaces or where their parents migrated from.

This is a celebration of our athletes.

Alia Atkinson, is a proud Jamaican, who has been featured in a previous article and referenced in another. Atkinson won the silver medal in 100 metre swimming event at the games. I think her fitting title from here on out should be “The Jamaican Queen of Swim”. While she’s not Canadian, she does make many of us proud to share her Caribbean roots.

What can one say about Andre De Grasse to properly describe his performance at the Games or that fact that he is only 20 years old and has only been running for a little over three years? I guess the best one-word to surmise his emergence on the track and field scene – and likewise into mainstream recognition – is phenom. Yes, De Grasse’s performances in both the 100 and 200 metre events were phenomenal and he displayed his outstanding abilities for the world to see. Most memorable for me was his victory in the 200 metre event. Running in lane eight, De Grasse seemed to be losing the race only to mount a remarkable comeback in the last 50 or 40 metres. Personally, I have never seen such a drive in that distance against world class runners. In the process, De Grasse set both a Pan Am and a Canadian record.

How about the Canadian Women’s National Basketball team, led by 19 year old, University of Connecticut guard, Kia Nurse? It was indeed a defining moment for the women’s team as they played in front of a sellout crowd at the Mattamy Athletic Centre. The sports gene is definitely ingrained in Nurse – her father, Richard Nurse played in the Canadian Football League (CFL) with the Hamilton Tigercats and the Winnipeg Bluebombers. Her sister, Tamika Nurse, used to be a point guard for the Oregon women’s basketball team and also at Bowling Green State University. Nurse is also the niece, by marriage, of former NFL quarterback, Donovan McNabb. Her performance in the gold medal game against the Americans really stood out as she scored 33 points by constantly penetrating the US defence and making timely baskets, especially in the fourth quarter. It’s no surprise she was chosen as the flag bearer for Canada at the Closing Ceremony of the Pan Am Games last week.

How many in the African Canadian and Caribbean communities know who Jennifer Abel is? Maybe it is because Abel grew up in Laval, Quebec… or maybe it is because her sport is diving. Abel, the diver whose ethnic background is Haitian, won gold at the games in the three-meter event. Like Atkinson, “the Jamaican Queen of Swim”, Abel is part of a very small club of black Canadian athletes who compete in the water. Her gold medal performance secured a spot for Canada in the diving competition, at the Olympics in Rio next year.

Born to Ghanaian immigrants who moved to Surrey, British Columbia when she was an infant, Christabel Nettey grew up loving sports and excelling at it. How could she not when she has a sister, Sabrina, who at 13 years old was considered one of the best young athletes in both the long jump and triple jump. Nettey, in some ways, has now stepped out from the shadows of her older sister as she won the gold medal with a distance of 6.90 metres in the long jump event. Like Abel, her goal and focus is now on the Rio Olympics.

Emmanuel was born to Bajan parents – at one point in her career she hoped to run for Barbados but did not make the team. Fast forward a few years later, after hundreds of hours of hard work and determination – Emmanuel improved and made the Canadian national track team.

Hyacinthe is another athlete from Quebec who was also born to Haitian parents. The 26 year old who specialises in the 100, 200 and the 4×100 relay tracks events is considered a veteran in the sport; competing since 2005, her best performances before the Pan Am Games were in 2009, 2010 and 2013 where she placed first or second in all her respective events.

Both Westney and Bingham are young and they add to a promising future for the women’s national team. The next challenge for these women is to secure spots on the team that competes in Rio.

As I stated earlier, Damian Warner has Barbadian roots. Warner is one of the more established track and field athletes representing Canada. The Decathlete captured the gold medal at the Games, in an event which I personally consider the most grueling and physically demanding competition of all track and field sports. Aside this gold medal performance, he also won a gold and a bronze medal in the Commonwealth Games (2014) and the World Championships (2013) respectively. At 25 years old, Warner still has a lot to offer the sport and Canada. I am sure a whole lot of Canadians with Bajan roots will also be rooting for him.

Other athletes to celebrate who won medals at the Toronto Pan Am Games include: Braxton Stone-Papadopoulos (gold in women’s Freestyle 63 kg wrestling), Ahmed Mohammed (gold in the 10000 metre long distance run), Nikkita Holder (bronze in women’s 100m Hurdles), Haislan Garcia (bronze in men’s Freestyle 65 kg wrestling) and the players from the men’s basketball team who had an epic semi-final overtime victory against team USA. Some of the players to note are: Anthony Bennett, Andrew Nicholson, Melvin Ejim, Dillon Brooks, Junior Cadougan, Daniel Mullins and Jamal Murray (Murray is one to keep an eye on, as he is expected to have a bright future in the sport).

I want to reiterate: we should praise the accomplishments of all the athletes who competed at the Toronto 2015 Pan Am Games, regardless of their race and ethnic background. The goal here is to shed some extra light on those who are first and second-generation Canadians who share our cultural roots.

To us in the African Canadian and Caribbean communities, celebrating the successes of our children, cousins, aunties, uncles, fathers and mothers will always have a dualism that consists of cultural and national loyalties.