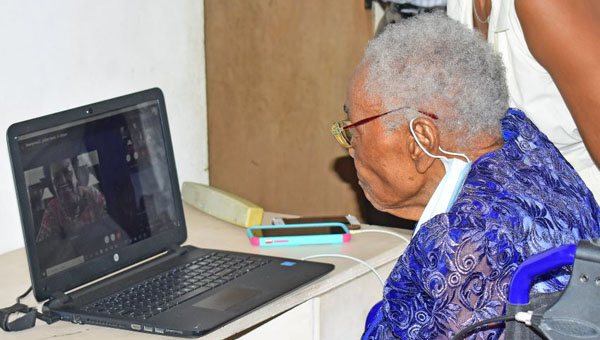 ST. JAMES, Barbados (Tuesday, January 19, 2020) — Edna Lewis is the epitome of the popular phrase “disability is not inability”.

Stricken with polio at the age of three, which left her with a deformed leg, that did not stop her climbing trees, farming the land, using public transportation to go places and raising seven children — two of whom are deceased — and grandchildren.

A beaming Edna, surrounded by family members, gladly accepted a basket of flowers, a bottle of non-alcoholic wine and a birthday card from Governor-General, Dame Sandra Mason, to mark the significant milestone.

Dame Sandra, and other relatives from the United Kingdom, United States and Canada, joined, via Skype, during the special celebrations at Westmoreland, St. James, on Sunday.

In paying special tribute to Lewis, Dame Sandra said it was “on the backs of persons, like Edna, that we were allowed to reach the life that we have reached”.

The Governor-General encouraged the island’s seniors to teach young people “the value of sacrifice, respect and the value of understanding”.

Lewis’ grandson, Joel Searles, described her as an inspiration.

“When everybody talks about someone that would have been an inspiration, I hear people mentioning what I would consider abstract people, from all parts of the world, that they have never met. But for me, it was my grandmother.

“I came along hearing about my grandmother and knowing that she had polio from age three, and when you talk about life expectancy when you have a disability or an illness, it usually shortens your life span. She has obviously showed that she is way better than most,” Searles recounted.

He continued: “If you talk about a kind-hearted person; she told me that she never got into an argument with anyone … and you wouldn’t be able to go anywhere on Westmoreland and hear of ‘Clareen’ talking somebody’s name. She is just the epitome of what you would expect in someone who would be a grandmother and mother to so many.”

As Barbados moved to a more inclusive society for wheelchair users, Searles recalled his grandmother climbing trees, working the garden and doing just about everything.

Lewis, who still has a sharp memory, thanked everyone for their well-wishes, including the Governor-General.

“I am still holding on Lord, and I am not going to let go. You are still looking after me today. Had not for You, I would have gone already,” she affirmed from her wheelchair.

She was a pupil of St. Silas School, and, in adulthood, married Lester Garner Lewis at the Salvation Army in Speightstown. He died, tragically, in a bicycle accident in 1944.