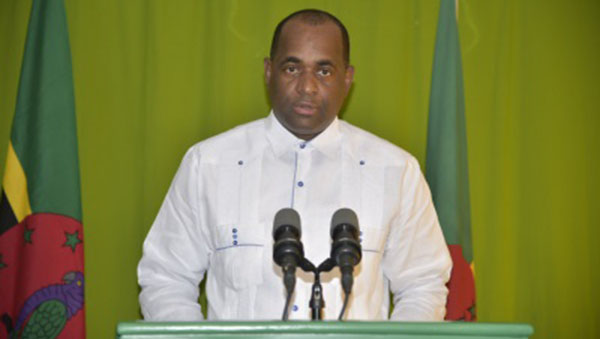 Speaking at the first daily news briefing since the Category 5 hurricane slammed into the country on September 18, killing at least 28 people and leaving billions of dollars in damages, Skerrit said that he held discussions with the insurance companies, here, and urged that payment be made, as quickly as possible, to property owners.

But he said “my hope is that the private sector do not put the money in offshore banks…and, instead, put it back in the economy”.

He reminded the business owners that their businesses had been built on the support of Dominicans, adding “all that we have in Dominica was given to us by Dominicans and, therefore, do not take the easy way out” — take the insurance payment and close down the business.

Skerrit, who was due to address the nation later on Monday, said that he would announce a “very generous package we received from the World Bank,” adding “there are commitments being made and we will be guiding those commitments to fit within our own national plans”.

Skerrit had earlier announced that he would be visiting Washington for talks with the World Bank for loans and grants, totalling US$100 million, after the financial institution had provided at least US$60 million.

“Our declaration that we shall make Dominica the first green climate-resilient nation in the world has captured the imagination of countries, organisations, institutions and individuals. It is important for us to work towards achieving this; it is going to require the commitment of all of us.”

During his briefing, Prime Minister Skerrit said the government was contemplating declaring a “Day of Caring”, bringing all Dominicans together in the rebuilding exercise.

“The pace of our recovery will depend on each of us and not solely on the government…and donor community,” Skerrit said, noting that while he was not critical of the present re-construction efforts, “I still believe there should be a greater effort …on the part of the community, organisations and churches…” he said.

He added while, for instance, tarpaulins had been provided to people to cover their homes, some, such as the elderly and the physically challenged, were unable to take advantage of the offers.

“At the end of the day it is us who have to rebuild this country,” he said, adding “this hurricane has touched every single individual”.

Skerrit said, that over the next six months, there would be no value-added tax on food and other items, and that would allow the business community to “make the food cheaper for our people”.

“There is no VAT, no import duty and…we should not seek to profit from the plight of our people,” he said, adding that building materials will also enjoy the VAT duty free concessions.

Skerrit said that the Port Authority should apologise to the international aid donors and others for imposing a fee on the materials being brought to the island to assist in the rehabilitation and reconstruction exercise.

He said he would send a formal letter to the Port outlining his concerns.

Skerrit said he was satisfied that there were ‘small positive signs” of economic recovery in the country, even as the government was not able to receive any form of revenue, while spending funds to ensure the food materials are provided for many people.

He said there would soon be a gradual reduction in the distribution of relief supplies, to be replaced by food vouchers to be used at supermarkets.

Heavy rains have been battering the island as a result of a trough system, the Met office said, which “is expected to continue to generate moderate to heavy showers and isolated thunderstorms across Dominica during the next 24 hours.

The Met Office said that while there would be some “fluctuations in the intensity of showers, the thunderstorms, along with some gusty winds, would continue to affect the island”.

Skerrit urged nationals to be extremely careful as a result, noting that some places have already reported that bridges and roads have been compromised, and certain plans shelved, as a result.

“We had planned on opening many schools, but the weather hampered that. It would have been a positive sign. We are hoping to see how the weather pans out and a statement will be made by the Ministry of Education later,” Skerrit said, regarding the re-opening of the schools.