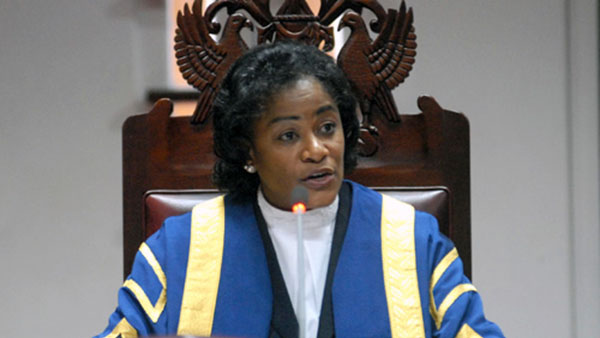 Speaker of St. Lucia's Parliament, Leonne Theodore-John, who passed out in chambers, is expected to be released from hospital today.

CASTRIES, St. Lucia, November 1, 2017 (CMC) – The Speaker of the St. Lucia Parliament, Leonne Theodore-John, is likely to be released from hospital, today, after she collapsed during a marathon session of the House of Assembly.

Theodore-John, a lawyer by profession, is reported to have complained about feeling unwell, shortly after 7.00 pm (local time) yesterday, prior to the start of the debate on the Airport Development Bill, one of several pieces of legislation debated and passed on Tuesday.

She is reported to have fainted and was taken to the nearby Tapion Hospital.

Prime Minister, Allen Chastanet, said, “On behalf of the government of St. Lucia and the Honourable Members of Parliament, I wish the Honourable Speaker of the House, Mrs. Leonne Theodore-John, a speedy recovery, following yesterday’s House of Parliament session.”

“I have since spoken to the Speaker of the House and she is in good spirits and doing much better, and we continue to pray for her full recovery,” he added.