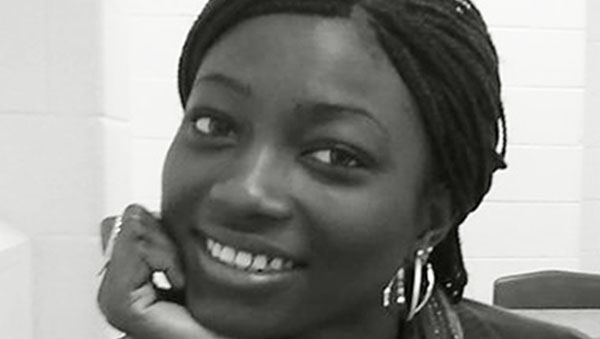 In December, Pridenews online ran a story on Dr. Beverly-Jean Daniel, who founded and developed The Bridge, a phenomenally-successful student engagement and retention program that is aimed at increasing the engagement, retention and graduation rates of African/Black/Caribbean students enrolled at Humber College. The goal of The Bridge program is to foster and encourage student success and excellence. This month, we will profile the final two of the Bridge’s alumni — Efe Chehore, today, and Harriet Badua-Baffoe next week.

TORONTO, Ontario February 9, 2018 — “Shine bright like a diamond,” Rihanna once said. But in order to do so, one must know, and believe in, their own worth and value. It seems we are all learning that to some degree.

Efe Chehore, a former participant of the mega-successful Bridge Program at Humber College — founded by Professor Dr. Beverly-Jean Daniel, its former coordinator — is one example of this lesson. Her belief in her ability to be a light to others is what led her to the program in the first place, albeit through the humble guise of wanting to help others like herself.

Growing up, Efe was bullied and teased for her darker skin and natural hair; but she soon learned that she needed to stick up for herself and believe in who she was. Unfortunately, doing so often meant fending off unwanted behaviour and bullies – something authorities quickly interpreted and labeled as problem behaviour, without understanding the root cause.

Efe was placed in behavioural and Special Education classes, contributing to what she felt was a sort of chaos in her young life, making it difficult to focus on her studies.

She began believing that people of African descent were never good enough and could not amount to anything, a belief that was crippling at best. Efe remembers the scars these experiences left her with.

Her early experiences, nonetheless, convinced her that she wanted to work with youth in trouble with the law, as she could see the trajectory of her own experiences and knew that she could relate.

She wanted to be a voice that could listen first, in a system that is quick to “throw the book at”, as she says, alleged offenders. And so, she entered the Community and Justice Services program at Humber College.

At first she was getting average grades, just another student in the mill. But when she came across the Bridge program, she realized there was so much more she could do, and began excelling in her classes.

Efe’s professors, coordinators and advisors from The Bridge – a Humber College program for Black youth providing career mentorship and support around identity – have always been highly supportive of her educational growth.

Where once she had doubts in her abilities and herself, they helped her see her own potential, boost her confidence, and find the strength she couldn’t when it was taken from her – and worse, denied – in her formative years.

Where once scars were imprinted on her psyche for being who she was born to be, The Bridge’s ‘empowerment sessions’, requiring students to read Maya Angelou’s famous poem, “Still I Rise”, frequently, imprinted more beautiful images for Efe to hold on to. She could now see herself anew every morning, and see that she is, in fact, beautiful.

The Bridge, she admits, brought her out of her bubble, cajoling her to speak out when she would otherwise stay quiet, and convincing her to trust her own ability to communicate what she needed to say.

She believes that without The Bridge she may have been just another “number” at a college, not the individual making the difference she is today. And she is making a difference.

She was selected into her first choice of Humber field placement after a successful interview, demonstrating her passion to support and mentor young people in the system.

In this instance, it was for children with incarcerated parents, at an organization called FEAT (Fostering, Empowering and Advocating Together for children). 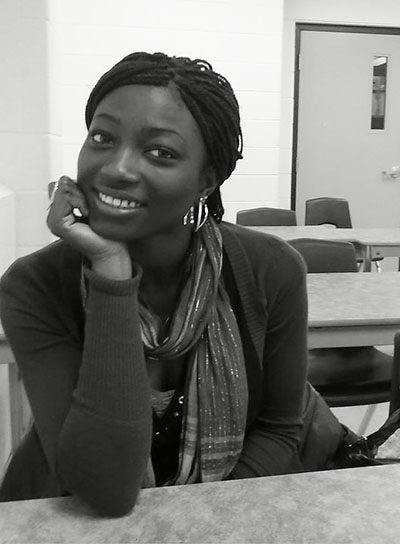 Efe Chehore wanted to be a voice that could listen first, in a system that is quick to “throw the book at” alleged offenders. Photo contributed.

Chehore worked as a peer mentor there, where she helped plan youth activities and shop for food supplies; helped guide students with their homework and provided emotional support and mentorship; and even accompanied youth on field trips.

Because Efe prides herself on her work, often taking the initiative, her work, which ran typically from 10 in the morning to 7 or 8 at night, could sometimes be long and exhausting.

Aware of the potential for burnout in this line of work, I asked Efe what she does for self-care, since, in order to help others, we must first learn to help ourselves.

Luckily for Efe, she has also learned this important aspect of the work, which will fuel her for years to come.

Some of the self-care fare she treats herself to, include listening to music; going out with friends; reading a book to take her mind off of things for a while; just having someone to talk to and express how she feels, even if the situation seems minor; and being around water, which she finds very calming.

She admits that even the heaviness of the news or a client having a bad day can sometimes have an adverse effect and you need to know when, and how, to remove yourself from a situation, and to remind yourself that “it’s not you”.

This is particularly true for empathic people, like Miss Chehore: people highly sensitive to their environment; to the point where they can feel the emotions and experiences of others, without explanation.

Even when Efe has been hurt, she finds she can remove herself from the position of the ‘hurt person’, and understand what is going on. She can understand others’ differences and uniqueness, and where they are coming from, even when they may be in the wrong.

She helps folks understand others’ experiences, and uses her unique skill to bring about conflict resolution, passing on whatever useful information she may have gained in a given situation.

It can be strenuous sometimes, she tells me — being in the middle can be draining, and like anything else, there will always be those who will take advantage.

Efe admits that, at times, it is really not fun being empathic, and can even be a “pain in the butt”. However, being a spiritual person, as empathics often tend to be, Efe calls on a higher power when she feels the need to.

And once Efe is interacting with the children, she reminds me, she forgets all the occasional stresses and fatigue that sometimes comes with this line of work; gets “into the zone”; and finds herself leaving at the end of the day feeling quite happy.

Whatever it takes, Miss Chehore knows the importance of “resetting”, in whichever way you can, so you can start fresh the next day.

Its unique training and heartfelt guidance gave her permission to honour herself, see the good she has to offer the world, and begin believing in it, in a most profound way.

Much of the offerings, aside from career counseling and mentorship, are very motivational, building students up, Efe says.

She never thought she could be an ‘A’ student, for instance, but after The Bridge, she was very proud to see this change in herself.

She saw a direct correlation between the effort she invested and the grades she would get, as a result of her own hard work. By contrast, when she did not put in the hard work and time, the results reflected that too.

“What you put into life,” she told me, “might not always be what you get out of it, because we really have no control”.

But with academics, she learned that what you do put in, you get back. She saw it was an affirmation of her self-worth and confidence that she is able to do so.

In her own experience as a black female, Efe knows society places its own labels and expectations on the Black Community, particularly for the men. Her hard-earned wisdom, however, has taught her that it is not about proving society wrong, but in believing in yourself and achieving the goals you set out for yourself.

Efe is eternally grateful to The Bridge Program for allowing her to see past the limitations, and she has set a string of new goals to take her farther than she ever imagined.

Although she does not know yet where she will end up and is still researching her options, she considers post-graduate study for counseling young women or youth in troubled situations. Any other aspect of restorative justice is also a possibility.

Miss Chehore now believes there is room for someone like her in today’s justice system; one that at present would too quickly dismiss young offenders before they truly hear what they have to say.

It is a blessing for us, then, when a diamond that started out in the rough, like Efe did, begins to see its own value, is ready, and does not back down from bringing it to the world.

If you think The Bridge Program may be for you, would like to become a mentor, or want to find out more, please contact Dr. Beverly-Jean Daniel at danielconsultinggroup@gmail.com