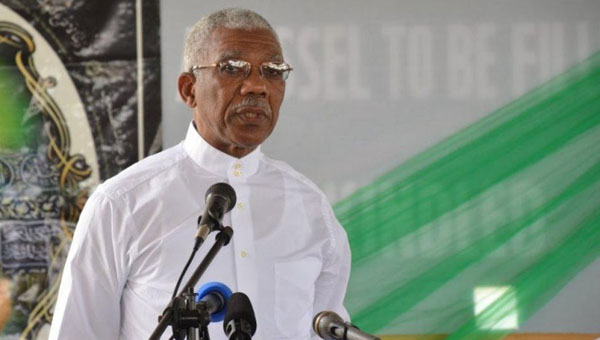 Guyana’s President Adamant He Will Choose Candidate For Prime Minister

GEORGETOWN, Guyana, November 11, 2019 (CMC) – President, David Granger, leader of the A Partnership for National Unity (APNU) which is the largest party in the ruling coalition, has insisted that he will be the one to choose a Prime Ministerial candidate ahead of next year’s polls, despite the smaller Alliance for Change (AFC) insisting that it should make the choice.

Granger said, last Wednesday, that when the time is right, he will select a nominee that will align with what is best for the people of Guyana in the March 2, 2020 regional and general elections.

The APNU has been in discussion with the AFC on the selection, with the latter pointing to the Cummingsburg Accord, which brought the parties together in 2015, and under which the APNU nominates the Presidential candidate and the AFC, the Prime Ministerial candidate.

But President Granger said he will choose the best candidate.

“I am a prudent and wise leader, and I will make the choice which, I believe, will deliver the best results for the people of Guyana. My objectives and that of the six parties in the coalition would be to ensure that Guyana gets the best and we’re working on that,” the Head of State told reporters, when asked about his running mate.

“I want to make sure that we win and once we win, that the country is well-governed. So, whoever the nominee is, will be subject to scrutiny,” the President added.

Granger reiterated that he was interested in policies and not personalities.

“Once the principles are agreed, we can move forward. I don’t want to name names now,” he said.

Last week, Granger said the APNU and AFC were holding preliminary talks to work through a three-stage process. He said that stage one – the agreement of the core principles – had already been completed. One major point of the core principles, decided on by the two parties, was that nothing appearing in the Cummingsburg Accord should conflict with the Constitution.

President Granger said the two sides addressed those issues appearing in the Accord of 2015. Among those, was the scope of a political party to choose a Prime Ministerial candidate.

Meanwhile, reporting on his meeting with AFC leader and Minister of Public Security, Khemraj Ramjattan, last Thursday, President Granger said the leaders dealt with issues that were referred to them by the respective teams, during the preliminary talks.

He said there has been progress and noted that coalition partners will have the opportunity to make certain recommendations. The two sides have since met again, and hope to conclude the talks by December 1.