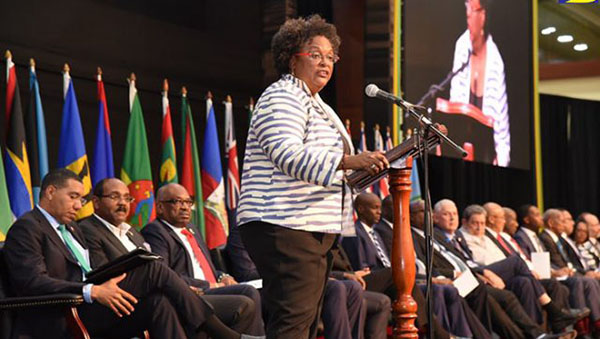 Prime Minister of Barbados, Mia Mottley, addresses the opening ceremony for the 39th Regular Meeting of the Conference of Heads of Government of CARICOM, on Wednesday (July 4), at the Montego Bay Convention Centre in St. James. Photo credit: Michael Sloley/JIS.

KINGSTON, Jamaica, July 6, 2018 (CMC) – Barbados’ Prime Minister, Mia Mottley, has proposed that the process, used to verify Certificates of Recognition of CARICOM Skills Qualification, be revamped to shorten the time in which this exercise is undertaken.

This, she suggested, could be done by adjusting existing legislation, to allow the burden of proof to be shifted to the applicant, to swear to the authenticity of the certificate, and if later found to be fraudulent, to show cause why the document should not be revoked.

“If we do that simple amendment to the legislation, it means that the process, which is taking two (to) four months, can now be done within two to three days, at most, with respect to accreditation,” she said.

The Barbadian leader made the comments as she addressed the opening ceremony for the 39th Regular Meeting of the Conference of Heads of Government of CARICOM, at the Montego Bay Convention Centre  on Wednesday.

The Certificate of Recognition of CARICOM Skills Qualification guarantees qualified nationals the benefit of moving and working freely across the region. The document, which is a provision under the CARICOM (Free Movement of Skilled Persons) Act, allows these privileges, without the need for a work permit or permit of stay.

Mottley lamented that the matter of accreditation and the issuance and verification of skills certificates have impeded the day-to-day lives of too many CARICOM citizens.

“This is of great concern to us…We have to change and change urgently,” she said in her maiden CARICOM speech.

Mottley pointed out that in her country, between 2006 and 2018, the Accreditation Council issued 2,039 Certificates and verified another 1,122. Out of the 3,161 certificates, only 10 were found to be fraudulent.

“In other words, 0.3 per cent of certificates that we spent months seeking to verify, were fraudulent,” she said.

Mottley stressed that in the age of technological advancements, such as block-chain technology, “we must be able to do better at real-time communication, particularly as we go forward in the issuance of skills certificates and diplomas that will allow for more ease of verification”.

The Barbadian Prime Minister also indicated that her government will remove the visa requirements for Haitians travelling to that country, as it seeks to be more inclusive in its treatment of Caribbean Community (CARICOM) nationals.

Mottley said the stipulation “breaches the fundamental tenets that bind us together under the revised Treaty of Chaguaramas”.

She pointed out that this arrangement is unfair, given that persons, who are not members of the community, are allowed to travel freely into the Caribbean without visas, and that Haiti “took the extraordinary step of signing the Revised Treaty of Chaguaramas and committing to a CARICOM single market and single economy”.

The Revised Treaty establishing CARICOM, including the CARICOM Single Market and Economy (CSME), was signed in 2001.

Among the objectives are improved standard of living and work in member countries; accelerated, coordinated and sustained economic development; and an organisation for increased production and productivity.

Among the key items on the agenda of the three-day meeting underway in Jamaica, are crime and violence, disaster management and climate change, and the CARICOM Single Market and Economy (CSME).