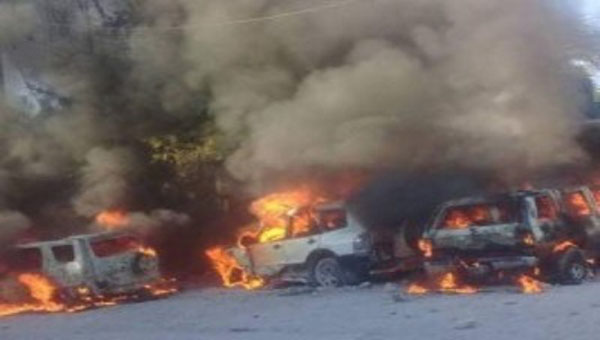 The three vehicles, including one belonging to a senior police officer, which had been destroyed by fire, in the violent land dispute. Photo credit: CMC.

PORT AU PRINCE, Haiti, January 29, 2019 (CMC) – The Mayor of the coastal tourist town of Montrouis, Blaise Elysée, has called for the authorities to help put an end to a decades-old land dispute that resulted in the death of one person, yesterday.

Elysée has also denounced the violence, as he confirmed the incident ,on Monday, while urging the authorities to restore order in the community.

The 60-year-old land dispute, between two families, has already caused the deaths of several people in the past, and Monday’s incident, sparked over the problem of territorial demarcation between the commune of Montrouis and that of Arcahaie, resulted in a new round of violence between residents of both communes.

Eyewitnesses said gunshots were fired and one of the major roads had been blocked and three vehicles, including one belonging to a senior police officer had been destroyed by fire.