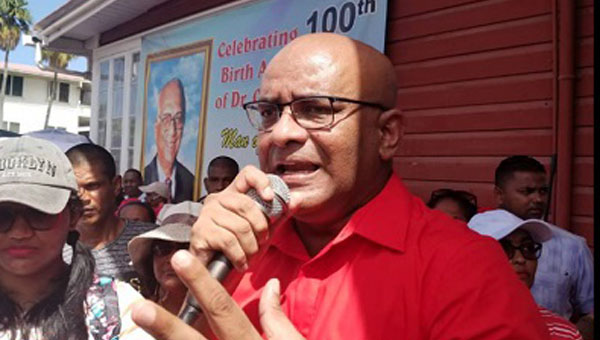 GEORGETOWN, Guyana, February 5, 2019 (CMC) – Opposition Leader, Bharrat Jagdeo, today, led supporters of the main opposition People’s Progressive Party (PPP) in a demonstration, near the Guyana Elections Commission (GECOM) office, calling for fresh general and regional elections, as the government made good on its plan to file an appeal against a High Court ruling that re-affirmed its downfall, following a vote of no confidence, last month.

GECOM is meeting, today, amid speculation that it could announce when general elections could be held.

“If elections are not held by March 19, from that day forward, this government becomes illegal and unconstitutional,” Jagdeo told supporters — in keeping with the Guyana Constitution that states elections must be held 90 days after the government is defeated in a vote of no confidence.

Jagdeo had, on December 21 last year, successfully tabled the motion that led to the downfall of the three-and-a-half year old David Granger-led coalition — A Partnership for National Unity (APNU)/Alliance For Change (AFC) — administration.

Last week, acting Chief Justice, Roxane George-Wiltshire, ruled that the motion, which had received the support of then-government backbencher, Charrandass Persaud, was valid, and that the government ought to have resigned, immediately.

But Attorney General, Basil Williams, in appealing the ruling, said that Justice George-Wiltshire “erred and misdirected herself in law”, when she ruled that the no-confidence motion was validly passed by an absolute majority of 33 to 32 parliamentarians, in keeping with Guyana’s constitution.

The APNU coalition had previously enjoyed a one-seat majority in the 65-member National Assembly and, since the High Court ruling, Jagdeo has called on Granger to name the date for the elections.

The Attorney General is also of the opinion that the High Court’s “decision was unreasonable and cannot be supported, having regard to the evidence”.

The government has already indicated that it intends to appeal all the way to the Trinidad-based Caribbean Court of Justice (CCJ), the country’s final court.

GECOM is meeting as both the government and the opposition remain at odds, over whether there should first be house-to-house registration.

The government’s three elections commissioners are calling for house-to-house registration, while the opposition maintains that elections must be held, no later than March 20, 2019.

Jagdeo warned that the protest is the first of activities to force GECOM and the government to name the date for the polls, and dismissed speculation that GECOM’s timeline could result in the elections being held in July.

Jagdeo told reporters that he wanted GECOM to understand that the proposed timelines are not tenable.

“They have, as a Constitutional body, to respect our Constitution, and now that the legislature has spoken and the Judiciary has spoken, they need to follow the timelines, imposed by our constitution,” he said, adding that GECOM needs to be working in an accelerated manner to meet the three-month deadline for the hosting of elections, after a successful no confidence vote.

Jagdeo said he believes an internal process could be used to rid the list of those voters, who might have died since the last elections.

“I heard this argument about young people being disenfranchised, but, you know, the continuous registration starts with getting registered, from the time you are 14-years-old, and so they could have extracted those names of persons who will be 18 by election day and put them on the list,” he said.

Meanwhile, the Private Sector Commission (PSC), the main umbrella private sector body, here, is calling for the elections to be held within the 90-day period.

“We must underline the fact that when the Attorney General sought a Conservatory Order from the Chief Justice to preserve the “status quo ante”, his application was rejected by the Chief Justice.

“Clearly, therefore, in the view of the Commission, her ruling remains in place, unless successfully appealed in a superior court. The Commission, as a consequence, expects the President and his government to respect and honour the decision of the Chief Justice, and to proceed to have elections, held no later than March 21st, as required by Article 106(7) of the Constitution,” the PSC said.

The PSC added that it was also concerned that government officials were making statements, that the work of the present administration continues as normal, and warned that the Caribbean country could be approaching a period of political instability, characterised by an illegal government.

“The Private Sector Commission speaks not only for the business community, with hundreds of billions invested in the development of our economy and the employment of some 60 percent of our workforce. In this case, we believe that we speak for the majority of the nation, when we express our concern over public statements, which deny the express ruling of the Chief Justice; statements which could lead our country into a situation of grave instability and an illegal government resulting,” the PSC said.