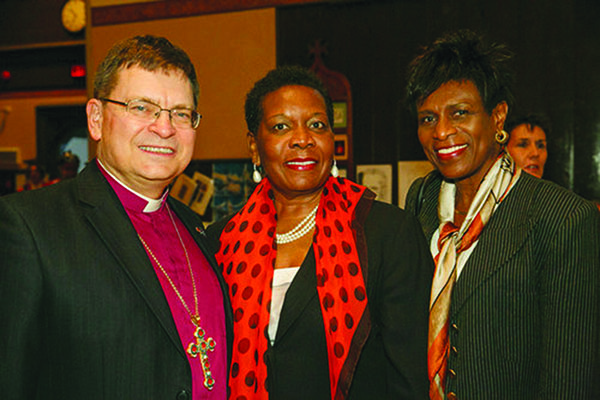 TORONTO, Ontario – On the first day of 2014, Jamaica-born philanthropist, entrepreneur and business executive, Delores Lawrence, noted for her hard-nosed, forthright and honest management style, was honoured by the Anglican Church in Toronto.

Lawrence — the founder, president and Chief Executive Officer of Nursing & Homemakers Incorporated (NHI) — was one of 48, who received the highest award given to lay Anglicans, the newly created Order of the Diocese of Toronto, from Archbishop Colin Johnson at St. James Cathedral, to celebrate the contributions of lay people.

The Order, which was created under the authority of the Archbishop of Toronto and the College of Bishops, and with the approval of the Diocesan Council, recognizes and honours members of the laity in the Diocese who have given outstanding service over a significant period of time in their volunteer ministry.

Archbishop Johnson said that while Hollywood movies seemed to be preoccupied by superheroes, the Order of the Diocese of Toronto recognized the everyday good deeds of ordinary folk in the Anglican Church.

“These 48 people are being honoured because someone saw in them the gifts of God, the face of Jesus,” he noted.

Their work at the parish, area or diocesan level provided the church with the capacity to do good things, he added.

Many of the inductees to the Order said they were surprised and honoured to receive the award.

A graduate in Lay Ministry from the Anglican Church’s Wycliffe College, which is federated with the University of Toronto, Lawrence has been a member of the Anglican Church Diocese of Toronto Executive and Diocesan Council since 2006, and was the co-chair of the Diocese’s recent, successful $50 million “Our Faith Our Hope” fundraising campaign.

Lawrence, who migrated to Canada at the age of 16 to pursue her education, is a person of deep spiritual beliefs and religious convictions and embodies enormous faith. And she has served in various roles at her home church, St. Matthew the Apostle-Oriole, where she is currently a parishioner, since 1972.

For 13 years, Lawrence served as a church warden, is a member of St. Matthew’s Advisory Board since 1985, and is the Synod representative and Chair of the Accessibility Committee.

She is also the Chair of the Toronto Bishop’s Company Dinner Committee, and serves on the Nomination Committee and the Advisory Commission.

Married with two children, the former Chair of Seneca College’s Board of Governors has implemented several philanthropic initiatives that have opened many doors and helped numerous individuals in various communities in Canada and internationally.

Over the past several years, Lawrence through NHI, has provided several students with job placements and has provided mentoring for various summer programs. She has also organized shipments of a wide variety of medical equipment and supplies to various hospitals and infirmaries in the Caribbean and have facilitated visits by politicians and medical students from the Caribbean to hospitals and long term care facilities in Canada.

An Order of Ontario recipient, Lawrence, who served as a board member and Chair of the Academic & Patient Care Committee of Sunnybrook & Women’s Hospital, has received many awards and recognitions.

Between 2004 and 2010, she was the Chair of Operation Vote Canada, a non-profit organization formed to educate, motivate, promote and support Canadian’s participation in all levels of government. Appointed to the Ontario Judicial Council since 2010, Lawrence is a Board member of the Toronto International Film Festival Group Capital Campaign.

Appointed as a delegate of the Canadian Government to the First Canadian business women trade mission to the USA in 1997, Lawrence received the University of the West Indies Graduate Nurses Alumni Award in 2002; the African Canadian Achievement Award for Excellence in Business in 2003; the Queen’s Jubilee Medal in 2013; Province of Ontario Volunteer Award; Black Nurses Network Award for Innovation and Entrepreneurship in 2007; Jamaica Canadian Association Community Award; Planet Africa Award-Enterprise in 2009; Harry Jerome Award in 2010; and in 2013, for the 9th consecutive year, was named to Canada’s top 100 Women Entrepreneurs Canada list.

Lawrence believes that without her profound spiritual convictions and faith, she would not have accomplished all that she has to date.

On New Year’s Day, the Order of the Diocese of Toronto recipients gathered in the east aisle of the cathedral and came forward one by one as their citations were read. After the presentation, the members gathered for a group photo and also to have their pictures taken individually with the bishops present.

The medal presentation took part during choral evensong at the cathedral. The service was preceded by the Archbishop’s Levee, which included the traditional greeting by the bishops, a ringing of the bells and refreshments.

The creators of the Order, referring to Lawrence and the other recipients, opined, “We give thanks to God for the work and witness of those faithful lay persons in our Diocese who, in the exercise of their baptismal ministry, have demonstrated that their light shines, their works glorify.”