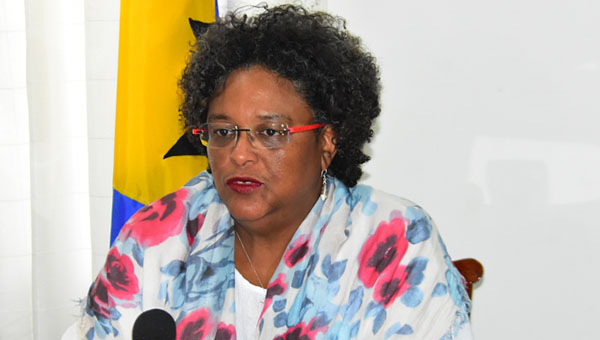 BRIDGETOWN, Barbados, February 11, 2019 (CMC) – Prime Minister, Mia Mottley, has hinted at more layoffs, within the public service, as she promised to update Barbadians on her government’s external debt restructuring plan.

“Those discussions are continuing, and the public will be advised, shortly, of what we will be doing, with respect to the foreign debt situation,” Mottley said on a radio program here.

She told listeners that “the truth is, the foreign debt has always been the smallest part of our overall debt, it’s just over 20 percent”.

“But we do anticipate that we will have to bring resolution to that, within the next few weeks to months,” Mottley said, noting that her government, which came to power in May last year, had inherited more than BDS$15 billion in public debt.

She stated that workers at state-owned enterprises could be sent home, as the government goes about restructuring the ailing economy.

“We’ve sent home so far, just about 1,000 [people],” she said, adding “there are still a few more layoffs, what I call the peak structural layoffs, to come in one or two state-owned enterprises.”

Prime Minister Mottley said that the additional layoffs will come during the third phase of the her administration’s restructuring program.

“Phase three starts in April, this year, and goes to December 2020, to deal with some of those state-owned enterprises that require a greater amount of time and process to go in and do what has to be done, so that you don’t end up without the services that have to be delivered.”

“No wonder you heard the former governor of the Central Bank talking about sending home about 5,000 or 6,000 people……But imagine what would have happened if we’d sent home five times that, if you have the kind of crying and dislocation that we’ve seen, legitimately, from what we sent home,” Mottley said.

She said also that she had no qualms with the suggestion, made by the trade unions regarding overtime, adding “the restriction of overtime was not a suggestion of the government”.

“It was a suggestion that came from the unions in the social partnership. We think that it is a fair comment, because if we can restrict overtime to allow less people to be sent home and laid off, I think that is a fair thing,” Mottley said.

“These are some of the things that we have been dealing with, and I ask Bajans to stay focused. You cannot say that the Government does not have a growth program, when the same Barbados Economic Recovery and Transformation is premised on a growth program and not only austerity measures.”

During the radio program, Prime Minister Mottley sought to re-assure Barbadians that the country will be successful in building a new society, giving more opportunities to citizens, rooted in the premise of fairness and justice, and that give Barbadians a sense of pride again.

“Barbados is coming back, economically and socially. We’re not there yet, we have to stay the course, we have to remain focused.

“The community – regionally, internationally and locally, the majority of people with whom I interact – feel that Barbados is coming back and want to give us that chance, but they recognize that this is not a 100-metre race. This is a marathon. We are passing all the right signs, we’re doing all the right things, but we cannot replace time. Time has to be gone through in order for us to finish the course.”

She described the Barbados economy as a patient that was suffering for a decade.

“The truth is that the medicine has only been applied for the last six months – so let’s give it a chance. So far, the medicine, which is being applied, is far less bitter than it might otherwise have been.

“There are those who did not believe that the domestic and the foreign debt restructuring should be part of the equation; and we said no, because the saving that we get in interest are approximately BDS$500 million, and the savings that we will get this year, in amortization and principal, is about BDS$800 million,” she told radio listeners.