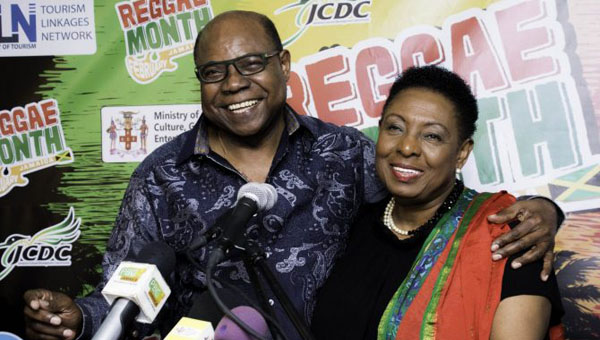 Jamaica's Minister of Culture, Gender, Entertainment and Sport, Olivia Grange (right) seen recently sharing a light moment with the Minister of Tourism, Edmund Bartlett at the launch of Reggae Month 2019, which is being organised by both ministries.

Grange made the announcement at the screening of the film, ‘Legends of Ska’.

“The film side of Reggae doesn’t get mentioned that often, and this is mainly due to the fact there is very little early footage which is easily accessible of the founding Reggae musicians.  Most of the footage that does exist is scattered across the globe in archives and private collections and is often difficult and costly to access,” Grange said.

“A music, as important as Reggae, needs to have its film history documented and preserved for future generations, so that they can appreciate and have a good understanding of the music and the people who created it.”

Grange also said that several Reggae legends have never been seen on film.

“Some people will know their music, but will have only ever seen photos of the artist; so to have moving images of them at work is of great importance.”

The Culture Minister explained that the database will be an innovation that will preserve the hundreds of documentaries, feature films and videos to enable study and research, as well as viewing of films that record Jamaica’s Reggae music history.

More than 200 films, collected during the staging of the Reggae Film Festival, between 2008 and 2013, will be donated by film festival organiser, Barbara Blake-Hannah, to begin the database, which will be added to, by films from Reggae Films UK archivist, Peter Gittins.

Grange said it was her intention that “one day people will be able to come into the National Library of Jamaica, type in the name of any Reggae practitioner and be able to view a long list of all the films that exist of that particular artist/musician, to learn from, to teach about and to spread Jamaica’s musical gift to the world”.