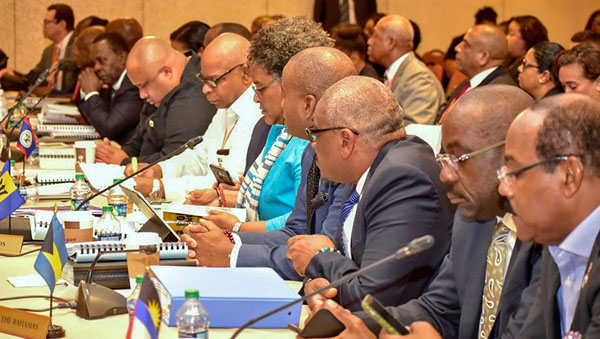 Barbados’ Prime Minister, Mia Amor Mottley (in blue), and CARICOM Heads of Government during one of the sessions at the 30th CARICOM Intersessional Meeting in St Kitts and Nevis. Photo Barbados' Prime Minister’s Office.

BASSETERRE, St. Kitts and Nevis, February 28, 2019 (CMC) – Barbados Prime Minister, Mia Mottley, on Tuesday, warned that the future of multilateralism is being threatened at the “very time it is needed, more than ever, and urged Caribbean Community (CARICOM) countries to put aside their differences and further develop the much-heralded CARICOM Single Market and Economy (CSME).

The CSME allows for the free movement of goods, skills, labour and services across the 15-member grouping and Mottley, addressing the two-day CARICOM inter-sessional, held meeting in St. Kitts and Nevis, said that the special CARICOM meeting, on the CSME, held in Trinidad and Tobago last December, had achieved much in the way of putting the initiative back on the front burner.

“The opportunity to have had two days of dedicated discussion has really made a fundamental difference in the trajectory that we can see now, and the progress we can garner going forward.

“The difficulty, of course, is that all of us returned to our countries and became consumed with the items that informed national development. But if we have learnt one thing in the last few months, it is that the future of multilateralism is threatened, at the very time it is needed more than ever,” she added.

She said small states, such as those in the region “will only survive, not just economically, but in the world of diplomacy, in the context of strengthening democracy” and that “more than ever, we need to stay together, whether it is in fighting the European Union, with respect to the blacklisting issue…whether it is in respect to our position on Venezuela, which ironically, has become predominately the mainstream position of the world, in that six weeks ago people were not calling for dialogue”.

“In fact, countries were rubbishing the notion of dialogue first, people were still remaining silent or in fact openly advocating military intervention. Now all but one, have literally repudiated  the military intervention. With respect to humanitarian aid, there’s only one mechanism that  the world knows that is impartial for the delivery of humanitarian aid and that mechanism has been in place for 69 years…and that is the UNHCR…”

Mottley said CARICOM has been the vehicle that has allowed regional countries to take “that principled decision”.

‘The bottom line, however, is that our economies are not necessarily capable of surviving on their own in this difficult and turbulent world. We believe that there may be fights…(and) the disruption to the multilateral trading environment and dispute-resolution  mechanism are just the symptoms of the underlying  war that is taking place in today’s world,” she noted.

“The bottom line is that these are other skirmishes and battles that are being fought and it is against that background that we have been viewed as a relevant to the process both diplomatically and economically.

“Our only way out is to turn this region into an economic, power of note, within the Americas. It cannot happen with individual countries trying to put one plus one plus one, one by one by one. But if we come together, in the context of a strong single economy and a strong single market, all of a sudden it looks different,” she argued.

Mottley said in realising this, the estimated population in the Caribbean is equivalent to California, the fifth or sixth largest economy in the world.

“Where is the Caribbean and at what point do we determine that a land space needs a greater level of population to drive economic growth and smarter decisions and seamless decisions to be able to fuel that economic growth.

“That is what we are seeking to do within the context of the CSME,” she told the summit, adding, but there are a few strategic things that must happen.

“We are believing that because it is the Carnival season we take three steps forward and two steps back and that we must chip our way down the road, instead of realising that that battle towards the dominance…requires a Usain Bolt approach and not a Carnival-like approach to the movement of the CSME.”

Mottley said that she is a “bit embarrassed” that having sat in Trinidad and taken decisions  on the movement of agricultural workers and security guards, the tail appears to be wagging the dog.

She said, in reference to CARICOM, it appears that the Council for Human and Social Development (COHSOD) appears to be wagging the CARICOM leaders, and has determined that they cannot reach  definitional arrangements and agreement as to who is an agricultural worker in the Caribbean.

“Now if there is one category of worker that perhaps has dominated the passage of time in the Caribbean, it has been agricultural workers, and if the second generation of independence leaders cannot come to proper conclusion as to who constitutes an agricultural worker  and that is now going to hold up a conference from  moving forward, such that the people of Suriname can see greater agricultural expansion  and production…then we have to begin to ask ourselves what are we really doing with the governance.”

She said it is not the problem of decisions taken at the summit, “it has to do with the fundamental governance of this institution, because we need to be dealing with the strategic issues here, and not having to now remove the cobweb, not just on agricultural workers…”

Mottley said she found it difficult to face the media, on Wednesday, at the end of the summit, and tell the region “that the contingence rights, the protocol that we signed in July, still cannot be provisionally applied, because we do not have enough member states who have signed and that, in spite of …the grand declaration in Montego Bay (last July) that we are not in a  position to guarantee, in accordance with the treaty…a framework for dependents and spouses”.

She said Barbados has taken a position that it would go further than the existing measures “largely because we believe you cannot separate a dependent from a spouse.

“So the notion that only a spouse to get the benefits of the rights, but dependents are not, is a nonsense that carries us back to the separation of families, in a time we would want to forget,” she added.

The Caribbean media Corporation (CMC) has been reliably informed that among the countries opting out of the protocol on contingency rights include Antigua and Barbuda and St. Kitts-Nevis.