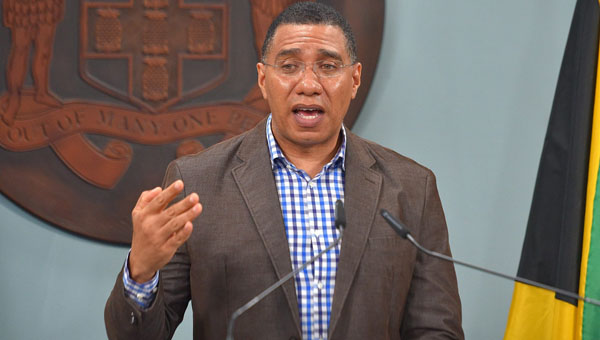 KINGSTON, Jamaica, June 13, 2020 (CMC) – Prime Minister Andrew Holness, yesterday, described the murders of two police officers and the injury to two others, during an early morning ambush by gunmen, as “an immeasurable tragedy”, and vowed “we will not rest, until the perpetrators are brought to justice”.

The names of those killed or injured have not yet been released, but the Jamaica Observer newspaper reported that Police Superintendent, Leon Clunis, was one of the police officers injured in the attack, that occurred in St. Catherine, a parish in the south-east of the island, during the early hours on Friday.

Police Commissioner, Major General Antony Anderson, said lawmen are following strong leads, in relation to the shooting incident, and that thorough investigations were being conducted, as the police attempt to piece together, what happened during what was described as an intelligence-driven operation.

A strong deployment of investigators, scene of crime officers, along with sniffer dogs, have been combing the scene for clues. Police have cordoned off an area, where the early morning shooting took place.

In a statement, Holness said that he was “deeply saddened” at the events which resulted in the death “of at least two members of the Jamaica Constabulary Force (JCF) and the serious wounding of two others, while on operation, early this morning”.

“When they leave their families and loved ones, to police our streets and our communities, the thought that they may not return should not be foremost in mind. Yet, that is what happened, to hard-working members, this morning, as they conducted their lawful duty, to rid our society of criminality and put criminals behind bars,” the Prime Minister stated.

Holness said that his “heart is pained at this time, and I cannot imagine the despair the families must be feeling. My heart goes out to them and I express my deep, deep condolences”.

He acknowledged that “words are insufficient to convey my sympathies for the families and the members of the Jamaica Constabulary Force, who are grieving an unimaginable loss at this time, adding “my thoughts and prayers are with the families of all the officers, and our collective hearts grieve with you”.

“The government will provide every support to the families, and the police high command will leave no stone unturned, in bringing those responsible, to justice. We will not be deterred,” Holness promised, adding “those responsible for the slaughter of our officers should find no safe haven, they must be captured”.

“Rampant criminality is a stain on our society, and the murder of these officers speak to the level of depravity of these criminals. I know this must be a trying time for the JCF. However, I want the committed and hard-working members of the JCF to know that all well-thinking Jamaicans stand with you. Do not be discouraged,” Prime Minister Holness said.

He called on the public to cooperate and support the police, urging them not to protect criminals.

“Even in a time of crisis, the criminals are at work. We must redouble our efforts against criminal elements. They must face justice,” Prime Minister Holness said.

Opposition Leader, Dr. Peter Phillips, condemned the incident, saying “the attack on members of our security forces is an attack on the people of Jamaica”.

“This brutal act, by criminals, must not only be condemned, but we must stand with the members of the Jamaica Constabulary Force in this time of grief, and pray for full recovery of those injured.

“Those, who insist on a path of criminality, must be relentlessly pursued, to the fullest extent of the law. We must, and we will, fight on,” he said, extending condolences to the families of the officers, who were killed.