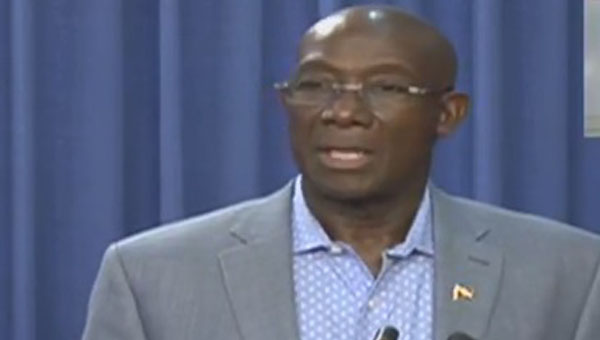 PORT OF SPAIN, Trinidad and Tobago, May 19, 2020 (CMC) – The Trinidad and Tobago government announced, on Saturday, plans to speed up implementation of the second phase of the strategies to re-open the local economy, but reiterated the need for nationals to continue to embrace measures that would curb the spread of the coronavirus (COVID-19).

Prime Minister, Dr. Keith Rowley, speaking at a news conference, here, said that the manufacturing and construction sectors would be allowed to operate, in full, as of Thursday, after indicating that health experts were encouraged by the response to the first phase that began last week Monday.

Motor mechanics and tyre shops, as well as laundries, will also be allowed to open, from Thursday, and Rowley added “we would have loved to have open up a bit more, so that personal services, meaning barbers, hairdressers and domestic workers, to go to work, because these are people, many of them are at the lower end of the earning scale”.

“We know you are hurting, but the circumstances are such that your area is the area that poses the greatest threat,” Rowley said, noting that some domestic workers are employed by more than one family.

The Prime Minister said as a result of more people coming into the public domain, the police would ensure that public transport adhere to the measure of social distancing, by having 50 percent of their normal passengers on board, and that to help ease the financial loss, the Ministry of Finance would be providing a TT$2,000 fuel grant support to taxi owners.

“We will do nothing to tempt a relapse, to cut back the gains we have made,” Rowley said, reminding reporters that many countries that had eased the various measures to curb the spread of the virus, were now experiencing increased cases.

“Do not, for one minute, believe that the pandemic is a hoax or it is over,” he said, noting that during the past week, he had gotten the impression “the paramountcy is no longer about saving lives, but making money”.

The Head of State warned against making “grievous errors, which will have a worst effect on the tribulations that we having now with the economy, because if we do anything that results in us having to go back to the beginnings and do the shut downs and the stay homes and so on, we will hurt more, economically”.

“The thing you do is, to continue to measure the risk; follow the science; make opening up decisions, based on our understanding of the threat that could come; and also how much we have been successful,” Rowley said, in an apparent reference to some members within the private sector, who had been calling for small businesses to be allowed to re-open now, instead of a few weeks later.

“The biggest threat, we face right now, is to subsume national interest with self-interest, and to listen, carefully, to the voices, who will tell you that I am safe, because my family and I will be in a safe place, because you put them in a safe place. Look at who have been dying around the world in response to this virus, dying largely because of how they live, where they live, and how they cannot withdraw, they are the ones who are dying and that’s a distinction you have to make,” Rowley noted.

Rowley said that while the government would not mandate any law, ensuring that persons wear masks in public, he, nonetheless, said “no mask, no service” would be provided to anyone entering a business place.

He reiterated his government’s position to close the borders, saying “its closure is as important now, as when we closed it, because if we are to preserve and strengthen the condition within the country, the biggest risk…is persons coming from the outside and bringing to us the virus and, worse yet, getting into the national community and causing it to be spread”.