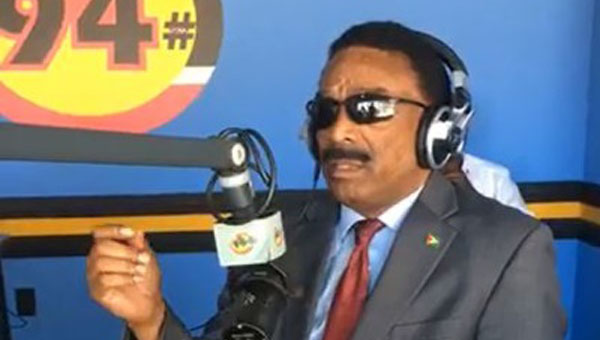 GEORGETOWN, Guyana, March 27, 2019 CMC – Attorney General, Basil Williams, said, yesterday, he remains confident that the coalition government would be victorious, when the Trinidad and Tobago-based Caribbean Court of Justice (CCJ) hears the case, filed by the main opposition party and others, regarding the Court of Appeal’s ruling, last week Friday, invalidating the no-confidence motion (NCM), passed against the government, last December.

Williams, who is also the Minister of Legal Affairs, told radio listeners to the midday show on 94.1 FM, that the decision of the Court of Appeal came as no surprise to the government, which has argued that 34 votes were needed to make valid the December 21, 2018 NCM vote.

He said that a precedent has also been set, in determining a majority for a vote of no-confidence in the Caribbean.

“I have always been confident because, in following the principles of stare decisis, are they going to ask the CCJ to overturn the position of the immediate-past President of the CCJ (Sir Dennis Byron) and secondly, the rounding-up principle was a decision of the current President of the CCJ, the Honourable Chief Justice Saunders,” the Attorney General argued.

Last Friday, the three-member Court of Appeal, by a majority decision, ruled that the NCM was invalid, after the government had challenged a High Court ruling, in January, that had validated the motion that had been filed by Opposition Leader, Bharrat Jagdeo.

But in its ruling, the Court of Appeal said that the motion had to be passed by 34 — instead of 33 — of the 65 National Assembly members, in order to have been valid.

Chancellor of the Judiciary, Yonnette Cummings-Edwards, and Justice Dawn Gregory ruled that the threshold, required for a no-confidence motion, was 34 votes, while Justice Rishi Persaud provided a dissenting ruling.

Williams said that the ruling indicates that the justice system, here, is working and that it has been a practice of the opposition to criticise judges, whenever they lose a case. 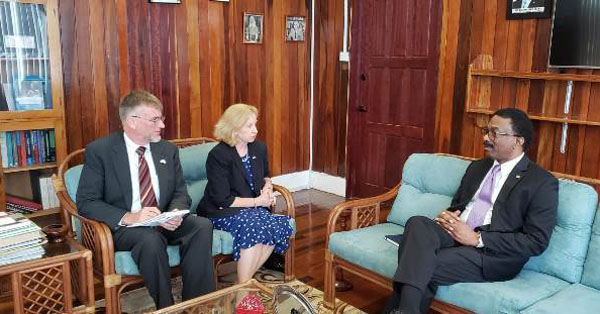 Attorney General and Minister of Legal Affairs, Basil Williams, was paid a courtesy call, in his office, by United States officials in Guyana, Ambassador, Sarah-Ann Lynch, and Consul General, Jerome N. Epping Jr, last week Wednesday. The trio held “deep” discussions, which focused, primarily, on the legal responsibilities between the two countries, among other things, according to the Guyana’s Department of Information.

Meanwhile, lawyers for Opposition Leader, Jagdeo, who is also GeneralSecretary of the Peoples’ Progressive Party-Civic (PPP-C), and chartered accountant and attorney, Christopher Ram, have filed an application with the CCJ seeking special leave to appeal the Court of Appeal ruling.

The application is asking for an order to grant special leave to Jagdeo, to appeal the recent majority judgement of the Court of Appeal, delivered last Friday.

Attorneys, Mendes, Maharaj, Nandlall, Bharath and Satram, are also seeking: another order that would set aside or reverse the Court of Appeal’s ruling and resort to acting Chief Justice, Roxanne George’s ruling, handed down on January 31; a declaration that the resolution of the National Assembly is valid; a second declaration that the NCM, moved by Jagdeo, was validly passed on December 21, 2018; and another declaration, to put to rest that 33 votes/members constitute a majority of all the elected members of the National Assembly, within the meaning of Article 106 (6) of the Constitution of Guyana.

The application is also seeking costs.

Nandlall has said that he expects a CCJ case management conference, on Friday morning, in respect of the filing, adding, “We expect that directions will be given by the Court, which will bring about an early hearing and determination of the appeal.”

Ram’s attorneys, Kamal Ramkarran and Devindra Kissoon, are asking the CCJ to hear the application, urgently, and give a ruling, within seven days, as is necessary, in order to prevent the “violation of the Constitution” and “the threat to democracy and adherence to the rule of law” that follow from that violation.

Ram argues, through his lawyers, that the Court of Appeal erred in its ruling that 34 votes were needed to pass the motion, as against the 33 that were obtained in the 65-member National Assembly.

In addition to asking the CCJ to either reverse or set aside the ruling, the attorneys are also asking, on behalf of their client, that the CCJ, Guyana’s highest court, among other things, validate the December 21 passage of the motion by the National Assembly and order President David Granger and the Guyana Elections Commission (GECOM) to ensure that elections are held, no later than April 29 this year.