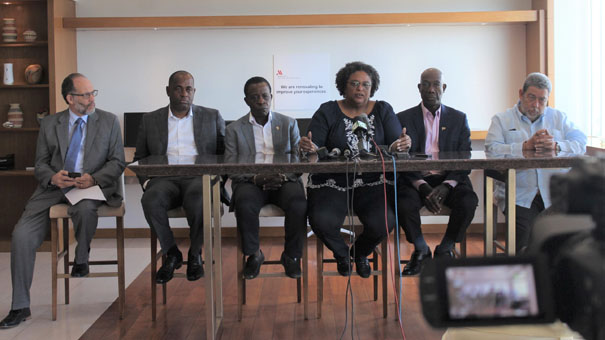 Flanked by her colleagues, from Trinidad and Tobago, Dominica, Grenada and St. Vincent and the Grenadines, Mottley told a news briefing, prior to their departure after a one-day visit, that Guyana is the “home, the seat of the Caribbean Community, Guyana is a founding member of the Caribbean Community and, against that background, we are clear that as a community of sovereign nations, we cannot get involved in the internal processes — but we are family”.

“A family does not stand by and watch others in the family suffer, without making themselves available, to be able to aid in the process. We have tried to do that, but we are also conscious that we will be as successful as the parties themselves want it to be successful,” she added.

On Wednesday, the Acting Chief Justice, Roxane George-Wiltshire, ruled that a declaration, made by the Returning Office in Region 4 — who announced the ruling coalition as the winner of the March 2 election — was “unlawful”, and in breach of the Representation of the People’s Act.

In her ruling, the Acting Chief Justice said the Court orders “that the declaration, made on the 5th of March 2020, by the Returning Officer in District Four, for the total votes cast in District Four, was unlawful as being in breach of section 84 (1) of the Representation of the People’s Act…and is null void and of no effect.”

She said also that the declaration made on the same day “is hereby vacated and set aside”.

“Any act, done in pursuant of the said declaration, is hereby deem null and void and of no effect,” she said, noting also “it would be for the Returning Officer, the Deputy Returning Officer, to decide whether they will restart or continue the process. It is their decision to make”.

“We met with the election observers, and then again, we met with the President and Mr. Jagdeo, very late last night, early into the morning, together, in order to be able to chart a process forward.”

She said there is “no doubt in our minds, that there is at stake, far more than who will be the president of Guyana.

“What is at stake is also the lives and the stability of the people of Guyana. We find ourselves, today, as we speak, in a world that is exceedingly uncertain, that is being challenged in a way that we never contemplated, that the third decade of the 21st century would be challenged in this way.

“It is therefore even more important, for us within the Caribbean Community, to ensure that there is stability, from the North in the Bahamas, to the south in Guyana and Suriname, from the West in Belize, to the East in Barbados.

“And it is against that background, that we have appealed to both sides. Both sides committed to the fact that they want to be able to abide by the laws of Guyana and the constitution of Guyana. They have also committed that they believe that there ought to be a free and fair transparent process,” Mottley said.

The CARICOM Chair said, pursuant to that, they met with the representatives of the two main parties’ Commissioners with GECOM and, “we can only hope that both sides, therefore, will be able to put in place a mechanism that will allow for a fair and transparent process, because, as I said last Saturday, every vote must be counted”.

She said that the Acting Chief Justice delivered her ruling that “was absolutely clear”, that she expects the returning officer to either start anew or complete the process, with respect to the SOPs. (statement of polls).

“And we hope and pray that there will be an adherence to, not just the law of the judgment, but to the spirit of the judgment, because she was very clear in the last few paragraphs of her judgment, as to what she expected, in terms of the spirit and the principal position and the transparent process that is critical if this country is to go forward.”

Mottley said that CARICOM was also hoping that good sense would prevail, on all sides, and that the delegation has asked “both sides to be able to speak to their supporters”, even as she acknowledged “part of the difficulty, in a complex situation like this, is that everyone, if they feel that they are a victim, then the opportunities for disappointment, regrettably, are very much there”.

“And it is against this background, that we pray, that even though a statute puts power in the hands of a Returning Officer, that that Returning Officer will understand that he holds in his hands the future and stability of Guyana, as we go forward, because every vote must be made to count.

“We can’t say it any clearer. And also it must appear to be so, in the presence, not just of the observers but, more importantly, of all of the parties, who contested the election, because everyone has a right to be able to determine whether the process is fair to them. And also whether they have the right to ask for a recount.”

Mottley said she is satisfied that the President and the Leader of the Opposition are aware of CARICOM’s position.

“I’m satisfied that they too have agreed to act in the best interests of this country. But they must now ensure that all, under them too, will act in that way. Failing that, we believe that we will have to continue to keep engaged. This is not a single event.

“This is a process, and we are cognizant that this process didn’t get here overnight ,and it is not necessarily going to be miraculously achieved and changed overnight. But at this point, the most important thing, even as we fight this COVID-19 virus,  is for the people of Guyana to remain calm, to remain patient,  and to allow us to help both sides and their supporters understand that it is only through a transparent and open process that we can go forward,” Mottley said, adding that Guyana is a country is on the cusp of  turning the corner.

“Our fear is that if the process is not transparent, that we put at risk too much, and I therefore hope, that the people of Guyana will work together to ensure that there is calm, there is peace.  One life lost, as I said, last week, is one life too many. Let us not have any other persons affected at this point,” she added.