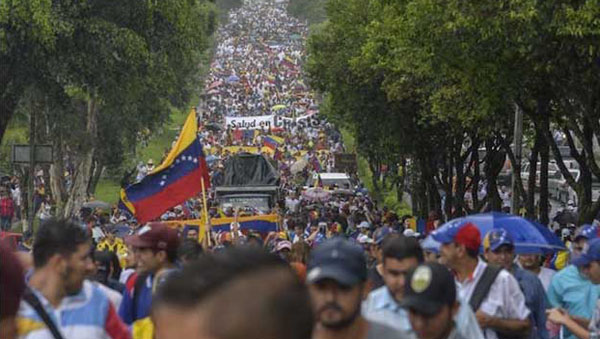 The Crucial Role Of The Military In The Venezuelan Crisis

STOCKHOLM, Sweden April 5, 2019 (IPS)–  In January 2019 Venezuela’s opposition-led National Assembly swore in congressman Juan Guaidó as the country’s interim president. Guaidó’s claim to power is a severe blow against the already weakened government of Nicolás Maduro, whose re-election as president in May 2018 was widely rejected by the international community and deemed illegitimate by over 50 foreign governments.

Since January 2019, about 65 countries—including the United States and countries in Western Europe and most of South America—have given their support to Guaidó. The USA has also imposed sanctions on the state oil company, Petróleos de Venezuela SA (PDVSA), and several state-owned banks.

However, countries such as China, Cuba and Russia continue to back Maduro and recognize him as the legitimate president of Venezuela.

Although the support of foreign states is an important factor in the current political standoff between Maduro and Guaidó, it is the Venezuelan military that will determine whether there is any shift in power. Historically, the armed forces have played a decisive role in the country’s politics: the military oversaw Venezuela’s transition to democracy in 1958 and has had a strong influence on domestic politics ever since.

The 1958 Punto Fijo Pact—the political agreement aimed at preserving democracy in Venezuela in the post-authoritarian period—rested on a compromise with the military: in return for transferring power to civilian hands, the military would have its equipment modernized and its salaries revised.

The administration of President Hugo Chávez (1999–2013) further strengthened the position of the armed forces by populating the state bureaucracy with military officers and implementing large-scale arms modernization programmes, which took Venezuelan military spending to record levels.

This feature of Venezuelan politics has not gone unnoticed by Guaidó, who has attempted to garner support from the armed forces by offering amnesty to defectors. So far, the bulk of the military has remained loyal to Maduro: in the wake of the National Assembly’s appointment of Guaidó as interim president, the defence minister, Vladimir Padrino, stated that Venezuela’s armed forces disavow any president who is self-proclaimed.

Nevertheless, despite Padrino’s assurances, cracks have formed in the military’s support for the Maduro administration. Since February, about 560 soldiers, who recognized Guaidó as the country’s interim president, have fled to Colombia.

Amid these developments, the military is on the cusp of an important choice: preserve the status quo or support a new leader. The final decision will largely depend on the offers made by Maduro and Guaidó.

Military incentives: power, money and arms
Since 1958, the Venezuelan armed forces have traded military support for the government in exchange for money, power and prestige. This bargaining process was reinforced under the Chávez administration, which offered the military political power, money and arms, and strengthened the development of a military–government symbiosis.

One of Chávez’s first and major accomplishments was to approve a new constitution in 1999, creating the Bolivarian Republic of Venezuela, also known as the Fifth Republic. This served as the foundation for the military’s rise to the higher echelons of political power.

Article 328 of the new constitution, for example, incorporated the armed forces into the maintenance of social order and the formulation of Venezuela’s national development plans.

As a result, military officers took on key positions in state-owned companies, ministries and funding agencies. According to Transparencia Venezuela, at least 60 of the 576 state-run companies are led by the military, including PDVSA.

The militarization of the government has continued under Chávez’s successor, Maduro. As of January 2019, 9 of 32 government ministries were controlled by the military, including the ministries of agriculture and energy.

As a consequence, the military’s influence on and within government has grown to a level not seen in Venezuela since the end of Marcos Pérez Jiménez’s dictatorship in 1948.

Off-budget mechanisms
Venezuelan military spending soared under the Chávez administration. In 2006 it surpassed that of Brazil—which at that time had an economy over five times larger than Venezuela’s.

Chávez’s spending was enabled by the unprecedented oil boom that started soon after he took office, which allowed him to strengthen his grip on power by distributing money to his supporters—a long-standing pattern in Venezuelan politics.

However, the total amount of funding allocated to the armed forces since the establishment of the Fifth Republic remains the subject of debate. The uncertain estimates are due to the existence of off-budget mechanisms in military funding.

Off-budget military funding is the allocation of funds for defence functions from outside the regular state budget. This can include revenues from mineral extraction or from military business activities.

However, because the military has been constitutionally integrated into the Venezuelan development strategy since 1999 (Article 328 of the constitution), its activities are eligible for FONDEN’s support. The office of the president has exclusive control over FONDEN, which exempts it from oversight by the National Assembly.

SIPRI’s 2017 review of Venezuelan military spending concluded that since 2005 a substantial amount of the country’s oil revenue and state resources had been diverted to the military using FONDEN. For example, between 2005 and 2015 FONDEN allocated around $6.9 billion to the military to finance 39 projects.

The largest of those was an allocation of $2.2 billion for the purchase of 24 Su-30 combat aircraft from Russia. On average, off-budget allocations from FONDEN increased Venezuela’s annual military spending by 26 per cent for the period 2005–15.

As FONDEN is funded primarily by oil revenues, its level of contribution to Venezuelan military spending each year reflects the annual fluctuations in oil prices. Between 2005 and 2015 its contribution to military spending ranged from 42 per cent in 2015, which coincided with rising oil prices, to as little as 1 per cent in 2009 and 2014, when the price of oil fell sharply.

In comparison with its allocations to other funding recipients between 2005 and 2015, FONDEN’s allocations to the military were substantial. The $6.9 billion given to the military dwarfed the $2.6 billion allocated to education and health, demonstrating a clear shift in the purpose of the fund towards militarization as opposed to development.

Through FONDEN, the armed forces have gained direct access to Venezuela’s substantial oil revenues. These funds were used in a variety of ways: for instance, $5.1 million was paid to fund the education of 40 Venezuelan cadets in Belarus in 2010, while $106 million was allocated to the general category ‘Complementary Agreement on State Security and Defence’ (Acuerdos Complementarios de Seguridad y Defensa de Estado).

However, the bulk of FONDEN’s allocations to the military was used to boost Venezuela’s ambitious military modernization programme. Chávez saw the build-up of arms as a fundamental step in sustaining his revolutionary regime: “When I talk about armed revolution, I am not speaking metaphorically; armed means rifles, tanks, planes, and thousands of men ready to defend the revolution.”

Oil revenues became the chief contributor to Chávez increasing the power of the presidency and the military force of Venezuela. Venezuelan arms imports grew significantly in the 2000s and early 2010s. The vast majority of these imports came from Russia and China.

The military maintains its strength, despite the economic downturn
Maduro became president of Venezuela after Chavez’s death in 2013 and inherited his carefully constructed militarized state apparatus. However, unlike his predecessor, Maduro came to power in a harsh economic environment. Oil prices plunged in 2014, which exacerbated the country’s economic downturn.

Venezuela has found itself embroiled in the biggest economic and social crisis of its recent history. Salaries have been negatively impacted by hyperinflation, while basic goods have become extremely scarce.

Violence has also spiked. Severe living conditions have led more than three million Venezuelans to flee the country, while millions of those who remain are calling for change.

As a reaction to a rapidly shrinking economy and falling oil production and oil revenue, Maduro turned towards the country’s food supply as a source of patronage, a commodity that went from subsidized to scarce. By exploiting a complex currency system, members of the military were able to import food at an advantageous rate of exchange and then sell it on the black market for hundreds of times the government set price.

While these privileges appear to have swayed the military to support the Maduro administration for the time being, they are mainly aimed at officers, and many lower-ranking soldiers face the same hardships as ordinary Venezuelan citizens.

In addition to its role in the exploitation of the food supply, the military occupies a position of privilege during the allocation of the state budget. Official military spending is prioritized over vital social needs such as education, housing and food.

In 2017, Maduro used his presidential prerogative to bypass the opposition-led National Assembly and approve a new budget that benefited his allies. As the rate of inflation soared into thousands of per cents in 2018, additional funding was needed for all government sectors.

Not only was the military one of the first to receive the additional resources, but it was also among the sectors that received the highest allocations of the new funding. This is not the first time the military’s budget has been protected from significant cuts—far from it. In 1962, while total public spending was cut by 12 per cent, the military budget was reduced by only 4 per cent.

The discrepancy was even greater in 1979: despite a 15 per cent reduction in total public spending, the military budget was cut by only 0.4 per cent. Thus by giving the military control of the country’s food supply and prioritizing the military in state budgets, Maduro has continued the long tradition in Venezuela of trading resources for political support in a bid to retain power.

By giving the military money, power and prestige, Maduro has—at least for the time being—‘bought’ the political backing of the armed forces. The challenge faced by Guaidó is arduous: he must somehow win over the support of a military that owes its strength to the current regime.

So far, Guaidó has offered amnesty to defectors. He has also appealed to the military’s sense of nationalism, arguing that his claim to the presidency is a people’s demand to which the armed forces should heed.

Considering the set of benefits from the current patronage system, such as the billions of dollars on offer from off-budget sources and the positions of privilege in key government posts, Guaidó might need to offer the military the same, if not better, incentives than those it has received under Chávez and Maduro.

Yet, therein lies the conundrum: if Guaidó courts the military into backing his plea by offering material incentives, he will empower the military further and be complicit in replicating one of the main weaknesses of Venezuela’s democracy.