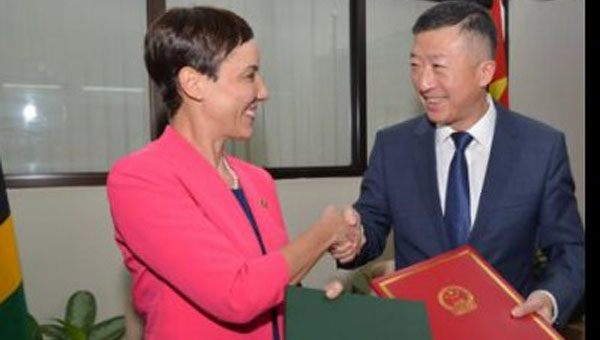 KINGSTON, Jamaica, April 12, 2019 (CMC) – Jamaica has become the latest Caribbean country to sign on to China’s Belt and Road Initiative (BRI), which Beijing says now opens up a new era for cooperation between the two countries.

She told the signing ceremony, yesterday, that over the past 47 years, the two countries have forged a mutually-beneficial and dynamic partnership, and currently enjoy a robust and dynamic cooperation program.

She noted this has resulted in many tangible outcomes, such as the acquisition of Alpart in 2016 by Chinese entity, Jiuquan Iron and Steel Company (JISCO), and the proposed development of an Industrial Park and Special Economic Zone, alongside the JISCO/Alpart operations, as well as the completion of two state-of-the-art early childhood institutions.

“Our relationship has been built on the principle of mutual respect, a shared commitment to responsible growth and development, as well as a common desire to positively impact the lives of our citizens,” she stated at the signing ceremony.

“By doing so, we join over 100 other countries and international organisations that have also decided to cooperate, within the framework of the Belt and Road Initiative,” Johnson Smith added.

Beijing’s BRI is an international development strategy, through which China seeks to leverage partnerships in a build-out of its economic and geopolitical power.

Jamaica joins several Caribbean countries including Barbados, Suriname, Trinidad and Tobago and Guyana that have signed on to the BRI and, according to Tian Qi, the Chinese ambassador to Jamaica, the agreement raises the level of bilateral cooperation to a higher bar.

“This signing is hugely significant, and it now opens up a new era for cooperation between Jamaica and the People’s Republic of China,” he said, adding that the soon-to-be-constructed 220-bed Western Children’s Hospital in Montego Bay was also a symbol of deepening integration.

“Jamaica has decided to further strengthen and deepen the bonds of cooperation with China, by signing this MoU. In doing so, we join over 100 other countries and international organisations that have also decided to cooperate within the framework of the Belt and Road Initiative,” Johnson Smith said, observing that the two countries must now identify specific proposals, and develop a mechanism for projects and programs for potential agreements.

The Belt and Road Initiative was first proposed by China in 2013, and is designed to facilitate physical, economic, digital and social connections, between China and participating countries.