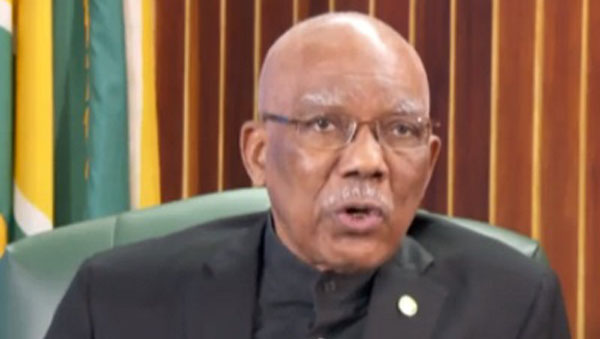 In its statement, the David Granger-led APNU-AFC coalition government said that it “regrets the interpretation, given to the motion”.

GEORGETOWN, Guyana, April 30, 2019 (CMC) – The Guyana government, yesterday, defended its decision to pass a resolution in the National Assembly, paying tribute to former legislator, Abdul Kadir, who died in a United States prison, after he was convicted on terrorism-related charges, there.

“It is well known that there is a time-honoured convention of the National Assembly to observe, in a standard and solemn form, the work of former Members, who are deceased. The observance of this tradition has never been selective, and has included, over the decades, persons of all political parties and persuasions, who served in the National Assembly,” the government said in a statement.

The United States government and the main opposition People’s Progressive Party-Civic (PPP-C) had criticised the decision, with Washington saying that legislators, here, had chosen “to honour a man, who conspired to kill innocent people, from across the United States and around the world.

“This resolution is an insensitive and thoughtless act, which demonstrates the National Assembly’s disregard for the gravity of Kadir’s actions,” Washington said.

The PPP-C condemned the resolution, saying that the use of the National Assembly, the country’s highest decision-making body, to honour the former A Partnership for National Unity (APNU) legislator “is another act of betrayal of democracy and the rule of law, as it is clearly not reflective of the will of the people”.

The PPP-C did not attend the parliamentary sitting, when the resolution was passed, as part of its boycott of the legislative body until the Trinidad and Tobago-based Caribbean Court of Justice (CCJ) rules on its appeal, challenging the Court of Appeal ruling that invalidated the motion of no confidence, against the coalition government, passed on December 21, last year.

In its statement, the David Granger-led coalition said that it “regrets the interpretation, given to the motion”, adding “the government of Guyana asserts that it had no intention of conveying the impression that the motion was designed to honour a former MP, convicted of terrorism in another jurisdiction.  The motion recognises the member’s service as a parliamentarian”.

Legislators of the coalition government, last Friday, approved of the motion, tabled by Junior Minister of Agriculture, Valerie Patterson-Yearwood, who said “the people of Linden and Guyana have lost a great man, a stalwart, a bold and courageous man”.

“I ask this Parliament, this National Assembly, that we direct an expression of its sympathy be conveyed to his sorrowing widow, children, grandchildren and relatives,” she told Parliament, in reference to Kadir, who served as a legislator, here, from 2001 to 2006.

Kadir, a chemical engineer, was also a former Mayor of Linden from 1994 to 1996, an engineer in the bauxite industry and the Guyana Water Inc and member of the bipartisan parliamentary Natural Resources Committee.

Kadir, who had been arrested in Trinidad, died in a US prison on June 28, last year. He was convicted and sentenced in the United States in 2010, along with three other men, for plotting to blow up gas pipelines at the John F. Kennedy (JFK) Airport.

In its statement, the US Embassy noted that Ambassador Sarah-Ann Lynch had, while speaking at an International Peace Conference recently, held up Guyana as “a model to the world on religious tolerance and understanding.

“The National Assembly’s resolution of April 26 draws into question that reputation,” it said, adding that it also comes on the heels of Guyana’s historic cooperation with the United States on the extradition of an alleged murderer.

But the Guyana government said it “continues to condemn terrorism, in the strongest possible way. “The government of Guyana reaffirms its commitment to continue and intensify the fight against terrorism, in any form, and is proud of its record, to date, in this regard.”