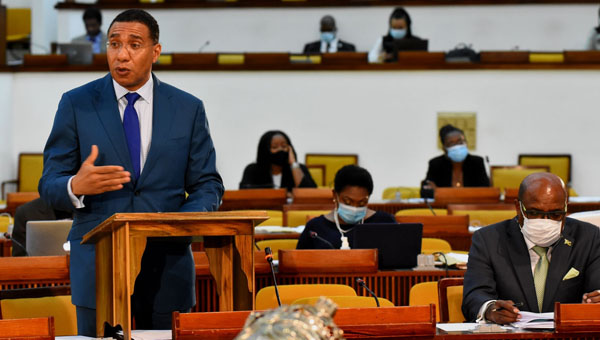 Prime Minister,. Andrew Holness (at lectern), highlights a point, while making a statement regarding recent heavy flood rains, during the sitting of the House of Representatives on Tuesday. Also pictured (at right) is Minister of Tourism, Edmund Bartlett. Photo credit: Mark Bell/JIS.

“There are…some communities that shouldn’t be where they are… there are some areas, which we will have to declare as no build zones,” the Prime Minister declared.

Holness, who was making a statement in Parliament, on Tuesday, regarding the damage to infrastructure, caused by recent flood rains, noted that the government will have to put policies in place to prevent persons from building houses in unsafe areas.

“In the face of these significant weather events, houses, perched on hillsides that have been denuded, we know those houses are going to be at risk… we know we are going to have landslides; houses built on marginal lands, such as gully banks, we know that when there is significant rain… these houses are going to be flooded out. At some point, as a society, we must come to the understanding that you cannot choose to go and live anywhere you feel,” the Prime Minister said.

He pointed to the unfortunate incident in Shooters Hill in rural St. Andrew, during the heavy rains, last week, which resulted in the death of a father and his teen-aged daughter, whose home was built in an unsafe area.

The Prime Minister emphasised that the government has to develop a clear policy on urbanisation and planned communities to, among other things, address this issue of unsafe building practices and to prevent a recurrence of this tragedy.

He noted that this is the task of the newly-formed Ministry of Housing, Urban Renewal, Environment and Climate Change.

Prime Minister Holness noted that when the government made the commitment to build 70,000 new houses, it was not a political promise, but a recognition of the need for affordable houses, “so we can attract people from going to take up marginal lands, hillside lands, unsafe lands to build on and, instead, reside in formally developed and constructed communities”.

“It is going to take some time, but I wish to assure the nation, that we are serious about making Jamaica a safe and resilient country, and part of the resilience is that we must not build where we know there will be a disaster looming,” he said.