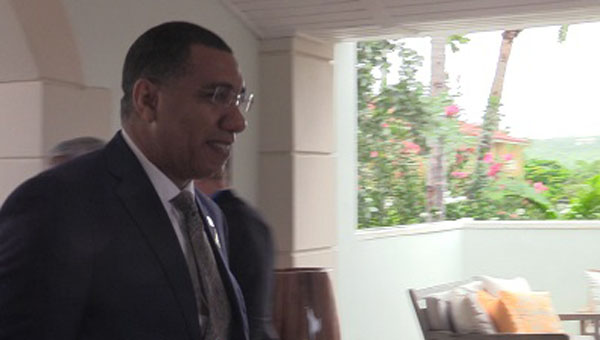 The CDF is an institution of CARICOM with a mandate to provide financial or technical assistance to disadvantaged countries, regions and sectors in the Community.

According to the CARICOM website, in this capacity, the CDF is central to addressing the disparities among the member states of CARICOM, which may result from the implementation of the CARICOM Single Market and Economy (CSME) that allows for the free movement of skills, good, services and labour, across the 15-member grouping.

CARICOM sources told the Caribbean Media Corporation (CMC) that Jamaica stormed out of the caucus meeting, last night, as the issue was being discussed, with Prime Minister Andrew Holness apparently disagreeing with his regional colleagues, on the position adopted for the contributions to be made by the so-called more developed countries of CARICOM.

Holness did not speak to reporters when he arrived at the venue for the summit on Friday, but informed sources said that Kingston is questioning the accuracy of the report of previous meetings on the matter.

They said Jamaica is claiming, its position is to opt out, at this point of time, of making a contribution to the CDF, while  some Caribbean countries, such as Barbados, Trinidad and Tobago, Antigua and Barbuda, St. Vincent and the Grenadines,  and St. Kitts-Nevis,  contend that they cannot opt out and that it is an obligation of each member by way of Treaty.

Further the sources said that the other Caribbean countries argue that if Jamaica cannot pay at this point in time, they should acknowledge that they owe and make it a debt payable.

Jamaica responded that it would be “unfortunate”, and any attempt to blame Kingston for any failure of this meeting will be “resisted”.

Grenada’s Prime Minister, Dr. Keith Mitchell, told CMC that while he would not want to comment on the situation, the CDF is a fund “meant to help the less developed countries …to deal with the problem of the inbalance in trade issues.

“Jamaica indicated that it has some financial problems that it has to deal with, and I think a decision was made, years ago, for the second tranche. So there was an issue concerning this, and I think Jamaica is in the best position to answer for themselves on that,” Mitchell told CMC.

Trinidad and Tobago Prime Minister, Dr. Keith Rowley, told CMC that “virtually all Caribbean territories have resource issues. What we have confirmed is that as part of the treaty, by way of treaty clauses, as we operationalize the CSME, there is a requirement to look after the needs of the LDCS through the clause that says we have to set up this CDF, which gives them a benefit.

“So the MDCs — Jamaica, Trinidad and Tobago and Barbados — who will be the major beneficiaries of the CSME, accessing the markets of the smaller countries that do not have the same capacity to benefit from the CSME. So the treaty makes provision for those countries in the MDCs to fund this CDF,” Rowley explained.

But he said, as had been discussed when regional leaders held a special summit on the CSME in Trinidad last December, “to operationalize the CSME, the requirement to fund the CDF is now upon us, at a time when all of us have financial constraints.

“So what we are saying is that we should not allow our financial constraints to prevent us from operationalizing the CSME, but having said and done that, we must now, to the best of our ability, accept that responsibility to fund the CDF and find an agreedable arrangement.”

Rowley added he believes “we have an understanding, what we discussed yesterday and discussed going forward, is encouraging everybody to pay up”.

“You live in the Caribbean, you know how it is, whether it is UWI (University of the West Indies) …we usually have to encourage people to make their payments,” Rowley told CMC.