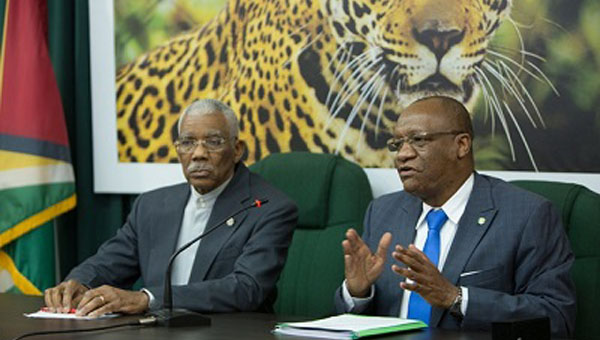 Guyana President, David Granger (left), and Director-General of the Ministry of the president, Joseph Harmon, seen speaking to reporters.

GEORGETOWN, Guyana, July 5, 2019 (CMC) – President, David Granger, says the government is bound by the Constitution, after holding talks with Opposition Leader, Bharrat Jagdeo, regarding the appointment of the chairman of the Guyana Elections Commission (GECOM), yesterday.

“There were several issues on the agenda, but the main issue was to seek agreement on the means to be adapted for the nomination and appointment of the Chairman of the elections commission,” Granger said, following the one-hour meeting.

The Trinidad-based Caribbean Court of Justice (CCJ) ruled last month that the appointment of the former GECOM chairman, retired Justice James Patterson, was flawed, and had urged the parties to meet in a bid to  resolve the matter.

Director-General of the Ministry of the Presidency, Joseph Harmon, said both sides have agreed to meet again very soon.

“The meeting agreed that the process will be completed in a shortest possible time, in fact, the President indicated that he would like to see this process completed within days,” Harmon disclosed.

Harmon said that as a consequence of the CCJ ruling, and following the meeting, Jagdeo can submit the list he previously presented and that would not be viewed as a resubmission. 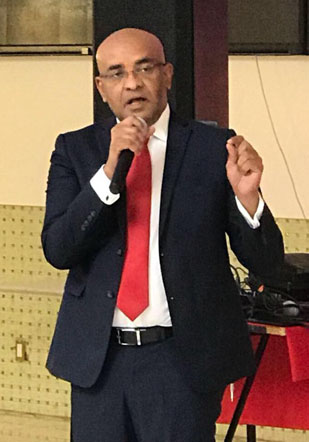 Jagdeo had earlier described the meeting as promising, and noted “we had a relatively productive engagement”.

Jagdeo added that they both expected that it should be settled “in a matter of days”.

“We are hoping that with good-faith negotiations on both sides, that we can resolve the matter of the new Chairman of GECOM,” he said.

Granger told reporters that both sides feel that unless or until the chairman is appointed, the work of GECOM will not be able to go, ahead as quickly as possible, even as he reminded journalists that the government remains adamant about “free and fair elections”.

President Granger said, in going forward, he remained bound “by the Constitution Article 161, and there has been no variation from our position or the opposition’s position on the validity of that article”.

“We are also bound, now, by the interpretation of the Caribbean Court of Justice, which has spoken, twice, on the issue of elections,” Granger said, adding that the decision to meet with Jagdeo is in keeping with the position of the CCJ, Guyana’s highest and final court.

The two sides are expected to name representatives to discuss the nominees to be submitted, and Jagdeo reiterated that it is his constitutional responsibility to submit the names to the President, even as he acknowledged that Granger could still suggest names.

“We are not averse to him suggesting names too, but the constitutional responsibility to submit the names is that of the Leader of the Opposition, and so the CCJ ruling did not change the constitution,” he said.

Granger had earlier sought to clarify the issue as to whether or not he could make recommendations to the list of six to be submitted to him by Jagdeo.

“I can’t recommend to myself; the recommendation must come from him [the leader of the opposition] to me, and I will make a selection … But the CCJ’s ruling… allows the two sides to hammer out suitable persons from the list.