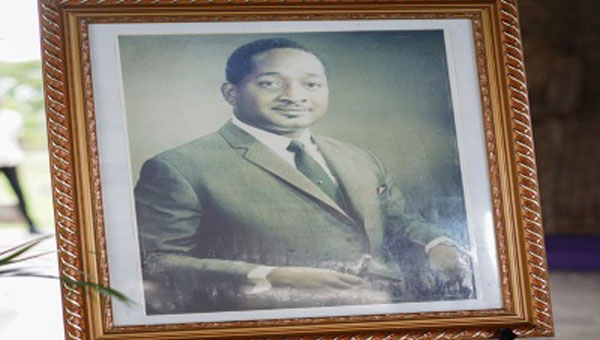 GEORGETOWN, Guyana, August 7, 2019 (CMC) – Guyana marked the 34th anniversary of the death of its first executive president, Forbes Burnham, with the present holder of the office, David Granger, making reference to his “peerless contribution to national development”.

Burnham was the first elected Minister of Education in British Guiana in the short-lived Peoples Progressive Party (PPP) administration of 1953. He was elected Premier in 1964, at the age of 41, years and set about the task of laying the foundation for the evolvement of the nation.

Granger said that Burnham — who died at 62-years-old while undergoing surgery in 1985 — believed that public education was the cornerstone of social justice.

He recalled Burnham as saying that “education is the cornerstone of equality and one of the chief instruments for the abolition of snobbery and the removal of discrimination”.

In his address at the Mausoleum, Place of Heroes, at the Botanical Gardens in the capital, President Granger said Burnham aspired to establish an educational system, in which rural and hinterland schools would be as efficient as those on the coastland.

“He believed that, if the nation was to improve its citizens’ quality of life, it had to provide them with the best quality of education.

“Forbes Burnham’s first decade in office – 1964-1974 – was one of tremendous transformation of the public education system, making it more relevant to the national situation at the time and to our people’s aspirations for the future. He reinforced the bases of universal primary and secondary education and moved tertiary education from being the privilege of an élite few to an entitlement of everyone,” Granger noted.

“Forbes Burnham gave effect to free public education by expanding opportunities for all. He entrenched free education as an entitlement in the Constitution of the Cooperative Republic of Guyana, which still mandates that every citizen has the right to free education from nursery to university.

“We are encouraged by his example. We are inspired by his vision. We, his heirs and successors, recommit to perpetuating his legacy of free public education. We remember him with reverence and respect,” Granger told the ceremony.